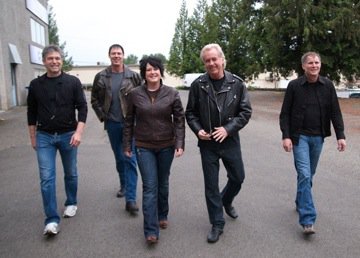 Synergia Northwest 2010 promised music fans a trip down memory lane with former members of Heart reuniting for the first time in over 30 years,  as well as orchestral maneuvers of Yes music featuring Alan White and some other amazing performances by some of the finest musicians in the region. To read the rest go here.

In Monday’s piece (5/17) we promised extended coverage of this spectacular event. Below are video interviews with recording artist / singer / musician Tracy Bonham, violinist Geoffrey Castle, and the shows creator and musician, Michael McMorrow. The Videos also contain performance footage shot at the front of the stage during the various performances.

In addition, below is a stunning photo slide show from a couple of the best concert photographers in the business, Jerry and Lois Levin from Jerry and Lois Photography. They don’t just take photos. They capture moments. To see more of their amazing work please go to www.jerryandlois.com. To see the videos and photo slide show go here

Not only is he a multi-media journalist, he is also an accomplished musician. He is the founder of SMI and drives the creative look, feel and branding for the publication. His years of writing, arranging, and performing live music in a variety of genres inform his ability to communicate the message and the mechanics of music. Roth’s work on SMI reflects his philosophy that music is the universal language, and builds community. He believes it has the power to unite people of every race, religion, gender, and persuasion.
Related ItemsExaminer.comHeartSynergia Northwest 2010
← Previous Story Original Members of Heart to reunite this month for Synergia Northwest 2010
Next Story → Synergia Northwest 2010: Howard Leese and Randy Hansen (Video)