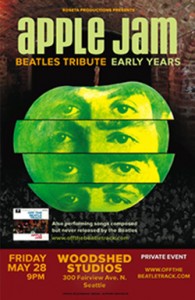 I had a blast covering the Apple Jam show this past Friday at Woodshed Studios in Seattle. The band was smokin’ and the folks in attendance were having a great time watching and listening to the band performing classic Beatles tunes from their first two records. I have to thank the bands manager for being such a great host and letting me have great access to the stage and the members of the band. For a full review of the show and to check out the video that features a snippet of “I Saw Her Standing There” plus some interviews with band members, go here.

Also, I will have extended coverage with more videos right here on seattlemusicinsider.com. I am looking forward to covering their next show as they perform Paul McCartney and Wings, “Band on the Run”  in it’s entirety at The Triple Door on July 24th.

Not only is he a multi-media journalist, he is also an accomplished musician. He is the founder of SMI and drives the creative look, feel and branding for the publication. His years of writing, arranging, and performing live music in a variety of genres inform his ability to communicate the message and the mechanics of music. Roth’s work on SMI reflects his philosophy that music is the universal language, and builds community. He believes it has the power to unite people of every race, religion, gender, and persuasion.
Related ItemsApple JamSMI RadioThe BeatlesWoodshed Studios
← Previous Story SMI Radio Interview: Beatles tribute band ‘Apple Jam’
Next Story → SMI Featured Artist of the Month (June): Geoffrey Castle Triple Door Show Review (SMI Radio interview & SMI TV video)