Home / Reviews / National / Global Artists / Rest in Peace Starchild…so glad I got to see you one more time.

Rest in Peace Starchild…so glad I got to see you one more time. 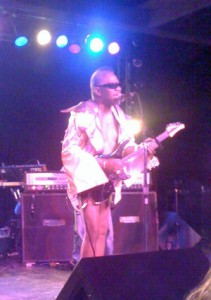 Some of you funk fans probably heard the news today that Starchild Garry Shider lost his battle with cancer and passed away at just shy of his 57th birthday. I am very fortunate that I did get to see him play one last time here in Seattle this past January 19th at the South Downtown Showbox. It was an amazing night as George Clinton and his great band featuring a few members of the original P-Funk did it to us in our ear holes. Shider was a big part of the P-Funk look and sound. I will miss seeing him up on stage wearing his trademark diaper and playing those tasty and funky licks that we have come to know and love. Parliament / Funkadelic has always been one of my favorite musical outfits and a huge influence on me as a musician myself.

Original P-Funk Guitarist vocalist and Rock n’ Roll Hall of Famer Garry “Diaper Man” AKA “Starchild” Shider passed away of cancer today (June 16th), a little over one month shy of what would have been the artist’s 57th birthday.

Shider was an original member of Parliment / Funkadelic and was recently seen on the 2010 P-Funk Tour.

During Parliament-Funkadelic performances Shider was known for appearing on stage in a diaper. This became one of the visual trademarks of the band and earned him the moniker of “Diaper Man.” Shider’s guitar and vocals are featured prominently in the hit songs like, “Cosmic Slop,” “Getting to Know You,” and “One Nation Under A Groove”. In addition, he co-wrote many popular Parliament-Funkadelic songs. Shider also made important contributions to P-Funk spin-off acts including Bootsy Collins and the late Eddie Hazel.

Shider has been featured in Guitar Player Magazine three times, and once in the Japanese version. He has been featured in Who’s Who in Music and appeared on a compilation album by Paul Shaffer of the David Letterman band,and also on rock group The Black Crowes 1996 album Three Snakes and One Charm. Shider has also appeared on Saturday Night Live several times, The Late Show with David Letterman, The Arsenio Hall Show, New York Undercover, The Tonight Show, and others.

We had the opportunity to see Shider and other original members of P-Funk, such as Michael “Kidd Funkadelic” Hampton, perform this past January 19th at the south downtown Showbox Theatre in Seattle.

The photo included in the article was shot with an i-Phone from the front of the stage. P-Funk put on a solid show that night. Shider was on top of his game, along with the rest of Clinton’s brilliant P-Funk musical family. It was an evening that we will soon not forget. P-Funk’s influence on local bands such as Eldridge Gravy and the Court Supreme  as well many other funk and R&B groups in and around the region cannot be denied. In fact, Joe Simpson AKA Eldridge Gravy. who fronts the group, was also in attendance for George Clinton and the P-Funk All Star’s last show in Seattle that would feature Shider.

Shider may have wore a diaper on stage but his guitar work and musical direction on stage was not mere childs play. He was a P-Funk mainstay and one of the last few original members still out touring with the P-Funk crew. We feel fortunate to have been able to see him play with the legendary funkmaster, George Clinton. Little did we know during the show that Shider would be playing in the Emerald City with Clinton and band for the last time.

Rest in peace Starchild. Here is hoping you and your former band mates are doing your thing with passion and joy in another funky dimension. We on earth trust that you will keep the universe safe from those that would try to bring harm to the mothership and it’s crew as it glides through time and space, bringing funk and love to the masses.

Shider is survived by his wife of 32 years, Linda and his children, Garrett and Marshall.

Not only is he a multi-media journalist, he is also an accomplished musician. He is the founder of SMI and drives the creative look, feel and branding for the publication. His years of writing, arranging, and performing live music in a variety of genres inform his ability to communicate the message and the mechanics of music. Roth’s work on SMI reflects his philosophy that music is the universal language, and builds community. He believes it has the power to unite people of every race, religion, gender, and persuasion.
Related ItemsBootsy CollinsExaminer.comFunkadelicGary ShiderP-FunkParliament
← Previous Story Synergia Northwest 2010: Howard Leese and Randy Hansen (Video)
Next Story → SMI Radio Ep. 16 On Demand: Bumbershoot Post Event Special