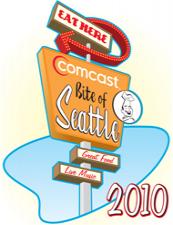 The sun came out all weekend and shined it’s light on over 150 acts that converged at the Seattle Center for the Comcast Bite of Seattle this past weekend. With summer sun and hot temperatures comes summer music festivals. There have been some great festivals already up and down the coast. It does not get much bigger and better than the Comcast Bite of Seattle. We were very fortunate to get turned on to some great new music from bands like Perry Acker, Jacob Merlin, and Keegan Smith.

It was great to see the return of Dan Reed (Dan Reed Network), who played a beautiful and haunting acoustic set to the delight of his fans. SMI also had the opportunity to chat with sax man Darren Motamedy, who always puts a smile on the crowds faces. These folks will definitely be future guests on SMI Radio. In the meantime, you can listen to this week’s episode below

For the most recent articles on examiner.com, click the links below…

Comcast Bite of Seattle: It was all about food, music and sunshine (photo slide show)

SMI Radio Episode 12 featuring one of the participants in the event, Sonic Funk Orchestra is now up. You can check out the show and download it below. For more information about this great band, go here.

Also on SMI Radio this week is our Bite of Seattle Special featuring music from some artists that have been guests on the show. In addition, we have a great interview with the festival’s entertainment director, Linda Zopfi. To read more about Linda and access articles from other “Bite Artists” go here.

Not only is he a multi-media journalist, he is also an accomplished musician. He is the founder of SMI and drives the creative look, feel and branding for the publication. His years of writing, arranging, and performing live music in a variety of genres inform his ability to communicate the message and the mechanics of music. Roth’s work on SMI reflects his philosophy that music is the universal language, and builds community. He believes it has the power to unite people of every race, religion, gender, and persuasion.
Related ItemsComcast Bite of SeattleFunkLinda ZopfiR&BSMI RadioSonic Funk OrchestraSoul
← Previous Story Happy Fourth of July to music lovers of all ages
Next Story → SMI Video Interview and other random & cool stuff…