SMI Radio Ep. 19 On Demand: Fitz and The Tantrums 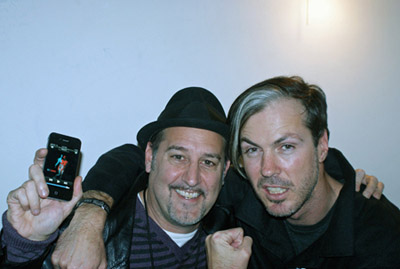 Fitz and Me backstage prior to his show at The Crocodile

The group made it’s way up to the coast last week to The Emerald City and put on an electrifying set at the world famous Crocodile Cafe. To read more about these guys and see a cool video, check out my newest article on Examiner.com:

Last week I  sat down with John Wicks and Fitz prior to their show at the Crocodile Cafe, Tuesday, November 9th. The group was in town to play some live shows and promote it’s news LP, “Pickin Up The Pieces.” from Dangerbird Records. The band is slowly building a huge national following based on the strength of their catchy single, “Money Grabber.” We talked about the bands influences, inspirations, creative process and their recent appearance on “Live From Darryl’s House.”

Not only is he a multi-media journalist, he is also an accomplished musician. He is the founder of SMI and drives the creative look, feel and branding for the publication. His years of writing, arranging, and performing live music in a variety of genres inform his ability to communicate the message and the mechanics of music. Roth’s work on SMI reflects his philosophy that music is the universal language, and builds community. He believes it has the power to unite people of every race, religion, gender, and persuasion.
Related ItemsFitz and The TantrumsKEXPKMTTKOMO News RadioPopSoulThe Crocodile Cafe
← Previous Story SMI Radio Ep. 18 On Demand: Wheedle’s Groove
Next Story → SMI Radio Ep. 20 On Demand: Cody Beebe & The Crooks