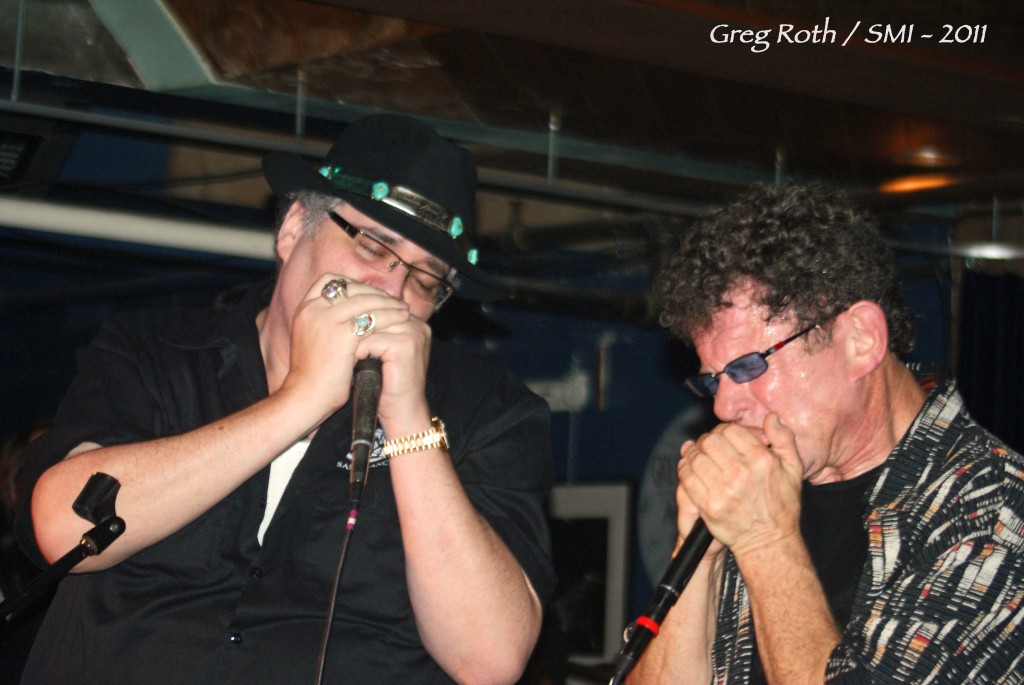 When I interviewed John Popper backstage at Synergia Northwest 2011 this past May, he had no idea that Harmonica legend, Lee Oskar lived up in the Pacific Northwest. Nor did he know about the Highway 99 Blues Club. John is on the road pretty much 10 months out of the year and when he is home, he does not want to venture out into the city and play, he just wants to be home. Can you blame him?

I met Lee Oskar for the first time last spring and told him that John wanted to meet him. Lee seemed very interested in meeting John and having him sit in with him when he plays Highway 99 Blues Club. Lee even good naturaly called John out during my interview with him on SMI Radio a few months back.

After the collective effort of several folks, including me, the two harmonica powerhouses finally had dinner recently and got up to play in front of a sold out show at Highway 99, this past Saturday night, October 22nd, 2011. I wanted to be there when these two forces of nature collided and I was. You can read more about it and see my photo slideshow on examiner.com by clicking the link below.

I interviewed both of them after the show. They will be my guests next week on SMI Radio on NWCZ  and Night Out Radio.

In the meantime, you can hear my past interviews and music from these artists by clicking on the player below or downloading to your mobile device.

Not only is he a multi-media journalist, he is also an accomplished musician. He is the founder of SMI and drives the creative look, feel and branding for the publication. His years of writing, arranging, and performing live music in a variety of genres inform his ability to communicate the message and the mechanics of music. Roth’s work on SMI reflects his philosophy that music is the universal language, and builds community. He believes it has the power to unite people of every race, religion, gender, and persuasion.
Related ItemsBlues TravelerJohn PopperLee OskarLive Seattle MusicLowrider BandNorthwest MusicWAR
← Previous Story New Stacy Jones Band CD drops November 1st
Next Story → SMI Radio Ep.39 On Demand: Danny Seraphine, Don Bennett and Quickie