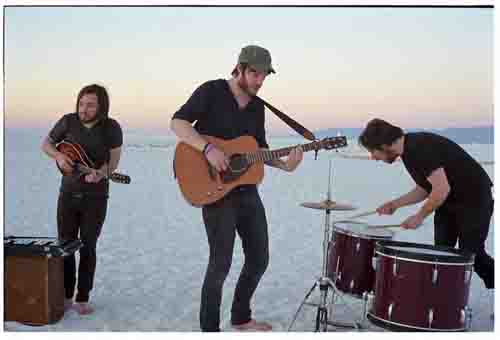 Ravenna Woods has received local and national attention because of a non-traditional approach to acoustic folk music. The three-piece outfit produces edgy and dark songs with haunting lyrical themes. The atmospheric harmonies soar above clean guitar tones and tasty, minimalistic yet complex arrangements. The band will embark on a West Coast Tour which kicks off in Portland  at Mississippi Studios on January 19th. They will be back up to The Emerald City for a show at the Comet Tavern on January 20th and then head back down the coast.

I spoke to guitarist and vocalist Chris Cunningham about the group, their music and their influences. In addition Chris talks about their partnership With Red Ryder Entertainment.

Check out the piece I wrote on them on examiner.com

Not only is he a multi-media journalist, he is also an accomplished musician. He is the founder of SMI and drives the creative look, feel and branding for the publication. His years of writing, arranging, and performing live music in a variety of genres inform his ability to communicate the message and the mechanics of music. Roth’s work on SMI reflects his philosophy that music is the universal language, and builds community. He believes it has the power to unite people of every race, religion, gender, and persuasion.
Related ItemsChris CunninghamNorthwest MusicRavenna WoodsSeattle Live MusicSeattle Music
← Previous Story SMI Radio Ep. 41 On Demand: Musical Tribute to Judy Roth, Barbara Davis Roth and Jan Arthur Roth
Next Story → SMI Radio Ep. 43 On Demand: Julia Massey & The 5 Finger Discount / Lucca Sacchetti (Rockstar Motel)