Here is your Sasquatch 2012 Lineup 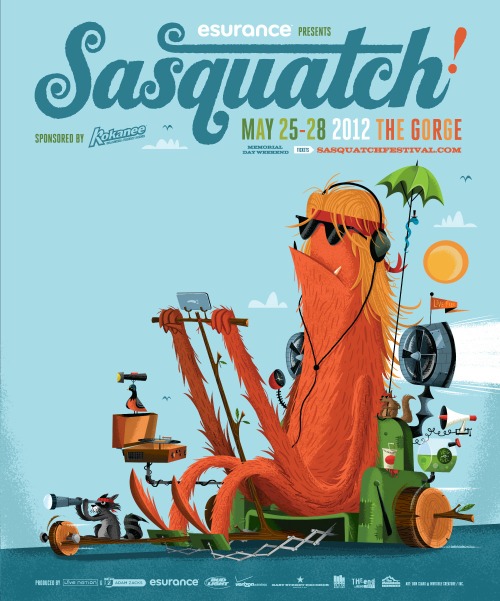 It looks like Sasquatch 2012 is offering a very robust lineup again this year the lovely Gorge Amphitheatre.

The Northwest festival as announced its 2012 lineup. The unveiling of the lineup came at Sasquatch’s launch party, which took place earlier tonight at Seattle’s Neptune Theater.

Some of the acts that will grace The Gorge stages this year are: Beck, Jack White, Spiritualized, Beirut, St. Vincent, Bon Iver, Girl Talk, Mogwai, Silversun Pickups, Feist, The Shins and Tenacious D.

Those and others artists will perform on five different stages: Sasquatch, Bigfoot, Banana Shack, Yeti and the Main Stage. You can access the complete lineup here.

The festival is scheduled to go down on Memorial Day Weekend (May 25th-28th) at the The Gorge in George, WA. Pre-sale kicks off next Wednesday, February 8th at 10AM PT via Live Nation.

Tickets go on sale to the general public next Saturday, February 11th also via Live Nation.

Not only is he a multi-media journalist, he is also an accomplished musician. He is the founder of SMI and drives the creative look, feel and branding for the publication. His years of writing, arranging, and performing live music in a variety of genres inform his ability to communicate the message and the mechanics of music. Roth’s work on SMI reflects his philosophy that music is the universal language, and builds community. He believes it has the power to unite people of every race, religion, gender, and persuasion.
Related ItemsSeattle Music HappeningsThe Gorge
← Previous Story Live Review: Jakalope at El Corazon 1/28
Next Story → Sasquatch 2012 artist Bon Iver performs on Saturday Night Live (Video)