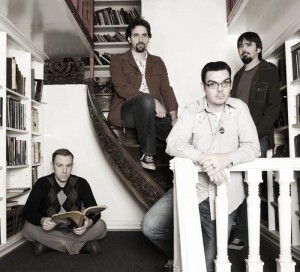 Those of us in the South Puget Sound have known about and enjoyed the Vile Red Falcons  for some time now. The band is no great secret. This outfit has been rocking the southend for about 5 years. It is now time for the rest of the region to get to know them.

The Vile Red Falcons are: John Beidel (vocals and guitar), James Bench (Bass Guitar), Kevin Kildun (drums) and Nate Rich (guitar). You can catch them playing around town spreading their sonic sound quite often. Such was the case on Friday, January 13th at The New Frontier in Tacoma where they unveiled their new CD “Under Your Skin” to a full house. The Falcon’s offered up a blistering night of their 90’s style grunge tunes to a receptive crowd who couldn’t get enough.

“Under Your Skin” is the second offering from this high powered in your face with gusto band. Their first CD was self-titled. The Falcons lean heavily on the “Seattle sound” from the grunge and independent scene that ruled our area during the 90’s. However, the Falcons have elevated that sound and brought up to date with an aggressive attitude. Screaming guitars, thundering bass and big heavy drums are what the Falcons are all about. Relying on Conrad Uno who has recorded many bands in the same vein such as Mudhoney, The Presidents of The United States, Supersuckers, Sonic Youth etc. to bring their sound out on this project is a move that has paid off in spades for the Falcons.

Ten tracks are what you get on “Under Your Skin” and the beauty to this writer is that while the Falcons definitely have an instantly recognizable sound each song stands on it’s own and don’t blend together which would be easy an easy trap to fall into. Lead singer John Beidel sings with conviction, emotion and determination.

The group’s lead vocalist and front man is an artist with something to say and wants you to hear about it. “Touch”, the first track on the CD starts off with a sonic punch in the face. “Touch” invites you right into their world of soaring guitars, groovy breaks and a bass line that you have to nod too.

The guitar work on this CD is deep with hard-hitting riffs and catchy hooks. The Falcons also have a softer reflective side that works just as well.  “Devil Send” and “Double Fault”, demonstrate that this band has depth as well as a wall of guitar sound. “Double Fault” draws you immediately into the heartache of a relationship gone wrong and the process of trying to get your feet back under you. The honesty and grace of the lyrics are complemented by a bluesy and almost southern rock sound dished out by the seasoned band.

Each member having played in other bands for ten years or so has solidified and honed their playing skills. This CD shows it. I have seen the Falcon’s struggle and grow over the years. Putting out their first CD almost broke the band up. But time has been on their side and one can tell this was the CD they have been yearning to share with everyone.

The Falcons cite The Black Crowes, The Melvins, Soundgarden and Drive By Truckers as some band they enjoy and draw inspiration from. You won’t have to look too hard to find these bands represented in the Falcon’s songs. But, don’t let that be your guide in determining whether or not you take a listen to these guys. The Falcons have taken those influences and put their own stamp on it, embracing the sound that they love and owning it.

Vile Red Falcons certainly do spread their wings on their latest music offering. You can fly down and pick up “Under Your Skin” at many independent record stores around town and off their website (.http://www.vileredfalcons.com/).

Better yet… do yourself a huge favor and head out to one of their shows. Experience their raw power, emotion and musical prowess for yourself and pick up a copy after the show. Their live show is exactly what you would want out of a band with their grungy, distortion-laden sound. Flannel shirt is not required but no one will mind if you dig it out and wear for old times sake.

Not only is he a multi-media journalist, he is also an accomplished musician. He is the founder of SMI and drives the creative look, feel and branding for the publication. His years of writing, arranging, and performing live music in a variety of genres inform his ability to communicate the message and the mechanics of music. Roth’s work on SMI reflects his philosophy that music is the universal language, and builds community. He believes it has the power to unite people of every race, religion, gender, and persuasion.
Related ItemsDarell FortuneLocal MusicNew Music ReviewSouth Sound MusicVile Red Falcons
← Previous Story SMI Radio Ep. 50 On Demand: Roger Fisher / Jeremy Westfall (Northwest LoveFest)
Next Story → Fake Label Records Presents: PCNW Music Compilation