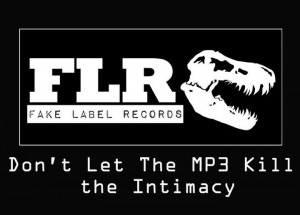 SMI featured contributor TImmy Held from Tyrannosaurus Grace is not only a talented writer and music artist, he is somewhat of a local record mogul. Ok… mogul may not be the pushing it a bit but he is very passionate about shining the spotlight on Pacific Northwest music artists. He and his partner Justin Foss put together Fake Label Records.

FLR was established in 2011 by Held and Foss. The small label operates a shoestring budget who aims to use all of it’s available resources as well as a DIY approach to getting things done in a thrifty fashion to boost the profiles of independent and DIY acts from the Pacific Northwest.

Their first offcial release was made available in September of 2011 and our first compilation album of Northwest Artists will be available in early 2012.

FLR is getting ready to put out another disc with your help via Kickstarter.com. They have asked some of our favorite bands to contribute songs to a compilation CD that will be FREE! Their hope is to that each band on the compilation album will share it with their fans.

To find out more about this great project check out the below video.

Not only is he a multi-media journalist, he is also an accomplished musician. He is the founder of SMI and drives the creative look, feel and branding for the publication. His years of writing, arranging, and performing live music in a variety of genres inform his ability to communicate the message and the mechanics of music. Roth’s work on SMI reflects his philosophy that music is the universal language, and builds community. He believes it has the power to unite people of every race, religion, gender, and persuasion.
Related ItemsFake Label RecordsNorthwest MusicSeattle Music Happeningstimmy held
← Previous Story New Music Review: Vile Red Falcons spread their wings
Next Story → Seattle Musicians Rock President Obama