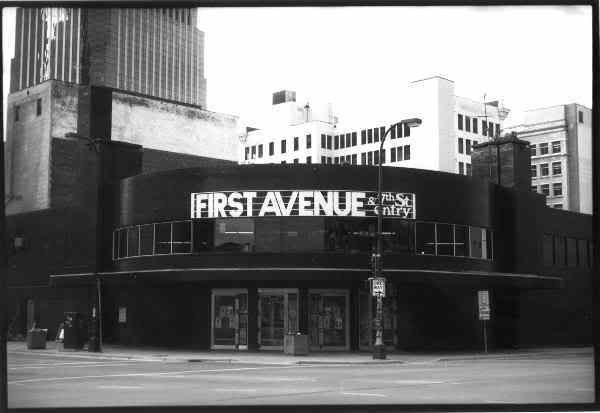 The venue that Prince helped put on the musical map

It’s a beautiful day here in downtown Minneapolis. We are staying at the beautiful Graves 601 Hotel,  right across the street from the Target Center – and spitting distance from the world famous First Avenue.

It’s the club that Prince helped make famous with legendary and stunning live performances. It’s also the sound-stage and backdrop for the movie, Purple Rain.

We’re in town to see our friend and keyboardist Matt “Doctor” Fink do his thing with The Purple One’s band, The Revolution. This multi-cultural and multi-gender outfit consisting of Dr. Fink, Bobby Z. on drums, Brown Mark on bass, Lisa Coleman on keys, Dez Dickerson on guitar – later joined by Wendy Melvoin on guitar – provided Prince with a solid live sound and visual presence.

The band is reuniting this Sunday night, February 19th, for a special show at First Avenue. This will reunite The Revolution for the first time since 2003. Will His Royal Badness show up? It is anyone’s guess, but he’s given this reunion his blessing. Either way, it’s going to be a great night of music at a world famous venue for a noble cause. 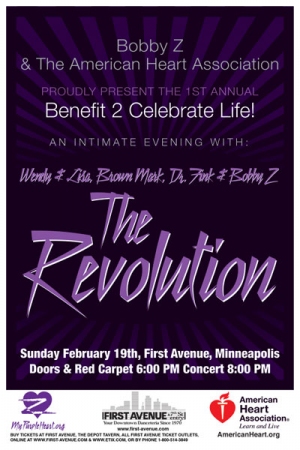 Bobby Z, best known as a drummer for Prince & The Revolution, was in critical condition after three blocked arteries caused a heart attack in February 2011. Doctors were able to open his blockages with three stents, which has allowed Z to make a full recovery. “Life is completely different now,” Z said. “Every moment has a new appreciation. I am still overwhelmed by all the thoughts and prayers I received from all over the world. This concert is for the fans. I am so honored and thrilled that The Revolution will join me in this celebration of my recovery. This will be an intimate show with music and stories.” Wendy and Lisa added, “Our hearts were broken when we heard that our dear friend, and band-mate Bobby Z had had a heart attack. He was the heart, the pulse, the beat of our band. We can’t wait to share the stage as one again, and help others in a fight against broken hearts caused by heart disease. The beat goes on!”

The Revolution was featured in the Grammy and Academy Award-winning score from the iconic film Purple Rain. Bobby Z performed with Prince for 10 years. “I want to personally thank Prince for his emotional support for me and my family during a very difficult time. That has meant a lot to me,” added Z. A portion of the proceeds will benefit Z’s MyPurpleHeart.org for continued heart-health education, and the American Heart Association. Z is also a featured speaker, sharing his story, at the American Heart Association’s annual Twin Cities “Heart & Stroke Gala” on December 10, 2011, at The Depot in Minneapolis.

You can hear my interview with Matt “Doctor” Fink for SMI Radio.

I spoke to Doctor Fink about the reunion show, working with Prince the movie Purple Rain, the various projects he’s involved with, and a lot more. If you’re a fan of Prince and The Revolution, you have to hear this!

Not only is he a multi-media journalist, he is also an accomplished musician. He is the founder of SMI and drives the creative look, feel and branding for the publication. His years of writing, arranging, and performing live music in a variety of genres inform his ability to communicate the message and the mechanics of music. Roth’s work on SMI reflects his philosophy that music is the universal language, and builds community. He believes it has the power to unite people of every race, religion, gender, and persuasion.
Related ItemsDr. FinkFirst AvenuePrince and The RevolutionSMI Radio
← Previous Story Sounds Major: My on and off relationship with Harvey Danger
Next Story → Talkin’ bout the Revolution…