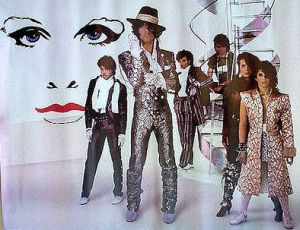 Tonight’s the big night for Prince and The Revolution fans in the Twin Cities. The line up features keyboardist Matt “Doctor” Fink, Bobby Z. on drums, Brown Mark on bass, Lisa Coleman on keys, Dez Dickerson and Wendy Melvoin on guitar and sax man Eric Leeds.

As mentioned in my previous article, the show will benefit the American Heart Association. The band hits the stage at 8:00 at the world renowned First Avenue, right in the heart of downtown Minneapolis.

I stood outside the club earlier today and listened to the group during sound check. I’m hear to tell ya that the band sounds absolutely fantastic! Based on what I heard, fans will be treated to classic Prince numbers like “Baby I’m a Star,” “Controversy,” “1999,” “Let’s Go Crazy” and “Partyup.”

Of course we flew in from Seattle, but we’re not the only ones from out of town. Fans made the pilgrimage from  Washington DC, Austin, Texas, Barcelona, Spain, Ireland and the UK.

Last night was a surreal experience, as we attended the glamorous pre-concert party at Seven Sushi Ultralounge and Skybar. Bobby Z. was there, to the wild delight of the crowd.  I met and chatted with original Prince guitarist Dez Dickerson, and Doctor Fink, among other luminaries.

classics were blasting while a compilation video featuring  different eras of The Revolution played and people danced, laughed, and drank purple martinis.

After tonight’s show, Questlove from The Roots will be hosting the after-party and playing DJ. The big question is… will Prince show up? According to Twincities.com, The Purple One broke bread last week with former band mate Bobby Z. Bobby had this to say, “We welcome him with open arms. I mean, anything’s possible in his world, and the fact that he’s been so supportive….Let me put it this way: ‘Purple Rain’ is his house, we’re just housesitting. At the end of the day, if we don’t get Prince and the Revolution, at least we’ll get the Revolution.”

Either way, it’s definitely going to be a spectacular show. With a band this good in a brilliant setting, there’s no doubt the audience will leave satisfied. Tonight will be a purple night to for the ages.

I spoke to Doctor Fink about the reunion show, working with Prince the movie Purple Rain, the various projects he’s involved with, and a lot more. If you’re a fan of Prince and The Revolution, you have to hear this!

Not only is he a multi-media journalist, he is also an accomplished musician. He is the founder of SMI and drives the creative look, feel and branding for the publication. His years of writing, arranging, and performing live music in a variety of genres inform his ability to communicate the message and the mechanics of music. Roth’s work on SMI reflects his philosophy that music is the universal language, and builds community. He believes it has the power to unite people of every race, religion, gender, and persuasion.
Related ItemsDoctor FinkFirst AvenueNewsPrince and The RevolutionSMI Radio
← Previous Story SMI visits Twin Cities to see The Revolution
Next Story → Live Review: Celebrating Presidents Day the right way with POTUSA