Live Review: The Darkness lights up The Neptune 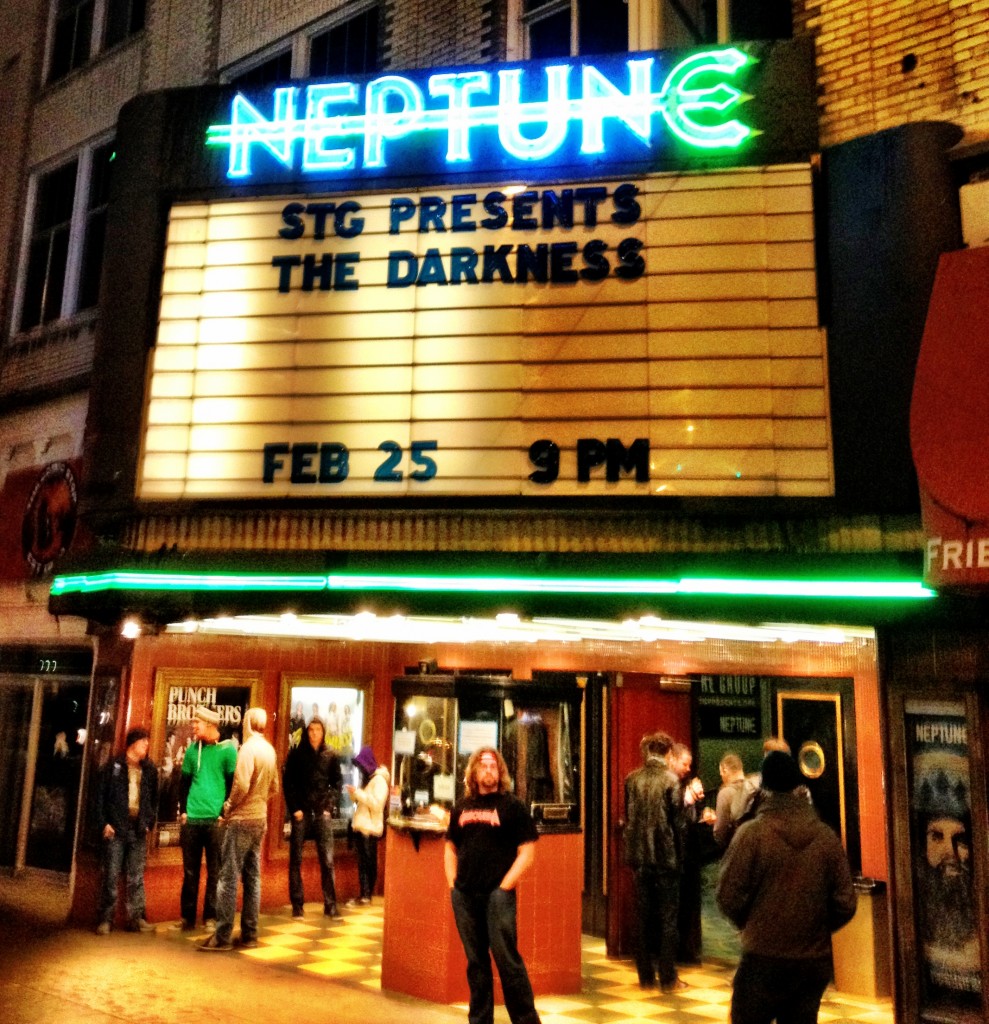 Most of my favorite bands I’ve been able to see at a club or festival, but one that’s eluded me for years is The Darkness.  I had a near miss in Hollywood in 2004, when they were playing just down the street from my apartment.  But when I got to the box office, they said the show sold out less than 20 minutes before.  I was pretty bummed, but figured I would just catch them next time around.  Little did I know “next time around” wouldn’t be for another 8 years.

Shortly after that tour, the band broke up, due to front man Justin Hawkins’s drug use.  Fans were crushed, and I was afraid I wouldn’t have a chance to see them again – at least with the original lineup.  So when I heard The Darkness was back together and playing The Neptune on Feb. 25th, I was beyond ecstatic.

The Neptune Theatre, in Seattle’s University District, started as a movie theater in 1921.  Now, it is transformed into a beautiful multi-media performance venue – laden with ornate moulding, gold painted Neptune heads, stained glass windows, and a spacious bar. Smaller than The Moore, but larger than Neumos, it seats close to 900.

Opening the show was The Crown Jewel Defense.  Their look was more or less in line with the glam rock vibe of the night, with the band members sporting tight pants and eyeliner.  In spite of some issues with the PA, the band was tight, with great energy onstage.  Each tune earned roaring applause.

As incredible as Foxy’s set was, the moment The Darkness took the stage was pure magic.  They tore into the classic “Black Shuck” from their first album, Permission to Land – and the crowd erupted.  I had been waiting 8 years for this, and it was every bit as good as I hoped.  The band was rocking their signature garb; Justin in ridiculously tight pants and no shirt; Dan in a vintage coat, which he later shed to reveal a Thin Lizzy shirt (he wears it at every show); Ed in all black; and Frankie looking like a white Jimi Hendrix, with a bandanna wrapped around his head just below his Afro.  As the show progressed, Justin went through several costume changes, eventually donning a number of different unitards.

This was their last show of the tour, and they sounded tight as hell.  Every song had a solid groove, not a single note of the innumerable solos was missed, and Justin nailed every second of his unparalleled wailing falsetto vocals.  They played for what felt like two solid hours, running through the best material off their first two albums (‘Permission to Land” and “One Way Ticket to Hell… and Back”), plus a few numbers from their new album, due out this summer.  They even played a couple of my favorites that I didn’t expect to hear, such as “Girl With The Hazel Eyes,” and “Giving Up.”  (The only song I wished they had played, but didn’t, was “Girlfriend,” off the second album.)

Not only was the set incredible, it was an intense, high-energy show.  Justin was the king of the stage, performing solos atop the kick drum, and then finishing by leaping off and performing air splits that would rival those of David Lee Roth.  Much like Foxy’s Eric Nally, Justin bounded across the stage with reckless abandon, always seeming to ride the edge of disaster, but coming out unscathed.

In the middle of songs, he would drop his pick and heel-kick it back up to catch it like a hackey sack, never missing once. The most exciting part was when he got on top of a roadie’s shoulders and came through the audience with his guitar – still soloing – without missing a beat, only stopping for a quick high five or to grab someone’s cell phone and snap a picture of himself.  It was beyond belief.

They finished the night out with an extended version of  “Love On The Rocks,” when Eric Nally joined them for an audience call-and-response bit.  As the music fully kicked back in, Nally leaped from the stage into the middle of the mass of sweaty, satisfied rock fans.

Yeah.  It was awesome!

*********
Editor’s note:  Check out the free download of “Nothing’s Gonna Stop Us” on their website, www.theactualdarkness.com.
— Jennifer Austin 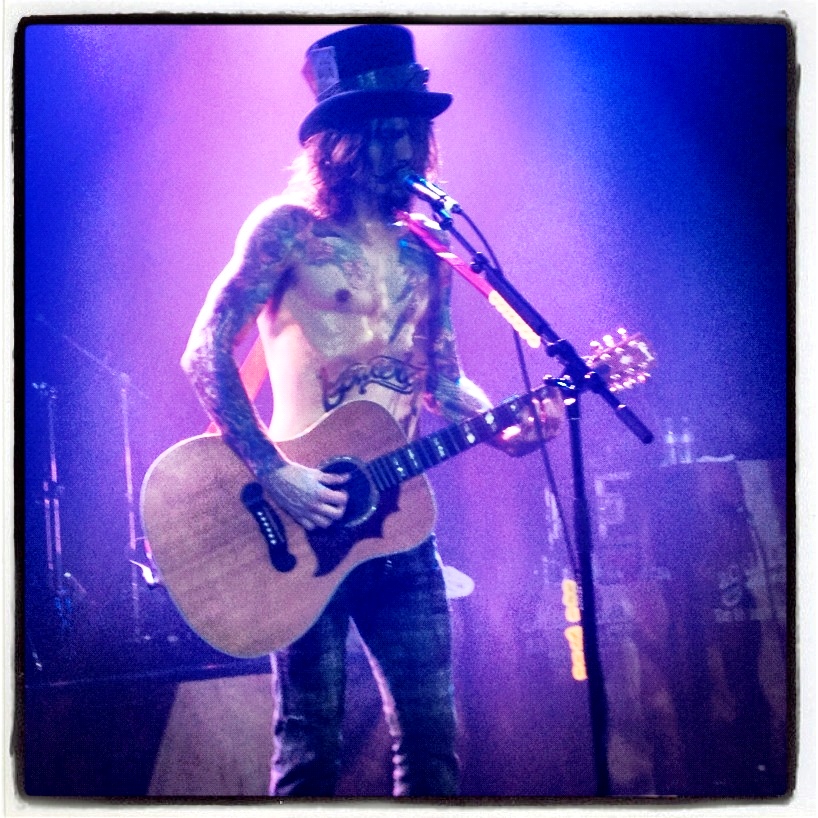 Not only is he a multi-media journalist, he is also an accomplished musician. He is the founder of SMI and drives the creative look, feel and branding for the publication. His years of writing, arranging, and performing live music in a variety of genres inform his ability to communicate the message and the mechanics of music. Roth’s work on SMI reflects his philosophy that music is the universal language, and builds community. He believes it has the power to unite people of every race, religion, gender, and persuasion.
Related ItemsFoxy ShazamJustin FossSeattle ConcertsSeattle Music HappeningsThe DarknessThe Neptune
← Previous Story Reggae legend Bob Marley documentary to hit silver screen (Video Trailer)
Next Story → Live Review: Glen Campbell says goodbye in grand fashion