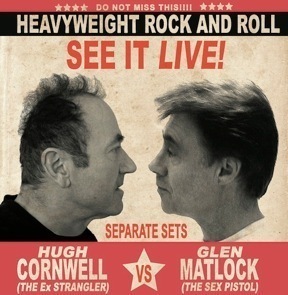 Think Punk Rock is dead? Well, think again. The one-two punch served up by former Punk greats Hugh Cornwell and Glen Matlock at El Corazon on Saturday (3/10) was a reminder to us all that you’re never too old to rock.

Hugh Cornwell, the longtime front man for The Stranglers, has been out on his own for a while.  So has Glen Matlock, a one-time member of the Sex Pistols,  The Rich Kids and The Faces. Billed as a “Heavyweight Rock and Roll” bout, it also served as a reminder of where much of today’s music got its start. With a combined age of 117, these two men still have amazing guitar, vocal, and stage skills!

Playing separate sets, both Cornwell and Matlock used the same rhythm section, giving the audience a feast for their eyes and ears.  Drummer Clem Burke (Blondie) and bassist Steve “Fish” Fishman offered up their technically brilliant skills, adding depth and beats that kept everyone moving.

Matlock hit the stage first with enthusiasm and a blistering straight-ahead punk set. Getting the crowd singing along early with “God Save The Queen” and “Pretty Vacant” (which he had a big part in creating for the Sex Pistols), Matlock worked the stage and audience masterfully. Flipping the crowd off a few times and striking an occasional pose – it was obvious he was having a good time. “Idiot,” which he described as being about himself, was a crowd pleaser. Matlock also gave an unspoken tribute to the late Davy Jones, by doing “(I’m Not Your) Stepping Stone,” a song covered by both the Monkeys and Sex Pistols.  With little banter between songs and choosing to let his music speak for itself, Matlock sang and played with authority and experience.

Former front man for The Stranglers, Hugh Cornwell, headlined the night.  The Stranglers had nearly two dozen top 40 hits in the U.K., but were mostly a cult band here in the U.S. Cornwell is – plain and simple – a great guitar player and song writer!  Cornwell was in stellar form, pleasing the crowd with such classics like “Hanging Around” and “Nice ‘n Sleazy,” as well as a lot of new songs. Clem Burke and Steve Fishman were really able to showcase their wealth of skills during this part of the night. Punk rock is not really known for it’s guitar solos, but Cornwell showcased his skills with well-timed song breaks to wow the crowd. “Stuck In Daily Mail Land” was a scathing indictment of the British newspapers, which was very relatable.  Cornwell remarked on how it rains every time he comes to Seattle, and asked if we couldn’t call President Obama to do something about it.  We totally feel you, Hugh!

Having witnessed and identified with the  ‘punk movement” that swept the mid-70s to early 80s, it’s tough to admit we’re all getting older – and that our youthful heroes of angst and rebellion are, too. Although there were a couple of spiked and colored hairs in the crowd, the majority of the audience just looked like average citizens. (Probably because now we are.)  But, with this show, we were able to go back to our roots and remember when punk songs had real meaning and heart. It was a great show by two punk masters who are masterful talents with backing musicians to match.

Not only is he a multi-media journalist, he is also an accomplished musician. He is the founder of SMI and drives the creative look, feel and branding for the publication. His years of writing, arranging, and performing live music in a variety of genres inform his ability to communicate the message and the mechanics of music. Roth’s work on SMI reflects his philosophy that music is the universal language, and builds community. He believes it has the power to unite people of every race, religion, gender, and persuasion.
Related ItemsEl CorazonGlen MatlockHugh CornwellLive ReviewsSeattle Music HappeningsThe Sex PistolsThe Stranglers
← Previous Story Artists tell Rush to knock it off
Next Story → Exclusive live Queensryche track with Synergia Northwest Orchestra