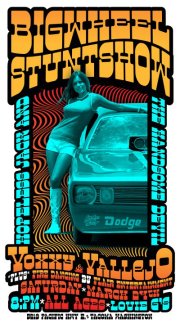 Did you feel the ground shaking? It wasn’t an earthquake, but it did come from a northwest source! The epicenter of the sound quake came from Fife, in one of the best venues you’ll ever visit anywhere. Louie G’s hosted a night with Voxxy Vallejo, Hopeless Jack and The Handsome Devil, and Big Wheel Stunt Show Saturday night, March 24th. All three bands rocked the crowd with their own brands of rock and roll, and each band was accompanied by fire dancers, courtesy of Flair Entertainment. It was a spectacle of sound and sight in every way!

Voxxy Vallejo hit the stage first and got the crowd going with their blend of bluesy, funky, old-school rock and roll. Lead singer Voxxy was in great form vocally and mesmerized the crowd. Voxxy is a beauty to behold. Channeling part rock-goddess with a little Janis Joplin thrown in, she loves what she does and it shows. With a powerful voice, hair flying in all directions, grooving to the funky bass line and amazing guitar played by Gene Vallejo, Voxxy is a show unto herself. But, she does it with the solid band that surrounds her. Gene Vallejo is a tremendous guitar player with versatility to match his skill.  Whether sitting in a chair rolling out slide licks, or straight-up wailing on it, Gene makes you feel every single note.

The fire dancers made their first appearance of the night during the Voxxy Vallejo set, and it really added to the show. The two ladies dancing to the music, swinging pots of fire from chains, were mesmerizing. 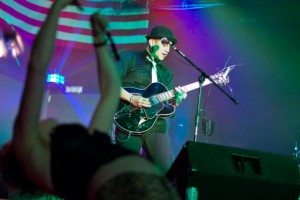 Hailing from Portland, Hopeless Jack and The Handsome Devil hit the stage next. Although they’re only a two-piece outfit —  Jack on guitar and The Handsome Devil (Smilin Pete) on drums — they rocked the place with astoundingly full sound and swagger. Their trademark is adding an early Social Distortion-esque element to their soul and blues roots.

These two are showmen with punchy lyrics, lots of energy, and an undeniable rawness. Jack moved about the stage like a possessed panther, writhing with angst – captivating the audience with his charisma. Jumping up on the drums at one point and delivering a blistering guitar solo, it was obvious these guys were having a great time. This was absolutely first-quality low-down-and-dirty roots rock! 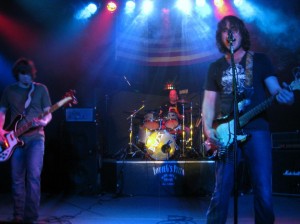 Closing out the bill was the always hard-rocking, thunderous Big Wheel Stunt Show. If you haven’t seen this band yet, move them to the top of your “must see” list immediately! Storming the northwest by way of Tacoma, Big Wheel is what rock is all about! This three-piece unleashes thundering drums and unbelievable bass lines, along with some of the best guitar you’ve heard in a long, long time. Evan Nagle has to be considered one of the best guitarist/frontmen on the scene. Not only is he jaw-droppingly good, he’s fun to watch. Think Pete Townsend, Jimi Hendrix, or any other guitar great — he channels them all.

BWSS played some of the better-known tracks from their two albums – but they mixed it up with some new tunes as well. Justin Gimse on drums and Jake Melius on bass provided the solid beat that guitarist Nagle needed to storm the crowd with his trademark solos and wild stage antics. It was thrilling to see, as he thrashed and contorted his body along with every note – and exciting to witness the technical prowess of the band. They’re musically solid. They’re fun to watch. They’re the embodiment of rock and roll!

This was an exceptional show, featuring just a taste of the talent we have rocking the south sound, in a venue that’s definitely worth the trip. If you pay attention to the local live music scene at all, you’ve heard about Louie G’s – but trust, it’s even better than what you heard! Louie G’s has the best stage, lighting, sound, and staff around – and he’s one of the nicest guys in the business. He has a place that any band or music fan will enjoy with awesome food, easy parking, and an all-ages venue.  Get down there!

Not only is he a multi-media journalist, he is also an accomplished musician. He is the founder of SMI and drives the creative look, feel and branding for the publication. His years of writing, arranging, and performing live music in a variety of genres inform his ability to communicate the message and the mechanics of music. Roth’s work on SMI reflects his philosophy that music is the universal language, and builds community. He believes it has the power to unite people of every race, religion, gender, and persuasion.
Related ItemsBig Wheel SuntshowDarrell FortuneHopeless Jack and The Handsome DevilLive ReviewsNewsSeattle Music HappeningsVoxxy Vallejo
← Previous Story Live Review: The 1 Uppers notch it up at The Royal Room
Next Story → Live Review: Narrows bring loud intensity to the Comet Tavern