By Dusty Henry on April 6, 2012@MrDustyHenry 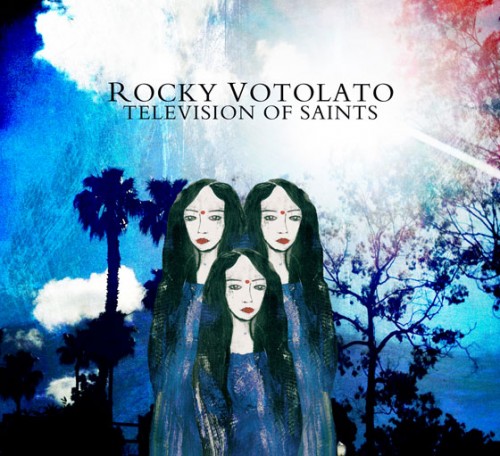 Rocky Votolato’s music is hard to criticize. No matter what criticism can be conjured up, he just seems so earnest and charming in his music. This is what might make his latest album Television of Saints, which came out April 3, such a challenge. This is definitely not a surface level album.

As of late, groups like The Head and the Heart have grabbed their audience with foot stomps, large harmonies, and nostalgic, emotive lyrics. However, at their root, the lyrics are a shallow “working man’s blues” – which is silly considering they’re living in the ever-so-metropolitan Seattle.

Television of Saints may not be as musically interesting as these grandiose bands, but it might have more to offer in the long run. On first listen, it can be very boring. There are no grabbing hooks or bright piano lines or pulsing drums. It’s a peaceful drone of finger picking and light strums with the occasional clean electric guitar and harmonica. For such a consistent career, there has to be something there worthwhile in there, and there is: lyrics.

Votolato’s lyrical strength lies in writing what he knows, instead of making up a story about living on a farm or thinking about the good ol’ days of working in a coal mine.

On “Start Over,” Votolato starts off a narrative about trying to understand some documents, presumably some sort of bills, and the tensions on his marriage arising from it. He comes to the conclusion that giving up is not an option and prompts that they just try to start over. The topic is simple and a bit trite for the genre, but Votolato approaches it delicately, with simplicity.

The ending track “Crooked Arrows” stands out as the strongest on the album. The melody of the chorus seems like it will come to an obvious conclusion, but Votolato takes unexpected turns with dissonant notes, giving a sense of mystery and uncertainty to his words. “Doubt is a bastard child, boy, of your ignorance and your arrogance,” he sighs. Finally, he settles with the heartbreaker “it’s a funeral for every sorrow that we’ve ever known.”

Television of Saints is more of a discipline than a conventional album.

If you’re not paying attention to the content, you’ll miss the profound nature of the text and hear just another singer-songwriter album among the thousands that already exist.

This might be a good reminder for Seattle songwriters and audiences: lyrics matter, so think about what the songs say.

Dusty Henry got his first bite of the local music scene at a Schoolyard Heroes show in Bremerton, Wash. and has been craving it ever since. He graduated from Seattle Pacific University in 2012 with a degree in Journalism. He has written for CityArts Magazine, KEXP.ORG, SSG Music, Ballard News-Tribune, Queen Anne and Magnolia News, and more. He’s an avid record collector so if you see him digging through record bins (most often Sonic Boom in Ballard) feel free to say hello! Dusty also manages the local music blog PreAmp where he writes about smaller local acts and provides resources for bands as they continue to grow.
Related ItemsDusty HenryNew Music ReviewsNewsRocky VotolatoSeattle Music Happenings
← Previous Story SMI Radio Ep. 56 On Demand: Philana and SMI Contributor Mikhael Mei Williams (AEG Live NW)
Next Story → Nothing Fake about ‘Fake it Or Leave it’ NW music compilation