Panama Gold photos from the Crocodile on: 4/6/12 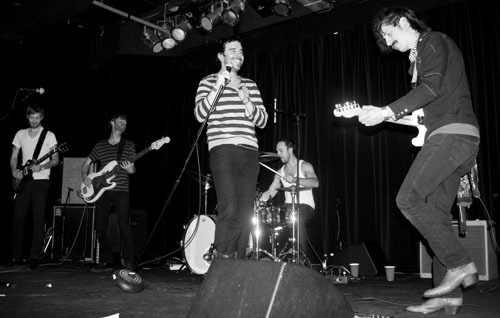 Seattle’s Panama Gold opened for Dirty Ghosts at The Crocodile Friday night, March 6, Their indie rhythm rock band entertain the few folks that did come to see them up out of their seats to dance. Below are photos from this past Saturday night’s show.

Panama Gold formed in 2009 and has undergone a few artistic changes over the past few months to bring a new feel and new material to the scene. The five-piece project includes Damien Goyenechea on vocals, Jeremy Archer on bass, Nick Werts and Robbie Luna both on guitar, and Brian Coyne on drums.

The band is working on a new EP set to release early this summer and is gearing up for a two-week Northwest tour this June. “We just want to keep playing live. That’s what we have the most fun doing,” Goyenechea said. “We just want to make music.”

Even though it was a little hard to judge the vibe based on the smaller crowd at the venue, Goyenechea said he enjoyed himself on stage and was grateful to have access to such a great PA system as well as the opportunity to play with Dirty Ghosts and Branden Daniel and the Chics.

Goyenechea made it clear that Panama Gold is a tight group and the members are willing to do whatever it takes to achieve their dream of getting on the road and staying on the road. He said the band takes what they do very seriously and have dedicated a lot of time to the group, dropping other projects and making sacrifices in general.

Not only is he a multi-media journalist, he is also an accomplished musician. He is the founder of SMI and drives the creative look, feel and branding for the publication. His years of writing, arranging, and performing live music in a variety of genres inform his ability to communicate the message and the mechanics of music. Roth’s work on SMI reflects his philosophy that music is the universal language, and builds community. He believes it has the power to unite people of every race, religion, gender, and persuasion.
Related ItemsAlina ShaninPanama GoldSeattle Music HappeningsThe Crocodile
← Previous Story Nothing Fake about ‘Fake it Or Leave it’ NW music compilation
Next Story → Video of the Week: “Baptized in Muddy Waters” Ayron Jones and The Way