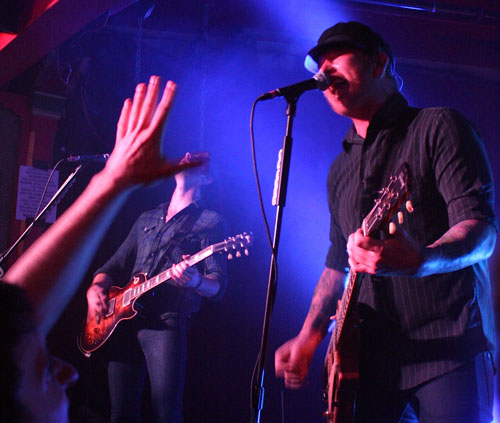 By Alina Shanin with additional contribution from Jennifer Austin

It was a good sign – Chop Suey was packed and pumped in anticipation of Go Radio.  Opening bands There for Tomorrow, Tyler Carter, and Simple As Surgery did a great job riling up the crowd with alternative pop rock, getting people moving and singing along.

Once on stage, Go Radio immediately grabbed everyone’s attention with a siren and flashing red and white lights – which alternated and evolved throughout the set, enhancing the mood of every song.

Vocalist Jason Lancaster got the audience and his bandmates to lip-synch along while rocking on the guitar and interacting with the floor. His vocal style definitely added pop flavor to the otherwise loud and somewhat heavy rock riffs and beats of Alex Reed (guitarist), Matt Poulos (bassist), and Steve Kopacz (drummer).

After a few upbeat songs, Reed and Lancaster slowed it down with a tune featuring their guitars and Lancaster’s vocals. ‘Why I’m Home’ followed the short duo performance, where Lancaster got a chance to show what he’s capable of on keys, and fans got to prove their loyalty by singing along for most of the song. Once the intimate moment was over, Go Radio brought the energy up and included a much heavier rendition of Adele’s ‘Rolling in the Deep.’

As the night went on, younger fans peeled off, leaving true Go Radio enthusiasts to take over and even start a mosh pit in the middle of the dancing crowd. The band and audience shared tons of energy, with the audience rocking and clapping on cue.

The sound quality and dramatic lighting were impressive – some of the best seen at Chop Suey – and definitely added to the excitement. With Go Radio being so tight, their songs practiced and perfected,  the familiar riffs were even more thrilling to hear live.

The Florida natives are just about halfway through their two-month tour and are heading south, so if you’re into infectious energy and a good time, make sure to catch Go Radio!

Not only is he a multi-media journalist, he is also an accomplished musician. He is the founder of SMI and drives the creative look, feel and branding for the publication. His years of writing, arranging, and performing live music in a variety of genres inform his ability to communicate the message and the mechanics of music. Roth’s work on SMI reflects his philosophy that music is the universal language, and builds community. He believes it has the power to unite people of every race, religion, gender, and persuasion.
Related ItemsAlina ShaninChop SueyGo RadioLive ReviewsSeattle Music Happenings
← Previous Story Vicci Martinez drops new tracks on iTunes
Next Story → Live Review: Storm Large reigns at The Neptune