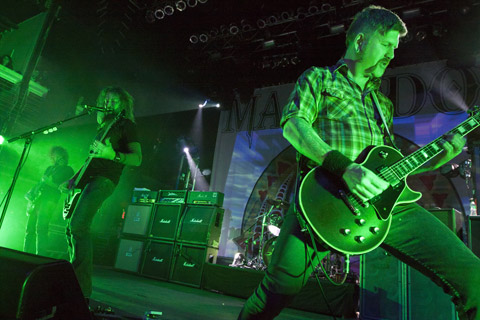 Metal fiends got theirs Monday night at the Showbox SoDo with Ghost, Mastodon, and the long-awaited Opeth. The Heritage Hunter tour brought the Swedish death metal band to Seattle for the first time to share their new melodic riffs, as well as bring back some early hits that spread the addiction that is Opeth throughout the world.

The opening band, Ghost, entertained not only with their doomy lyrics and heavy, yet upbeat music, but with their identity-concealing costumes. The mysterious singer’s face was made up in the famous black and white skull makeup, complete with headgear resembling the pope’s mitre, and a full-length robe with intricate designs. The rest of the band was covered in cloaks, hiding their faces under dark masks. While the music was fun to hear with lyrics a bit on the over-the-top ridiculous, devil-worshiping side, the set was short and many didn’t get inside in time to see them.

Throughout the night, the crowd’s attitude was a bit indecisive, shifting from high points of dancing and moshing to a few low points resembling boredom and involving some heckling. Once Mastodon was on stage, the audience got it together for a few minutes and rocked out to the always loud and always high-energy band. New songs from ‘The Hunter’ got a decent response, but none equaled that of Blood and Thunder, a popular favorite and their set-closer.

Opeth opened with a couple of faster songs to rile up the audience, but quickly switched to the new album, ‘Heritage,’ which showcases the group’s more musical – and at times, slightly jazzy – side of metal. Although the songs were still heavy, most had mellower moments, highlighting the talents of lead singer/guitarist Mikael Åkerfeldt, whose influences of Black Sabbath and Led Zeppelin were obvious in the precise and musical solos.

Even thought this new evolution of Opeth is much more relaxed and detail-oriented (which made it a bit difficult for the audience to mosh) it was actually enjoyable and showed the complexity of each musician. Bassist Martin Mendez and second guitarist/vocalist Fredrik Åkesson played a few impressive solos and got a few diehards to crowd-surf for a closer look. Drummer Martin Axenrot’s kit was very intimidating, consisting of too many Sabian cymbals and DW drums, which were perfectly in-synch with Mendez’s floor-shaking bass riffs. Joakim Svalberg did a great job on keys and impressed with vocals on par with Akerfeldt’s, making them a great match for harmonies and an essential part to the new flowing sound.

Between songs, Akerfeldt acknowledged the crowd and even showed off his mustache. Probably the funniest moment of the night was the frontman getting the audience to head bang to no music, only to call them out on looking foolish – which of course drew a reaction, and got the crowd ready for the next song.

After attempting to take requests for the last few songs and only hearing indecipherable screams, Opeth decided to treat everyone to a couple of earlier death metal songs. This, of course, is exactly what the fans were waiting for — a chance to let loose to some familiar tunes that drew them in from the very beginning. The show ended on a high note, with the floor applauding and chanting for an encore (which never came).

The North American portion of the Heritage Hunter tour continues through May 12, moving through Canada, making a quick stop in Minnesota, and hitting up the East Coast before splitting up and taking off for Europe. Get exact dates and locations at opeth.com, mastodonrocks.com, and ghost-official.com.

Not only is he a multi-media journalist, he is also an accomplished musician. He is the founder of SMI and drives the creative look, feel and branding for the publication. His years of writing, arranging, and performing live music in a variety of genres inform his ability to communicate the message and the mechanics of music. Roth’s work on SMI reflects his philosophy that music is the universal language, and builds community. He believes it has the power to unite people of every race, religion, gender, and persuasion.
Related ItemsAlina ShaninGhostHeritage Hunter TourMastodonOpethSeattle Music HappeningsShowbox Sodo
← Previous Story Live Review: Snow Patrol brings Paramount from whisper to a Roar
Next Story → Remembering Adam “MCA” Yauch – August 5, 1964 – May 4, 2012