By Alicia Kamenick on May 2, 2012@corianderstem 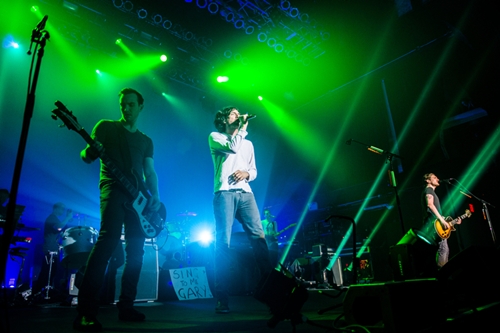 I like Snow Patrol. They don’t leave me feeling particularly excited about their music, but I like them. They write solid songs with good hooks, and Gary Lightbody’s voice is easy on the ears. So when I saw them open for U2 in 2009, I was pleasantly surprised. Sign me up to see them again, I thought.

Their show at the Paramount Tuesday night didn’t lead to a big epiphany of musical passion, unfortunately, but it solidified my view of them as a solid, pleasing pop band who put on a decent show.  Having a personable frontman certainly doesn’t hurt.  Lightbody brought several bursts of genuine laughter from the crowd, and that made the show more memorable than it might have been without that touch of warmth.

Also working the crowd with an easy touch was Ed Sheeran, who already has a fan base here, judging by the high-pitched screams that welcomed him.  The UK singer-songwriter only played four songs, but that short set displayed his talent well.  His take on the gospel standard, Wayfaring Stranger, held the crowd in hushed attention as Sheeran built his own choir of voices and beats with a loop machine, ending with an a capella segment.  He even dropped the microphone for a few lines, his voice carrying easily through the theater.

Snow Patrol didn’t play anything off their latest album, Fallen Empires, until several songs into the set, instead leading off with more familiar tunes like Hands Open and Crack the Shutters.  Take Back the City was preceded by an appropriate comment about Seattle’s earlier May Day ruckus.

It wasn’t a surprise that the ubiquitous Chasing Cars got a huge response, considering Seattle’s imaginary world of Grey’s Anatomy was partially responsible for its success.  But that song is so recognizable that it would have gotten a huge response on the moon.

The high point of the night was Lightbody bringing the crowd to silence during Shut Your Eyes in order to sing the chorus back to him in hushed voices before building from, as he said, “a whisper to a roar.”

That kind of sweet talk will probably bring me back to see them again, even if they’re more pleasant than thrilling.

2. Take Back the City

4. This Isn’t Everything You Are

8. Set the Fire to the Third Bar

9. Make This Go On Forever

Alicia is a Midwest transplant who loves Seattle but misses thunderstorms. Her musical obsessions began when her coolest aunt gave her a copy of K-Tel’s Rock 80 album for Christmas when she was 7. She spent many years studying piano and voice, but the force of rock and roll won, so while she still sings in a local chorale, her true musical passions lie more with The Beatles than with Beethoven. When she’s not working at her job in HR, she can be found singing bad pop songs at the top of her lungs … although sometimes she does that
Related ItemsAlicia KamenickLive ReviewSeattle Music HappeningsSnow PatrolThe Paramount
← Previous Story Live Review: Storm Large reigns at The Neptune
Next Story → Live Review: Heritage Hunter Tour shakes SoDo