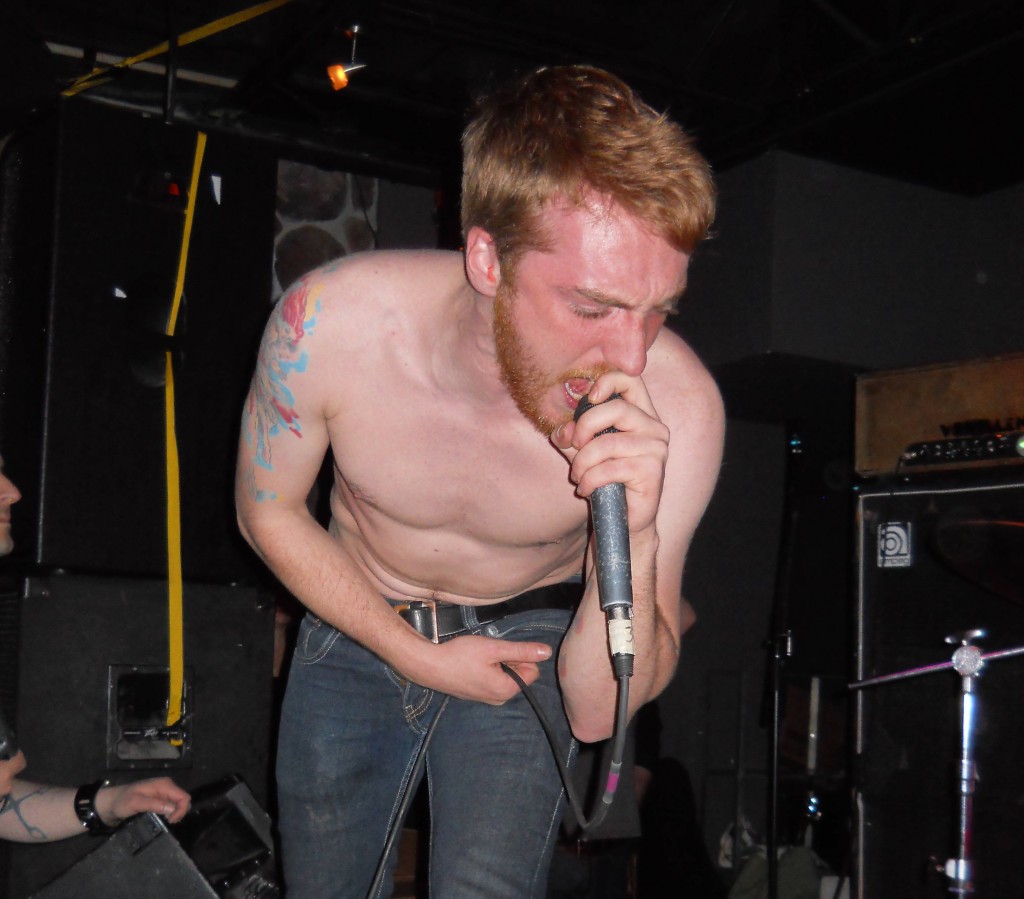 Shirtless and manic, Kennedy from Monogamy Party screams and contorts his body on stage at the Highline in Capitol Hill, April 26th. Over and over again he screamed, “This life is worse than death,” with Keith’s smashing drums and Yos-Wa’s ominous and unforgiving distorted bass guitar, while sweat dripped off his long beard.

The band members don’t list their last names. While it started as a somewhat of a joke, Yos-wa said, they liked the idea of letting the music and art speak for itself. To be clear, Monogamy Party has a lot to say.

“Ideally, at first, I was writing more about the disconnect between wanting to love people but at the same time I’m living in a city surrounded by drugs and violence,” Kennedy said.

The band’s lyrics range from substance abuse (“Are there drugs on your person; could I score some off you”) to violent, brutal imagery (“And it’s a great night to end a life, legs contort on the sidewalk”).

While Kennedy said he enjoys the lighter side of life, he doesn’t necessarily want to talk about it in his music. “The darker side of humanity is more interesting,” Yos-wa said, adding that while Kennedy may talk about some perverse topics, he’s not as twisted as his lyrics might make him seem.

When Yos-wa and Kennedy started the band, they wanted to write catchy rock songs they could tour with, but realized that the punk and hardcore style fit best with their musical interests.“I like to be hit by noise and sound,” Kennedy said. Yos-wa said that the band’s current tracks are “just pop based songs made dirty.”

Even when Yos-wa played in indie rock bands, Kennedy said Yos-wa still acted like he does on stage with Monogamy Party – on the side jumping and yelling. “I like getting rowdy whether I’m playing the music or spectating,” Yos-wa said.

The band’s material often starts with Yos-wa, who writes  an onslaught of different riffs on his bass and proposes them to the other two to verify if they are “good or bullshit,” he said.

Their debut record, “Pus City,” only has six tracks. Similarly, the band opts to play only six songs in their live set. Most of the time,  a couple are from the album.  Yos-wa said it is an homage to the punkiness of the 1980s.

In just a short set, the band unsheathes their secret weapon – playing off of each other’s unrelenting energy. There’s a lot of shouting, leaping, and cursing to be expected at a Monogamy Party show. At the Highline, Keith set his drums up just a few feet from the edge of the stage, making the rest of the space smaller, and pushing Yos-wa and Kennedy closer to the audience.

Kennedy arched his back and wailed his cryptic, threatening lyrics with a maddening and disturbed glare, as his face turned a frightening hue of red. At one point, he torpedoed himself without warning into the thrashing crowd.

On the side-a label of their 10’’ vinyl record, a list of potential band names is crossed out: Montgomery Party, Androgyny Party, and Bin Laden Safari. All may be ridiculous, but have one thing in common with their current name: they’re all tongue-in-cheek.

Kennedy says often they get scoffed at for their band name by venues and bookers.

“Ha, [Monogamy Party] doesn’t sound like a fun time,” Kennedy said he remembers one venue telling him on the phone. He said that it matches the satirical aspects of the band. Yos-wa commented that the name might sound like fun, quirky indie-pop to some. The band wasn’t sure what people would take from their music, said Yos-wa, but they’ve garnered positive responses from the music community.

“It’s nice, but we’d still be doing it if everyone hated us,” Kennedy said.

Despite what their lyrics may suggest, the band insists that they mean well and have a lot to say about the current state of humanity.

“We’re all moral people,” said bassist Yos-wa, “we care too much about what’s going on.”

Dusty Henry got his first bite of the local music scene at a Schoolyard Heroes show in Bremerton, Wash. and has been craving it ever since. He graduated from Seattle Pacific University in 2012 with a degree in Journalism. He has written for CityArts Magazine, KEXP.ORG, SSG Music, Ballard News-Tribune, Queen Anne and Magnolia News, and more. He’s an avid record collector so if you see him digging through record bins (most often Sonic Boom in Ballard) feel free to say hello! Dusty also manages the local music blog PreAmp where he writes about smaller local acts and provides resources for bands as they continue to grow.
Related ItemsCapital HillDusty HenryHighlineMonagamy PartySeattle Live MusicSeattle Music Happenings
← Previous Story SMI Radio Ep. 59 On Demand: Ayron Jones and Jeremy Westfall (NW Lovefest)
Next Story → SMI Feature: Seattle Music Genome Project