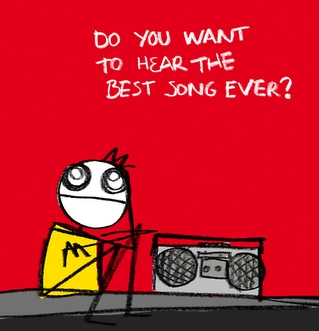 Much like the biological gene pool, a city’s music scene must have a significant amount of variation available for selection. If the genomic makeup of a region’s individuals becomes too similar, then eventually, much like the cheetah, every mating partner you meet will be the genetic equivalent of your brother or sister – potentially turning a thriving music scene into something like a rural Alabama ho-down.

However, if there is an abundance of genotypes and phenotypes to mix under external selective pressures, then the possibilities are endless! Is this analogy a bit convoluted?

As of this day in May 2012, a lot of very interesting things are going on in Seattle, Washington.

The goal of this piece is multi-faceted. I, on one hand, want to introduce you to some of the local stuff that has me excited; and on the other, I want to you to do the same for me by posting your suggestions. So, to return to the genetic theme briefly, think of this article as my contribution to the sequencing of Seattle’s musical genome, and the comments section your contribution.

I’m really excited about a few bands from a local D.I.Y. record label called Good to Die Records. GTDR is the brainchild of Nik Christofferson, a.k.a. Seattle Rock Guy, and is gaining much-deserved recognition with an excellent roster of heavy-hitting acts, including Absolute Monarchs, Monogamy Party, Brokaw, Dog Shredder, Deadkill, and Sandrider. If you like your metal different from the horrible cookie-monster type, then look no further than Good To Die Records. Each band shines as a testament to the distinguished music sensibility of Nik Christofferson.

This next band was actually suggested to me by Brent Amaker, from Brent Amaker and The Rodeo. (SMI interview here.) The band is called Pony Time, and their self-titled EP, put out by Per Se Records, is on constant rotation at my house. Powerful, poppy, and punky describe this 60’s garage rock duo. Check out their video for my second favorite song of theirs, called “Lori and Judy.” (My first favorite is “Tacocat Scraps.”)

My third suggestion is singer/songwriter, Barton Carroll. A true wordsmith, Carroll can have you laughing at one moment and then weeping on your steering wheel the next. Wait, did I just admit…? Ahem! Moving on – don’t take it from this sniveling baby, go listen to his song “Shadowman” and see if you don’t get choked up. After wiping your tears, check out this video of him performing “Poor Boy Can’t Dance.”

These suggestions are just a small peek into the expansive music scene of the Northwest. I could go on, but in the spirit of keeping it simple, I’ll just make a list and encourage you to get to know these artists.  There’s no doubt in my mind that all of these talented people devote the majority of their free time to their art. For some people, music is a just a hobby, but I think it’s safe to say that everyone in this article (myself included) views it as a way of life. We create not only because we love it, but because we need it. It’s in our genes.

So please, spread the word, show some love, and tell me about your favorite local music. Thank you.

Day Dream Vacation: The collaborative effort featuring Dave Einmo from Head Like a Kite, Asy from Smoosh and Nat Damm from Sandrider.

The Purrs: indie-rock veterans of the NW. Psychedelic, shoe-gazy and a blast to see live.

My Goodness: Blues, Garage Rock duo reminiscent of the Black Keys, but stand on their own with an idiosyncratic sound.

Brent Amaker and The Rodeo: Cinematic Western Music that you must hear to understand.

Star Anna and the Laughing Dogs: “Star Anna is an American original.” -Mike McCready…need I to say more?

Not only is he a multi-media journalist, he is also an accomplished musician. He is the founder of SMI and drives the creative look, feel and branding for the publication. His years of writing, arranging, and performing live music in a variety of genres inform his ability to communicate the message and the mechanics of music. Roth’s work on SMI reflects his philosophy that music is the universal language, and builds community. He believes it has the power to unite people of every race, religion, gender, and persuasion.
Related ItemsFake Label RecordsSeattle Music Genome ProjectSeattle Music Happeningstimmy held
← Previous Story SMI Artist Spotlight: Welcome to the Monogamy Party
Next Story → Bumbershoot 2012 partial lineup