By Alicia Kamenick on May 10, 2012@corianderstem 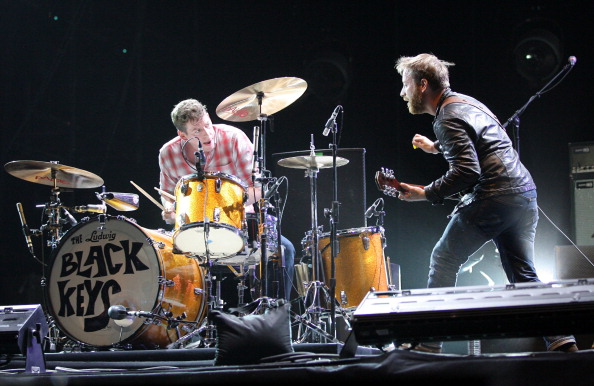 Midway through The Black Keys’ show at Key Arena Tuesday night, a little flutter of white above my head caught my eye. Floating down from a rafter, knocked loose by the driving music, was a heart-shaped piece of confetti: a remnant from April’s Coldplay concert, showing the contrast between a show with frills, and a show without. Dan Auerbach and Patrick Carney have minimal frills. But who needs them when you can generate that much oomph from two musicians? Backed by a few video screens, two additional musicians for some songs, and a brief appearance by two mirror balls, it was a solid show of straight-forward stomping blues rock. The Ohio duo tore through sturdy versions of their recent hits (Howlin’ For You, Tighten Up, Lonely Boy), with most songs in the set coming from their last three albums.

Auerbach’s interaction with the crowd came across as fairly rote (“Come on, Seattle – let’s make this one great!”) with the exception of a fond mention of local garage rock heroes, The Sonics, who the band met before the show.  Based on the tepid crowd response to this shout-out, it was unclear if some people are unaware of The Sonics, or were wondering why The Black Keys were talking about Seattle’s former basketball team.

Little Black Submarines was a highlight, going from gentle ballad to blues explosion. The encore opened with two mirror balls at the front and back of the arena, turning Key Arena into a giant roller rink as Auerbach sang Everlasting Light in fine falsetto. Arctic Monkeys opened the show, playing for almost a full hour … and that’s all I can say about them, as they were so loud that my ears hurt even with ear plugs.  (Which, I believe, officially makes me old.)

(Editor’s note: No, it doesn’t! But keep up with all the Black Keys action here.)

6. Gold on the Ceiling

Alicia is a Midwest transplant who loves Seattle but misses thunderstorms. Her musical obsessions began when her coolest aunt gave her a copy of K-Tel’s Rock 80 album for Christmas when she was 7. She spent many years studying piano and voice, but the force of rock and roll won, so while she still sings in a local chorale, her true musical passions lie more with The Beatles than with Beethoven. When she’s not working at her job in HR, she can be found singing bad pop songs at the top of her lungs … although sometimes she does that
Related ItemsKey ArenaLive ReviewNewsSeattle Music HappeningsThe Black Keys
← Previous Story Remembering Adam “MCA” Yauch – August 5, 1964 – May 4, 2012
Next Story → Remembering Robin Gibb 1949 – 2012