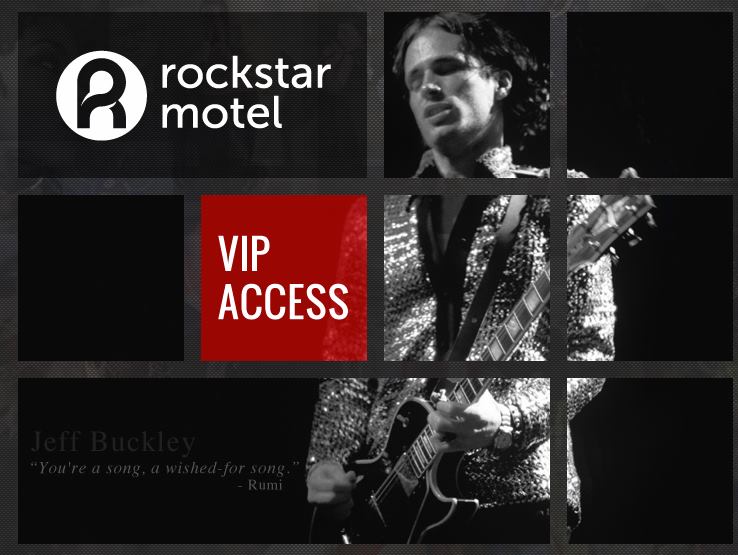 When RockStar Motel version 1.0 launched this past fall, It was a brilliant concept right out of the box, but it was merely a beta test. Even after a successful initial launch, it was apparent that the platform had a lot of potential but may have been lacking a bit in terms of user experience and ease of use. That’s why they do beta tests, and the test served its purpose in helping the gang at RSM redefine the look, feel, and overall functionality.

After receiving feedback from customers calling for more added features and intuitiveness, the RSM team went back to work with heads fully down to come up with new version of RockStar Motel.The first thing on the agenda was to develop a sexier and more robust user interface. The new version is now ready for prime time. The newer platform is very scalable and versatile. New functionality and features as well as unique media content will continue to be added.

RockStar Motel, founded by CEO and musician Luca Sacchetti, is a music social networking site like no other. Egalitarian in spirit and form, RSM takes the power out of the hands of the record labels and gives the power to the people.

According to the good folks at RockStar Motel, it is the fans who sign and represent their favorite artists and participate in their success, while earning recognition and perks. For the first time, it is the music fan that has the power to not only “break” an act, but also to be truly rewarded for it.

The cyber-music landscape is starting to become widely populated with sites and platforms such as Rhapsody, Pandora, MOG, Spotify, Rdio and Turntable.fm. Facebook  recently integrated music onto its platform. Apple has also jumped into the game with iCloud. RockStar Motel is moving into a wide open space, ripe for innovation.

What sets RockStar Motel apart is that it’s designed for music fans to discover new music and have some type of ownership in the bands they enjoy. The new platform is highly interactive, engaging, functional, and aesthetically cool.

“RockStar Motel is going to redefine the relationship between the artist and the fans. Essentially what we are doing is empowering the fan to (virtually) sign and represent the artist.” Sacchetti stated. “The reason that I was even inspired to create RockStar Motel is that these other sites (like Spotify) are very static, they were never designed to help the artist or empower the fan.  My goal for years was to create something where an artist can develop their talent. Just streaming the artists music does nothing for the artist.”

RockStar Motel has the rights to 12 million song tracks. As of now, the artists behind those tracks can claim their accounts and use them to interact with fans. Musicians that haven’t signed with record labels can join, too. Sacchetti says the site can use the data it collects about musical taste to start matching potential fans with artists.

The new platform has the potential to become a major disruptive force in the music industry. It certainly will provide another viable avenue for artists to reach fans who will promote them. An artist can have a virtual street team helping them evangelize their music and build valuable, lasting relationships with them.

Today, RockStar Motel looks like a place artists and fans may just want to check into, hang out, and you may never want to leave – it’s that fun!

Admit it, you’ve always dreamed of being a rock star or being in the music biz, so here’s your chance! which begs the question from Luca Sachetti, “Can you handle it?”

Late last year, RockStar Motel CEO Luca Sacchetti was a guest on SMI Radio. Luca spoke about some of the changes to the platform.  Check out the interview below.

Not only is he a multi-media journalist, he is also an accomplished musician. He is the founder of SMI and drives the creative look, feel and branding for the publication. His years of writing, arranging, and performing live music in a variety of genres inform his ability to communicate the message and the mechanics of music. Roth’s work on SMI reflects his philosophy that music is the universal language, and builds community. He believes it has the power to unite people of every race, religion, gender, and persuasion.
Related ItemsExaminer.com SacLucca SacchettiRockStar MotelSeattle Music Happenings
← Previous Story Remembering Robin Gibb 1949 – 2012
Next Story → THE WHITE RABBIT: CLOSING OF A FREMONT LANDMARK