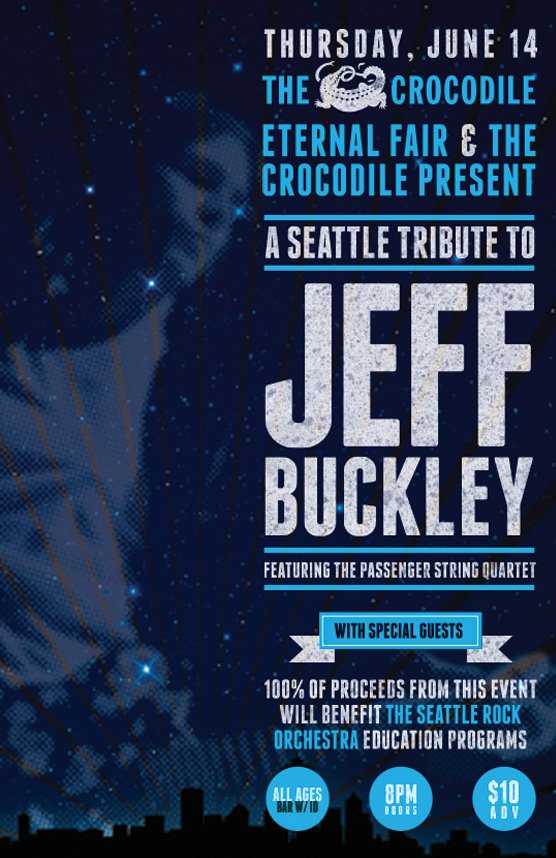 Many musicians and singers that I know who had the opportunity to see the late and great Jeff Buckley perform live were so moved and mesmerized that when the show was over they wanted to quit their craft. The feeling was that they could never match the artistic passion, integrity and skill that he possessed. Jeff Buckley had that much of a profound effect on artists in his short life and he was that good.

Sadly, Jeff left us way to soon. At the age of 29, the singer / songwriter tragically drowned on a warm spring night, May 29th while swimming in Wolf River Harbor in Memphis Tennessee.

The tenor, with a three and a half to four octave range has inspired contemporary artists such as Michael “Fitz” Fitzpatrick from Fitz and The Tantrums. The soulful frontman cites Buckley as having the greatest influence on his style.

Entrepreneur Luca Sacchetti was inspired to launch the newest music social networking site, Rockstar Motel after seeing Buckley perform and then and meeting him after the show. Jeff’s music is widely regarded but was rarely showcased in the Pacific Northwest.

It has been fifteen years since his death but even though Jeff Buckley may no longer be with us physically, his music and legacy continue to live on and inspire others in a big way.

Seattle’s Eternal Fair in partnership with The Crocodile will celebrate the music of Jeff Buckley this Thursday, June 14th. 100% of the proceeds from the show will go to The Seattle Rock Orchestra’s education programs. The band will perform all of the songs from Buckley’s only full-length release “Grace,” as well as a number of posthumously released songs and covers by the late artist.

After releasing their debut EP to positive reviews and a packed release show, Eternal Fair will tackle their next challenge by paying homage to the legendary singer/songwriter. Accompanying them will be guitarist Kathy Moore, vibraphonist Jacques Willis, and Andrew Joslyn with the Passenger String Quartet. In addition, The trio will invite some of Seattle’s most talented singers on stage throughout the evening as guest vocalists.

I speak with Eternal Fair’s Andrew Vait about the show this week and what inspired he and Eternal Fair to put together the tribute show.

Not only is he a multi-media journalist, he is also an accomplished musician. He is the founder of SMI and drives the creative look, feel and branding for the publication. His years of writing, arranging, and performing live music in a variety of genres inform his ability to communicate the message and the mechanics of music. Roth’s work on SMI reflects his philosophy that music is the universal language, and builds community. He believes it has the power to unite people of every race, religion, gender, and persuasion.
Related ItemsAndrew VaitEternal FairJeff BuckleyJeff Buckley Tribute ConcertSeattle Music HappeningsThe Crocodile
← Previous Story Three Imaginary Girls 10 Year Anniversary Bash (Photo Slide Show)
Next Story → SMI Radio Ep. 63 On Demand: Vicci Martinez and Pete Johnson (Perry Acker)