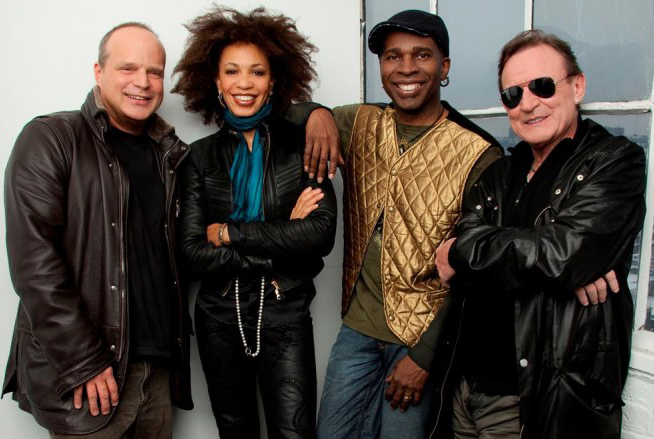 The name Tony Williams carries a long list of achievements that changed the face of modern drumming, and speaks volumes about the evolution of our beloved jazz music. You could say, reduced to its essence, the voice of Tony Williams paved a road through space and time.

Now, it seems time is catching up with us, signaling the arrival of a band named Spectrum Road, which in short order opened the door to illuminate the landscape of Tony’s music. For the all-star group of musicians who assembled in 2008 to celebrate his spirit – Jack Bruce, Vernon Reid, John Medeski, and Cindy Blackman Santana, it was clear from the start this endeavor was destined to surpass the promise of stellar musicianship and sweet nostalgia.

The self-titled debut, Spectrum Road (Palmetto Records), recorded in only five days, was released to coincide with a North American tour which began at the Bonnaroo Music Festival, June 7th in Manchester, Tennessee. It will stop in Seattle June 21st for four nights at Dimitriou’s Jazz Alley.  Although the albums is new, the seed was planted back in 2003, when Jack and Vernon were on tour together.  Inspiration sprung from their discussions about the Lifetime band, particularly the early phase which helped to establish jazz fusion as a viable genre.

Jack participated in the second edition of Lifetime with John McLaughin and Larry Young, lending bass and vocals to the 1970 album Turn It Over, recorded shortly after making history with Eric Clapton and Ginger Baker in Cream.  From this connection, Vernon envisioned the birth of Spectrum Road, and became a critical component in recruiting those best-suited for the journey.  A true chameleon on his instrument, Vernon’s sound can be characterized by a stylistic stamp that largely defined the highly creative and successful band Living Colour, and with a flamboyant, genre-defying approach to solos that earned him a place in Rolling Stone’s top 100 guitarists of all time.

It was Vernon’s idea to bring in drummer Cindy Blackman Santana. She is widely known for her association with Lenny Kravitz and touring with husband Carlos Santana, and for being a fine support for pillars in jazz such as Joe Henderson, George Benson, and Wallace Roney.  Cindy was an ideal candidate, influenced early on by Tony Williams, the first drummer she ever saw in person.  The fact that he used all four limbs interdependently not only demonstrated his mastery and singular technique, but forever embedded into her mind what it was like to witness an innovator of sound – watching him operate on a canvas so limitless that it completely broke down the conventional role of the drums.  On the album, Cindy demonstrates both reverence of Tony, as well as a fiery dimension of her own, bringing a refreshing sense of leadership that comes across quite naturally.

The spectrum is complete with the addition of John Medeski, a passionate player whose sonic palette comes to life behind vintage keyboards and with the tasteful application of treatments and effects.  Aside from the immensity of Medeski’s signature B-3 sound, there are a few surprises that come up along the way, including a bass clarinet synth solo that borders on psychedelic, and exhilarating improvisations on the Mellotron, an instrument of the 60’s more commonly associated with prog rock, and scarcely heard in jazz.

What can be expected as Spectrum Road fills the room at Seattle’s Jazz Alley is a combination of searing renditions from the late Tony Williams’ electric-era catalog, as well as a glimpse into new work that very generously pays homage to one of jazz’s great masters. The sheer propulsion of this unit fearlessly determines the next stop through an enchanted wilderness, leading audiences down a road they otherwise might never discover.  Go get this album immediately, let your imagination run away with the sound, and prepare yourself for an unforgettable moment in jazz history.

Not only is he a multi-media journalist, he is also an accomplished musician. He is the founder of SMI and drives the creative look, feel and branding for the publication. His years of writing, arranging, and performing live music in a variety of genres inform his ability to communicate the message and the mechanics of music. Roth’s work on SMI reflects his philosophy that music is the universal language, and builds community. He believes it has the power to unite people of every race, religion, gender, and persuasion.
Related ItemsCindy Blackman SantanaDimitrious Jazz AlleyJack BruceJazz and FusionJohn MedeskiJonathan SindelmanNewsSeattle Live MusicSeattle Music HappeningsSpectrum RoadVernon Reid
← Previous Story SMI Radio Ep. 63 On Demand: Vicci Martinez and Pete Johnson (Perry Acker)
Next Story → Battling for Mayhem Fest at Studio Seven