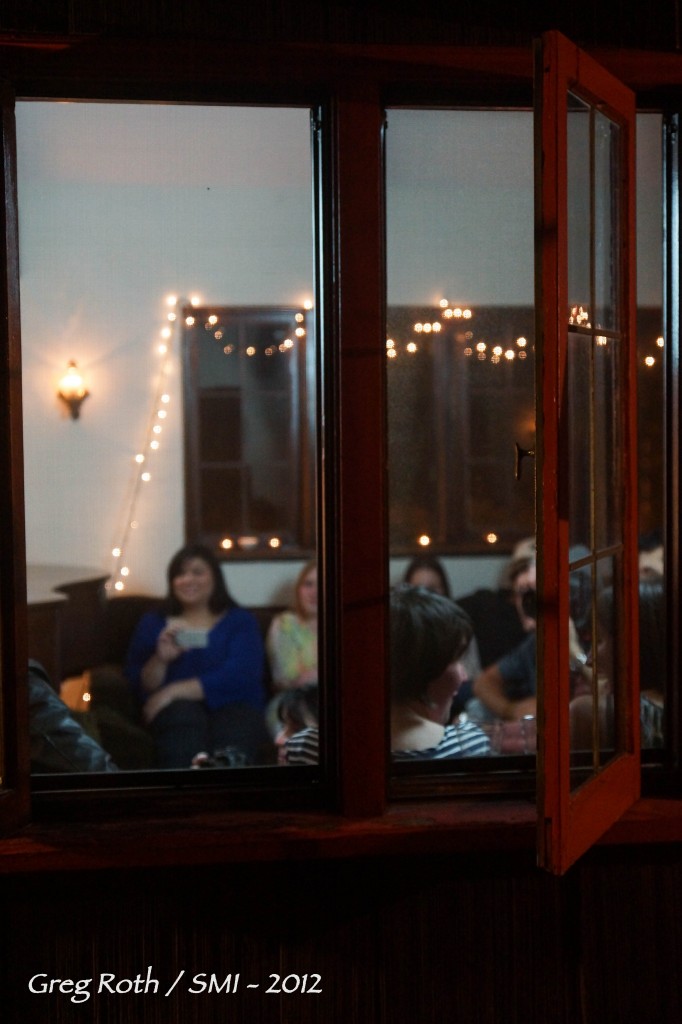 All Photos By Greg Roth

For those of you that have taken the opportunity to attend a Seattle Living Room Show, you are probably aware that these are small, low and unplugged affairs where the focus is totally on the music and the artist. There is no stage, no light show, no clanging glasses or idle chatter that happening in the venue while the artists perform. In other words, there is nothing that separates the artists and their music from the audience. This is conducive to creating a symbiotic connection between musician and fan throughout the evening.

After the performances the artists graciously hang out to chat with fans, snap photos and sell a few, discs, T-Shirts, stickers, etc. This makes the SLS a very unique musical experience and a celebration of community.

On paper, the Blue Eyed Soul / Pop outfit The BGP and rhythmic rockers Ben Union would seem like an odd pairing. But these two talented groups have a lot more in common than one would think. Put aside the fact that both bands operate out of “The 253.” Both groups have respective reputations for putting on high energy and infectious shows for their fans. Be it a Seattle club or a living room, they are not afraid to let it all hang out. At this week’s show, hosted by Kristen and Carrie Watts, the boys brought their high energy performances to the appreciative living room audience.

The BGP (AKA The Brandon Ghorley Project) treated fans to acoustic versions of tracks such as “Manhattan” and “It’s a Jungle,” as well as their latest single “Heartbreak, Heartbreak” off of their most recent record, Love and Rent. Ghorley sat behind house baby grand and charmed the crowd with his soulful voice and witty in-between song banter and story telling. He broke out his newest toy he called “The Huricane” (a type of blow organ also known a Melodica) and gave the crowd with an animated and spirited solo. A BGP set would not be complete without Ghorley standing on top his piano bench one of the group’s up tempo numbers.

Ben Union is one of the more entertaining live acts in the region. They are a tight band that plays a rootsy and funk blend of rock. Their live show is bit of a throwback to the “rock star era.” of the 70’s and 80’s. Their immense sound translated quite well to the living room environment. If an artist has material with strong melodies and song structure their songs should work well stripped down. Ben Union illustrated this point quite effectively by playing inspired and unplugged versions of songs off of their most recent effort, This Blessed Union Volume I. Some brilliant highlights from their set were “She’s In Control” and “Maybe.”  The band was joined toward the end of the set by Portland and fellow Setlist Music artist, Matt Brown. At the end of the set everyone in the house got up off of their seats and joined “The Union” for their closing number.

The BGP and Ben Union showed that their respective big sound works well in the small room nestled in a private location north of The Emerald City. They worked every inch of the space and steamed up the windows in the process.

If you are interested in finding out more about the Seattle Living Room Shows or attending a show in person go here.

Not only is he a multi-media journalist, he is also an accomplished musician. He is the founder of SMI and drives the creative look, feel and branding for the publication. His years of writing, arranging, and performing live music in a variety of genres inform his ability to communicate the message and the mechanics of music. Roth’s work on SMI reflects his philosophy that music is the universal language, and builds community. He believes it has the power to unite people of every race, religion, gender, and persuasion.
Related ItemsBen UnionSeattle Live MusicSeattle Living Room ShowsSeattle Music HappeningsSMI RadioThe BGP
← Previous Story Battling for Mayhem Fest at Studio Seven
Next Story → Live Review: Vicci Martinez at the Showbox (Photo Slide Show)