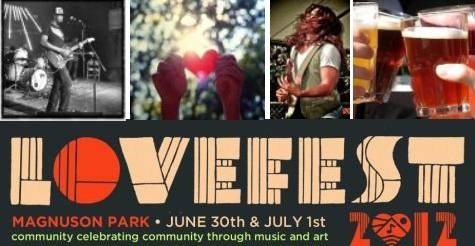 In less than a week, some of the hottest music artists will grace several stages at the beautiful Magnuson Park for Northwest LoveFest 2012. There will be over 45 local and regional bands, tethered hot air balloon rides, two beer gardens, open mic contest, teen dance team competitions, over 50 nonprofits showcases, and more. The festival takes place over three days next weekend, June 30th through July 1st, with a kickoff party happening on Friday, June 29th featuring The Stax Brothers, Global Heat, 20 Riverside, Down North and Cazuela de Condor.

Like the Nothwest itself, NWLF offer a very diverse selection of musical genres. (See lineup below.) The organizers have a real passion for music and have volunteered their time and energy to put together the stellar bill, as well as sponsors, vendors, and events which will contribute to a fun, community-building festival.

Something unique about NWLF is that this festival is not-for-profit. The organizers’ primary objective as a nonprofit organization is to bring like-minded people together to celebrate community through music and art. From the NWLF website, “This does not apply to just citizens and artists but also to the nonprofits that serve the various needs within our community as well.”

Over the past two years, Northwest LoveFest has shown support for nonprofits by providing free booth spaces to share their message. “We believe the participation of nonprofits add depth and bring an overall positive experience to the festival. To further our commitment and support our fellow nonprofits, LoveFest is starting a new program for 2012 that now offers financial support (25% to 50% of advanced ticket price) to our nonprofit partners.”

If you like great Northwest music, then three days of hot sounds from a robust lineup of artists doin’ their thing for a noble cause sounds like a pretty cool way to spend a weekend to us!

And, for the first time, LoveFest will have a children’s show featuring

There will also be a kids activity area, featuring arts, crafts, and activities, along with free bouncy houses and more.
General Admission: $15

To purchase tickets, go to http://www.brownpapertickets.com/e/224452

Not only is he a multi-media journalist, he is also an accomplished musician. He is the founder of SMI and drives the creative look, feel and branding for the publication. His years of writing, arranging, and performing live music in a variety of genres inform his ability to communicate the message and the mechanics of music. Roth’s work on SMI reflects his philosophy that music is the universal language, and builds community. He believes it has the power to unite people of every race, religion, gender, and persuasion.
Related ItemsLive MusicLive Music PreviewMagnuson ParkMusic FestivalsSeattle Music Happenings
← Previous Story New Music Preview: Daydream Vacation – ‘Dare Seize The Fire’ (Video)
Next Story → Fitz and The Tantrums reward fans with another musical gift (Free Download)