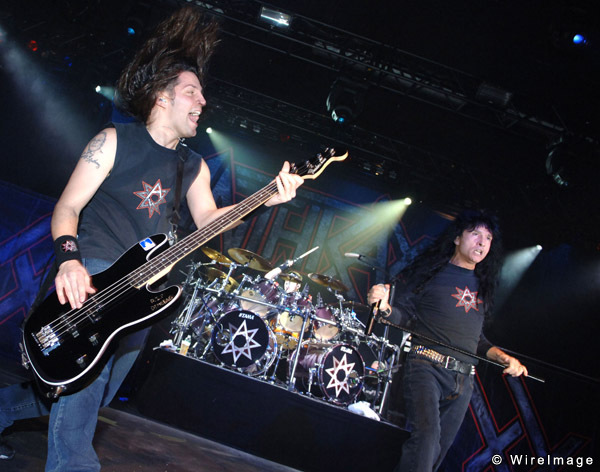 Metal fans are in for treat at this year’s Rockstar Energy Drink Mayhem Festival. Packed with tons of amazing talent, ranging from veterans like Anthrax, Slipknot, and Slayer, to newer faces including I, The Breather, High on Fire, and Asking Alexandria, tickets are selling out and the excitement is building. The festival is kicking off in San Bernardino, Ca., June 30, and rocking the country through August 5, with a quick stop at the White River Amphitheatre July 3.

The annual metal machine was born in 2008 and has featured up and coming musicians, as well as famous names, including Marilyn Manson, Korn, Disturbed, Mastodon, DragonForce, Killswitch Engage, Rob Zombie, Dethklok, Machine Head and In Flames, just to name a few. Sponsored mainly by Rockstar, the shows never run low on energy, and the moshpits persist for hours.

With so much talent hopping on the Mayhem train year after year, the caliber of performers and attendees has grown, causing the festival to showcase it all on multiple stages.

The fans are not the only ones thrilled for the festival. Anthrax’s Frank Bello said the band is glad to be back and “cannot wait to rage,” while Motorhead’s Lemmy is looking forward to touring with Slipknot, whom they have not seen in years, according to his recent Q&A provided by his publicist. Lemmy’s also excited to visit Boise, Idaho, which will be a first for Motorhead.

As for Anthrax, with most of the founding members reuniting for the recent recording of Worship Music, the band is ready to rock and are using this opportunity to remind lifelong fans why they fell in love with the band all those years ago.

Anthrax’s Worship Music is a testament to their hard work and constant need to create. Coming off the South American and European tours, the band is wasting no time and jumping into Mayhem, which they’ve been looking forward to for months.

No one can dispute the evolution of Anthrax over the years, and after all of the success, fame, traveling and the rotating cast of musicians, what keeps the band writing is complete love and passion for what they do.For Bello, it’s what gets him out of bed every morning.

Worship Music receiving raving reviews from the fans amazed Bello, who’s extremely grateful for the unlimited support and understanding of how hard Anthrax has worked over the last 30 years to keep producing their addicting songs.

As for the secret that has kept the band alive all these years, Bello said it’s all about staying true to who they are and working through the moments of friction as they come up. Being in a band is like being a part of a family, so open communication and sacrificing everything for the music is the best remedy for any conflict.

“That’s the way I’ve always lived…The only way I know how to do this is to be myself,” Bello said, adding that it’s what will “separate you from everybody else [and] that’s what people what.”

He sincerely thanks all of Anthrax’s fans for embracing the record and sticking with the band throughout their evolution. To everyone attending Mayhem, Bello said, “I cannot wait to come out and play for you guys. We are genuinely a hungry band. We’re really looking forward to it.”

Seattle’s winner of the first Battle for Mayhem Fest, Never Met A Deadman will be opening the Sumerian stage at the July 3 White River Amphitheater show. The second winner will be crown Sunday, June 24, at Studio Seven after another battle.

Don’t miss the biggest metal festival of the year.

To get tickets for the Mayhem Festival 2012, visit rockstarmayhemfest.com.

As I Lay Dying

Upon A Burning Body

Check out Rockstar Mayhem Festival for the most recent lineup.

Not only is he a multi-media journalist, he is also an accomplished musician. He is the founder of SMI and drives the creative look, feel and branding for the publication. His years of writing, arranging, and performing live music in a variety of genres inform his ability to communicate the message and the mechanics of music. Roth’s work on SMI reflects his philosophy that music is the universal language, and builds community. He believes it has the power to unite people of every race, religion, gender, and persuasion.
Related ItemsAlina ShaninAnthraxFrank BelloMotorheadRockstar Energy Drink Mayhem FestivalSeattle Music HappeningsStudio 7White River Amphitheater
← Previous Story Fitz and The Tantrums reward fans with another musical gift (Free Download)
Next Story → SMI Radio Ep. 64 On Demand: Jeremy Westfall & Pete Shin (NW LoveFest) and Alejandro Garcia (NoRey)