By Alicia Kamenick on August 10, 2012@corianderstem 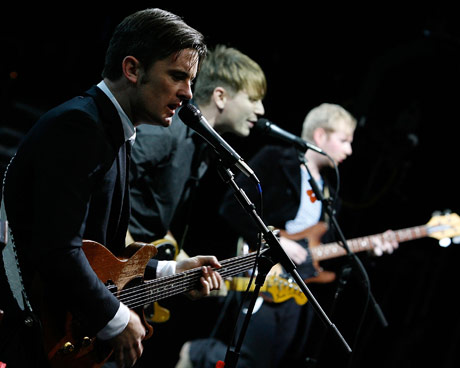 Franz Ferdinand wasted no time in getting the crowd jumping at Showbox at the Market Thursday night. They launched right into The Dark Of the Matinee off their self-titled debut, and from there the band and the crowd barely slowed down.

The Scottish band has been touring despite not having a new album since 2009’s Tonight: Franz Ferdinand, taking the opportunity to show off a few new songs in anticipation of a release planned for later this year.

But in the meantime, they have three solid albums from which to play popular favorites and sprinkle the five new songs throughout. Right Thoughts! Right Words! Right Action! seemed to get the best response of the batch, as it fit in well with their other high-energy tunes.

Singer Alex Kapranos and guitarist Nick McCarthy played off each other, moving to the tip of the stage, on top of the monitors, and, in McCarthy’s case, right into the crowd.  McCarthy also did double-duty on the keyboards, and a highlight was Can’t Stop Feeling, which featured  a pulsing keyboard riff straight from Donna Summer’s I Feel Love. Sure enough, the band did a brief, mid-song cover of the disco classic.

Take Me Out and This Fire were highlights with massive audience participation. All four band members closed the final song Outsiders by beating away enthusiastically on Paul Thompson’s drum kit. Thompson took a quick trip into the audience as a crowd surfer as the rest of the band left the stage.

“Send him back up when you’re done with him,” called Krapanos.

The Dark Of the Matinee

Do You Want To

Alicia is a Midwest transplant who loves Seattle but misses thunderstorms. Her musical obsessions began when her coolest aunt gave her a copy of K-Tel’s Rock 80 album for Christmas when she was 7. She spent many years studying piano and voice, but the force of rock and roll won, so while she still sings in a local chorale, her true musical passions lie more with The Beatles than with Beethoven. When she’s not working at her job in HR, she can be found singing bad pop songs at the top of her lungs … although sometimes she does that
Related ItemsAlicia KamenickFranz FerdinandSeattle Live MusicSeattle Music HappeningsShowbox at the Market
← Previous Story Live Review: Sigur Ros Mesmerizes The Paramount
Next Story → New Music Review: Gaytheist – ‘Stealth Beats’