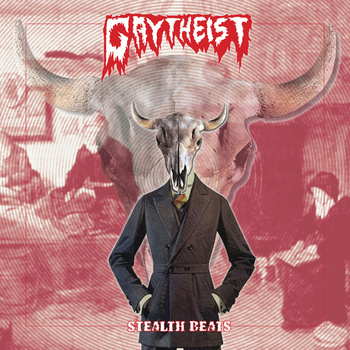 Tim Hoff (bass), Jason Rivera (guitar/vocals) and Nick Parks (drums), AKA GAYTHEIST, have been contributing innovative music to the Portland musical landscape for the past 15 years. Originally named POWER BOTTOM (that name turned out to be taken, so they settled on their arguably ameliorated moniker) are the latest addition to the increasingly popular Good To Die Records, founded and run by Seattle Rock Guy Nik Christofferson, and they couldn’t be more excited.

This makes sense as it is the perfect home for GAYTHEIST with their punk/metal/hardcore influenced heavy rock and roll. In my opinion, they are the best representative of what kind of sounds GTD Records has to offer. I’m not saying that they’re the best band on the label; that distinction would be too hard to make with the label’s plethora of hard-hitting, aggressive acts currently dominating the Seattle rock scene. But they would be a good introduction for those curious about what’s going on with Nik and his crew.

Their latest release, STEALTH BEATS, has the air of the 80’s hardcore explosion, fused with chunky riffs adopted from modern hardcore, accompanied by singing styles that range from beautifully clean blasts to trashy, throat-tearing screams. The tonal quality of both the bass and guitar are perfectly dialed in, and share the weight of the fuzzy doom corralled by the thunderous, and ably-placed percussive whacks.

Lyrically, this album is a true delectation. Rivera offers thoughtful and often comedic words covering a variety of topics ranging from personal struggle to social issues with a cool and collected classiness. Atheism and homosexuality, among many other debate-raising issues, can be slippery slopes for lyricists if approached inappropriately. However, Rivera harnesses an uncanny ability to pique the audience’s political and emotional curiosity without being too confrontational and avoiding that ever-annoying ‘”in your face” attitude.

STEALTH BEATS is set to be released digitally and on vinyl on August 21st, 2012.

Suggested tracks include, but are not limited to, Stampede of Savings, Pointless-Helpless, and Talk Doctor.

Not only is he a multi-media journalist, he is also an accomplished musician. He is the founder of SMI and drives the creative look, feel and branding for the publication. His years of writing, arranging, and performing live music in a variety of genres inform his ability to communicate the message and the mechanics of music. Roth’s work on SMI reflects his philosophy that music is the universal language, and builds community. He believes it has the power to unite people of every race, religion, gender, and persuasion.
Related ItemsGaytheistNew Music ReviewSeattle Music Happeningstimmy held
← Previous Story Live Review: Franz Ferdinand gets Showbox jumping
Next Story → People With Instruments Music Festival kicks off this weekend