People With Instruments Music Festival kicks off this weekend 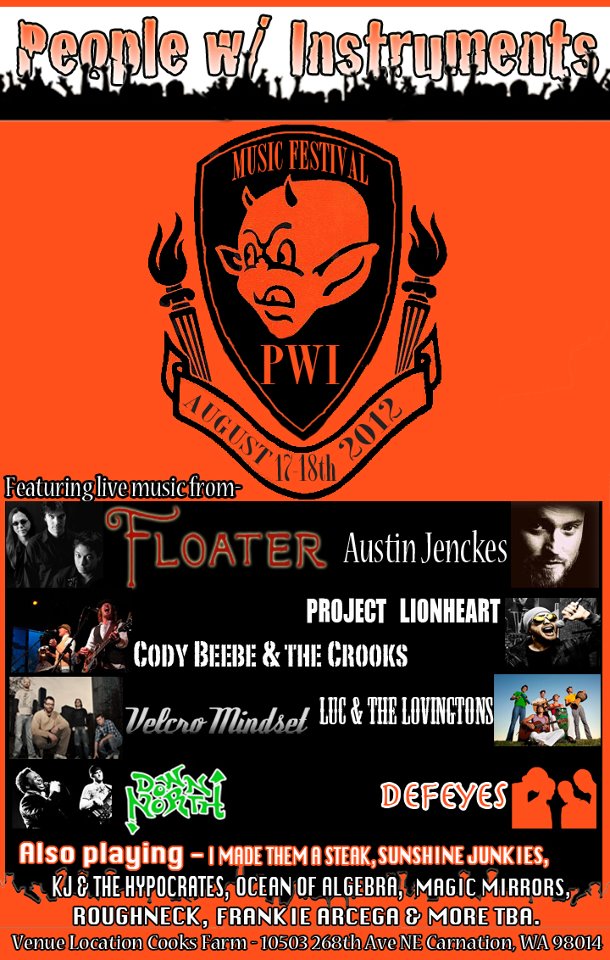 After months of planning, networking and time-consuming organization, the People With Instruments first annual music festival is ready to start the two-day party this Friday, August 17. Co-founders Morgan Henley, John Radovich and Greg Marx are no strangers to the music scene, and have collaborated on this project to feature local musicians nearby, courtesy of Dan Cook, owner of Cooks Farm near the Snoqualmie River (between Carnation and Duvall).

The festival’s array of talent will have something for everyone to discover and love. From reggae and rock, to acoustics, DJs and comedy, the three stages will keep the music flowing nonstop. Roughneck, Ocean of Algebra, and KJ & the Hypocrites will kick off People With Instruments Friday evening, continuing the event Saturday early afternoon. According to Henley, some of the best bands in the Seattle area will be featured on the main stage, including Project Lionheart, Cody Beebe & the Crooks, Luc & The Lovingtons, Down North, Magic Mirrors, Velcro Mindset, The Defeyes and I Made Them a Steak.

Portland’s gem Floater will be headlining the main stage and giving their huge fan base a show to remember. Their distinguished upbeat rock sound has grabbed national attention over the years, helping establish a loyal following and sell out venues. Austin Jenckes is another name to see rocking the main stage Saturday night. This Duvall native has moved to Nashville, Tenn., where he’s been able to further his musical career and share his talent with many. According to Henley, Jenckes is “the Valley’s prodigal son.”

For those looking to dance it up in the Valley, DJs E-Drenalin and Dunjin are confirmed to keep the party going after Floater. A surprise Dj is in the works – someone who is said to be a Seattle favorite.

Acoustic performers from Alex Rasmussen, Blake Noble and Sunshine Junkies are among the most anticipated sets for the second stage. While their individual styles landed them a spot on the long list of performers, it’s their ability to convey emotion through song that will move the audience.

As for the future of People With Instruments Music Festival, Henley hopes to bring in food vendors, breweries and artist to join the musicians in celebrating the Northwest talent and eventually joining the ranks of festivals like Sasquatch and Lollapalooza. 600 to 1000 music enthusiast are expected to break in the new ground this year, with increasing numbers to follow in 2013.

Henley’s love of music and the joy of “spreading smiles” is what inspired him, along with Radovich and Marx, to assemble People With Instruments. “I love to be able to provide something that makes people happy,” Henley said. His upbringing in music sparked his passion for sharing new artists with the world and lead him to co-start a promotion company BrodiesProductions.

Guests traveling to see the talented artists have the option to camp for $10. Tickets start at $10 for Friday night and $35 for Saturday. For details, to order tickets and the full lineup visit brownpapertickets.com or facebook.com.

Not only is he a multi-media journalist, he is also an accomplished musician. He is the founder of SMI and drives the creative look, feel and branding for the publication. His years of writing, arranging, and performing live music in a variety of genres inform his ability to communicate the message and the mechanics of music. Roth’s work on SMI reflects his philosophy that music is the universal language, and builds community. He believes it has the power to unite people of every race, religion, gender, and persuasion.
Related ItemsAlina ShaninBlake NobleCody Beebe & The CrooksDown NorthLuc & The LovingtonsNorthwest Music FestivalSeattle Music Happenings
← Previous Story New Music Review: Gaytheist – ‘Stealth Beats’
Next Story → Rewind Record Review: ‘A Night At The Opera’ by Queen