Rewind Record Review: ‘A Night At The Opera’ by Queen 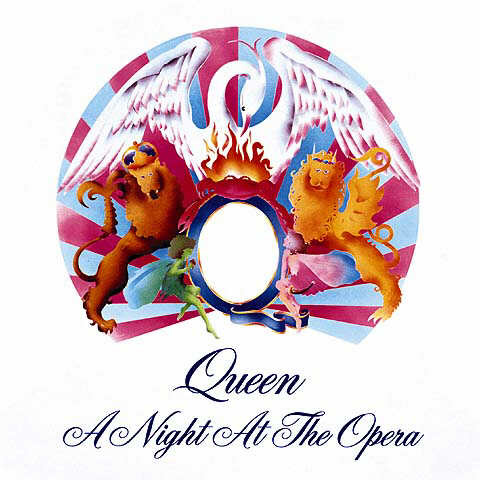 Editor’s note: Truly great music has the power to affect listeners decades later, as demonstrated by SMI’s newest contributor, Harrison Mains. Although Harrison is young, he’s a powerhouse of talent – an accomplished musician, comic, and writer. Please join us in welcoming him as he puts all of those talents to use, showing the download generation that vinyl never goes out of style. – Jennifer Austin

There are bands that employ the spirit of excess in their music. There are bands whose stage manner and themes are excessive. Then there’s Queen, who epitomized, lived, and breathed excess, with a gusto that no one ever has before and hasn’t since. Queen’s masterpiece is a 1975 album called A Night At The Opera, a title taken from the Marx Brothers movie of the same name. It’s a revolutionary album in the realm of layering, mastering, and conceptualism, as well as instrumental quality, songwriting, and the bombastic attitude that is often associated with rock music in the 70’s.

Indeed, every song sounds like it could have been pulled straight from a stage production of some rock-infused theater show, beginning with the first track, Death on Two Legs. It begins with an impressive bit of piano playing, before Brian May’s almost foghorn-like guitar cuts through, and sets a much darker tone for the very dark song. Suddenly, a melody becomes clear, punctuated by some whines of the guitar. The singer of this song is obviously giving a large musical middle finger to someone, even going so far as to suggest they kill themselves. In the middle, the song is stopped by a very theatrical guitar solo that launches right into the second verse, which is just as hostile as the first. Freddie Mercury‘s songwriting seems suited for a musical theater production more than almost any rock musician in history, and Death on Two Legs is just the first of the album’s examples.

The next little ditty, Lazing on a Sunday Afternoon, is a short number that describes a peaceful Sunday, far apart from Mercury’s usual rock persona. It’s a day of personal entertainment as told by an average guy, before being interrupted by another great Brian May guitar solo.

That song then segues into another song that sounds like an early power ballad, written by drummer Roger Taylor, who also sings. It sounds much beefier and more epic than most of the album, as it goes from Journey-esque to Black Sabbath-sounding, to utterly Queen-sounding. I’m in Love With My Car is about as complex as it sounds. It’s about a man who has a real appreciation for his automobile, describing its features, appearance, and feeling, which Van Halen would do again, almost ten years later. A choice moment is when Brian May briefly transforms into Tony Iommi, while Roger Taylor belts out his love for his primary mode of transportation.

The next song is the always classic, You’re My Best Friend, opening with that amazingly bouncy organ riff. One clear highlight is the incredible bass performance by John Deacon, as well as the catchy melody of Deacon’s ode to a girl he loves. Mercury’s vocals are also worthy of note. As he sang his heart, you could always tell what emotion Mercury was feeling, the mark of a truly great vocalist. You can hear all the instruments working as a whole, everything about the song standing out majestically.

The next track sounds a bit like an Irish folk song combined with an old sea shanty, but it was actually written and sung by Brian May, that tells a woman from the perspective of a sailor at sea or possibly a space traveler, depending on how one wishes to interpret the lyrics. The song contains the sweet line, “Write your letters in the sand for the day I take your hand/In the land that our grandchildren knew.” You can feel the salty wind blowing in your hair, or the stomps of sailors on a ship’s deck to the beat of this song, making it a masterpiece of atmosphere, as well as a shining moment for Brian May.

The song after was also written, but not sung, by Brian May. Sweet Lady is about a couple arguing, accusing each other of wrongful treatment, shouting, feeding lines, patronizing, etc. It sounds a bit like a cross between Rush and The Rolling Stones, having a certain steadiness and meaning, while not sparing on a hefty dose of classic rock swagger. The song rushes into a tempo that’s reminiscent of Guns N’ Roses’ song, Paradise City, led with dueling guitar solos into the fade.

The last song on side one is a charming number called Seaside Rendezvous. The song includes a line sung in French, this song could have been pulled from a 1930’s musical, helping the tone of the album’s concept. Describing how to spend the day with a loved one, the song stomps, claps, and tap-dances its way down the streets of Paris, fountains splashing merrily against the clear, blue sky. Or at least, that’s what the song implies.

Side two opens with the fairly long The Prophet’s Song. This eight-minute epic starts quietly, but launches into a tale of an unknown seer, becoming what can only be described as early power-metal, as Queen seems to be almost in the same boat as Rainbow (the original band of such rock legends as Richie Blackmore and Ronnie James Dio). At one point, there is an a capella portion, featuring overdubs of the band’s various members, before launching back into the hard rock sound, eventually leading into a blistering guitar solo from May. With a chorus of Freddie Mercurys belting this story out, it’s hard not to feel compelled by the undeniable beauty, power, and as Jack Black would say, “rocket sauce.”

The album continues by segueing into a heartbreak ballad called Love of My Life. With Mercury still overdubbing himself an angelic chorus, the songs needs little more than a piano and Brian May’s harp (and a little bit of electric guitar to punctuate the melody), until the bass briefly comes in, to introduce a guitar solo that duels with more impressive piano, a cymbal crashing here and there. Leading out with the chorus of Mercurys and a bit more harp, this beauty is worth a listen.

The next song is another Brian May tune, Good Company, in which he plays guitar, ukelele, orchestrates a jazz band, and sings. It’s seemingly a more driven take on Paul McCartney’s famous “jingly” style, putting his own spin on it, as it blends seamlessly with the style of white vocal groups from the 40’s – a sort of Barber Shop-esque style, if you will. The song ends rather abruptly, providing a few second of flute before unveiling the final song, and it’s a doozy.

The famous a capella opening is an iconic introduction to a mysterious world that Freddie Mercury created, like the sound of trumpets over the horizon, as a warning for all to be prepared. Those who don’t know all the words can still sing along to the opening lines, “Is this the real life? Is this just fantasy? Caught in a landslide, no escape from reality/Open your eyes, look up to the skies and see…” The overdub chorus fades in and then sharply pulls back in volume as Mercury stands alone, belting, “I’m just a poor boy, I need no sympathy.” A verse goes by before the drums kick in, and we’re past the point of no return. As Mercury laments, “I don’t wanna die/I sometimes wish I’d never been born at all,” Brian May comes in with one of his greatest guitar solos, that when picked apart, sounds just similar enough to the melody to be under-appreciated for its expert craftsmanship. The song then shifts into silence, save one piano chord played over and over, before Mercury goes into what many consider to be the “weird part” of the song, proclaiming, “I see a little silhouetto of a man/Scaramouch, scaramouch, will you do the Fandango?” The song then kicks into overdrive as an entire army of Freddie Mercurys cries, “Thunderbolts and lightning, very very frightening me!” A falsetto and a deep boom can be heard, as the “Gallileo” bit demonstrates Mercury’s incredible range. The voices become divided, arguing violently, “Bismillah! We will not let you go!” “Let him go!” The build-up increases slowly, before shooting out of that section like a rocket, into some heavy, slamming guitar riffs, the chunkiness helped by Brian May’s use of an English Sixpence for a pick. The section continues, slowing down, but still not losing momentum, just backing it up until it explodes into the last part, coming to a dreamy conclusion, as Mercury reasons, “Nothing really matters, anyone can see, nothing really matters, nothing really matters to me.” The piano drives the song to a close, guitar sliding lazily behind, while Mercury gets the last word, saying, “Any way the wind blows…” before the cymbals bring this monster of a rock song, as well as this masterpiece of an album, to a full and complete stop.

Hendrix did his own unique version of The Star Spangled Banner. Queen ends A Night at The Opera with a very spirited arrangement of God Save The Queen, which highlights some May’s incredible guit

Queen redefined rock and roll attitude, and their legacy is epitomized in this album, a rather eclectic and evolutionary approach to rock as a whole. Incorporating themes of musicals from the stage and screen, folk vibes, raw power, and altogether eccentricity, Queen will stand the test of time as one of rocks biggest musical acts, in every sense of the word.

Not only is he a multi-media journalist, he is also an accomplished musician. He is the founder of SMI and drives the creative look, feel and branding for the publication. His years of writing, arranging, and performing live music in a variety of genres inform his ability to communicate the message and the mechanics of music. Roth’s work on SMI reflects his philosophy that music is the universal language, and builds community. He believes it has the power to unite people of every race, religion, gender, and persuasion.
Related ItemsA Night at The OperaHarrison MainsMusic ReviewsQueenRewind Record Reviews
← Previous Story Live Review: Jack White easy to hear but hard to see at WaMu
Next Story → Summer Meltdown 2012: A look back (Photo Slideshow)