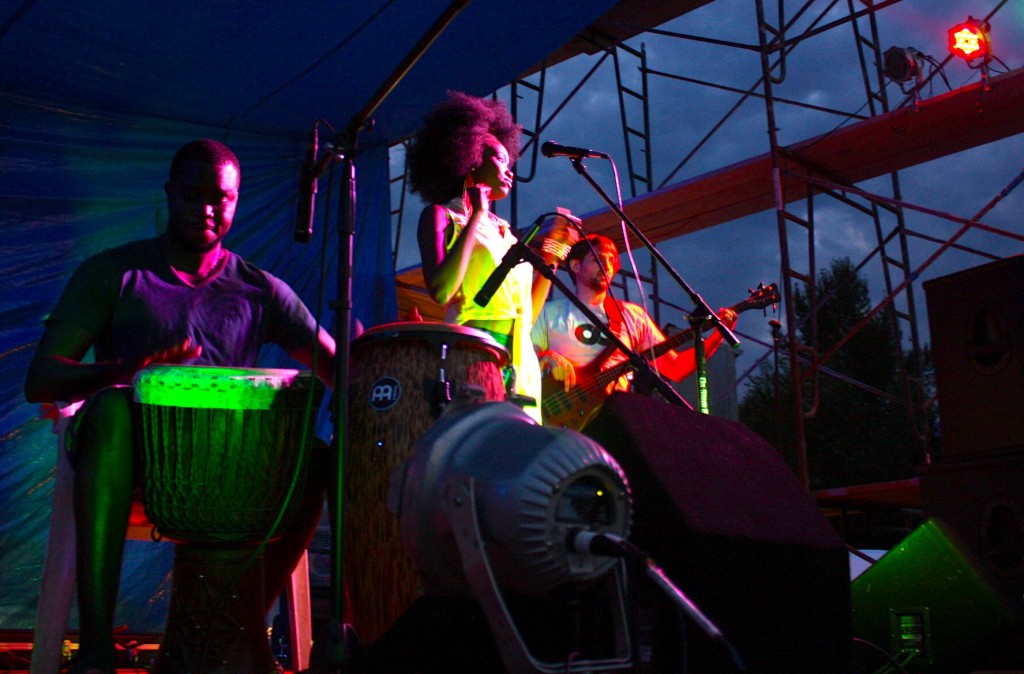 All Photos By Alina Shanin

The first ever People With Instruments (PWI) Music Festival started a tradition last weekend that will bring lots of joy to many for years to come. All of the hard work on behalf of performers, organizers, and technicians paid off Saturday, with about 14 hours of music in Cook’s Farm fields in Carnation. At one point, Morgan Henley (one of three founders) got the audience to chant “PWI” and erupt in applause, in celebration of music, community, and summer time.

PEOPLE WITH INSTRUMENTS MUSIC FESTIVAL KICKS OFF THIS WEEKEND

Although the show started out a little slow, the crowd grew throughout the day, showing support to the artists who gathered from different parts of the state to share a good time.

Magic Mirrors opened the main stage, starting out with a few mellow tunes, gradually bringing up the energy with some upbeat songs that received a positive reaction from the lounging listeners.

The Defeyes took the stage after Magic Mirrors, drawing in the small audience closer to the stage and getting some to dance. This group’s reggae riffs and catchy lyrics picked up the mood, setting a standard for the rest of the day. The Defeyes played a few familiar tunes for the long-time fans and also introduced a couple new songs to mix it up and get the crowd moving. Before finishing the set with “The 420 Song,” keyboardist James Dobbe picked up an electric guitar and took over the lead vocals in a cover of Modest Mouse’s The Cockroach.

After The Defeyes wrapped up their set, Lost Things continued the show on the second stage, located a short walk away from the main field behind a hill that made for a great sitting area. This duo kept it simple with an acoustic guitar, bass drum and tambourine (the latter two played by the incredible singer). The gentle flow of the music complimented the beautiful vocals that carried each and every song the Lost Things played. Like almost everyone else to follow, this band belonged on the main stage with a larger audience.

Luc & the Lovingtons rocked the main stage third sharing some great harmonies of dueling vocalists who also showed the crowd some choreography during the first song. The upbeat songs were hard not to dance to, especially with all five members grooving to the fun acoustic and electric guitar riffs.

Alex Rasmussen shared some of his creations on the second stage as the sun was beginning to set. Adam Gentry and Aaron Brouliette joined him on hand drums, egg shaker and guitar (used as a drum) for a few songs, adding drive and flavor to the bluesy rock songs. For one of the strictly musical songs, hip hop artist Trey grabbed the mic and free-styled as the trio rocked on, showing just how innovative and spontaneous the Northwest music scene is. Rasmussen’s performance was engaging, getting the crowd to clap along to his originals, and even trying out Long Road for the first time with the percussionists. The crowd demanded more after the set wrapped up, so Rasmussen entertained with a cover of Red Hot Chili Pepper’s Snow.

Back on the main stage, Down North‘s funky tunes and always high energy got a few smiles and dance moves from the growing audience. Anthony Briscoe’s ability to engage listeners is always impressive, not only through his vocals, but also through his Michael Jackson-esque moves, including the moon walk. Brandon Storms’ killer bass lines and Conrad Real’s impressive drumming could only be matched by Nick Quiller’s quick and creative guitar solos. Down North classics like Stupid Man and Ride Me carried all the way to the second stage, spreading the love and sending good vibes to everyone.

While every one of the performers deserves some recognition, there were definitely a few who stood out. Blake Noble, who performed on the second stage, blew everyone away with unconventional chord progressions on a 12-string guitar while simultaneously playing the didjeridoo. His quick strumming and drumming on the guitar resembled a style made popular by Rodrigo y Gabriela and the low vibrations of the didjeridoo echoed through the open field. Noble deserves to be heard by many, and those who failed to make the trip away from the first stage definitely missed out.

Project Lionheart kept the party going with more funk as the sun was setting on the warm evening. The mix of hip hop, upbeat percussion, keys, and driving bass lines spread the enticing energy all over the field and stage. Caleb Cunningham’s ability to operate a full drum set while rapping the quick lyrics impressed everyone, adding another level of talent to the Seattle group that’s been leaving its mark on the region.

Cody Beebe & The Crooks warmed up the stage for Austin Jenckes and Floater with classic rock ‘n’ roll songs that echoed throughout the dark field. The band played a few slower ballads, relaxing the audience and having a great time on stage.

As time went on, little difficulties added up delaying Floater’s set until about 2 a.m. instead of 11 p.m. Those who stuck around enjoyed the eccentric rock tunes that most waited the entire day to hear.

Like any newborn festival, there are a few kinks to work out, but PWI is definitely on its way. Morgan Henley is already thinking of ways to improve the event, including moving the second stage closer to the main field in order to make the commute easier for the listeners and allow all performers to enjoy larger crowds.

Definitely add People With Instruments to your festival schedule for next year!

Not only is he a multi-media journalist, he is also an accomplished musician. He is the founder of SMI and drives the creative look, feel and branding for the publication. His years of writing, arranging, and performing live music in a variety of genres inform his ability to communicate the message and the mechanics of music. Roth’s work on SMI reflects his philosophy that music is the universal language, and builds community. He believes it has the power to unite people of every race, religion, gender, and persuasion.
Related ItemsBlake NobleCody Beebe & The CrooksDown NorthLuc & The LovingtonsMagic MirrorsPeople With InstrumentsSeattle Music Happenings
← Previous Story Allen Stone shines bright on Easy Street (Photo Slideshow)
Next Story → Rewind Record Review: ‘Swordfishtrombones’ by Tom Waits