Live Review: Glen Hansard takes it to the streets of Seattle

By Alicia Kamenick on October 6, 2012@corianderstem 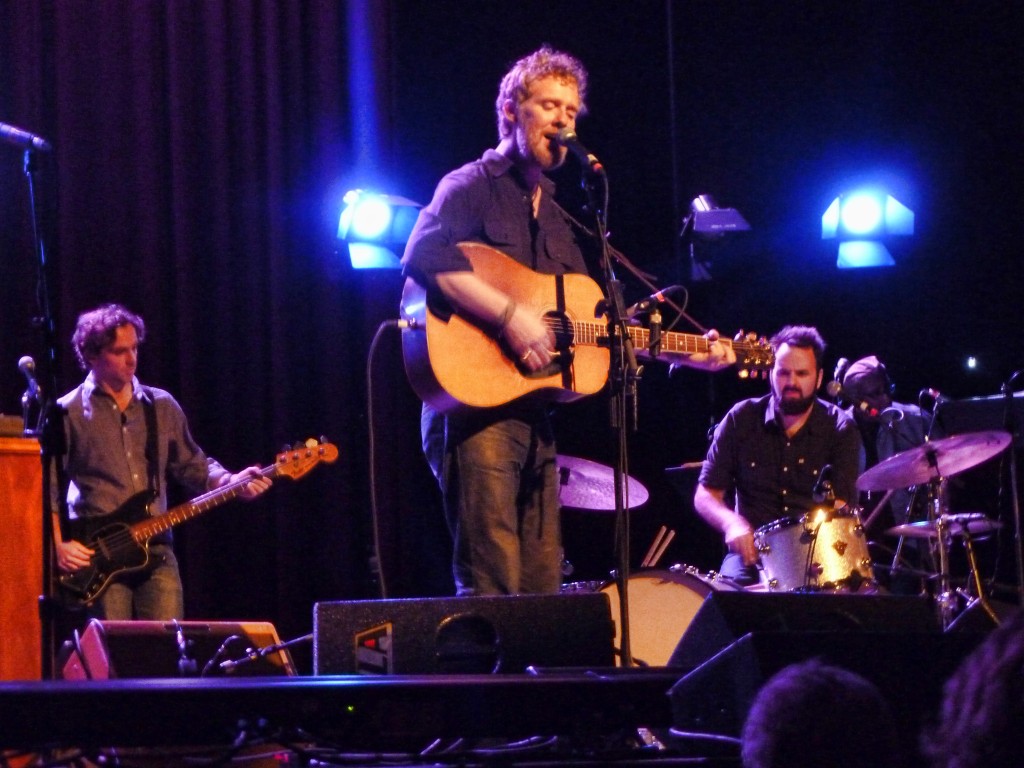 Glen Hansard at The Moore (Phtoto by Alicia Kamenick)

If you’re going to shout something to Glen Hansard during a show, please enunciate, because if he mishears your pithy remark as heckling, it might get awkward … until he realizes his mistake, and then he’ll feel pretty embarrassed about it and dedicate a song to you.

Thus was the fate of a man named Jeff, who suggested Hansard move here after the singer pronounced it a beautiful day. I have no idea what he thought Jeff had shouted, but thankfully one of the other band members stepped in with the correction.

Hansard was warm and witty throughout Wednesday night’s show at The Moore, telling stories and exchanging friendly banter with the crowd.  Near the end of the show, he invited the members of the upper balcony down to the front, and those closest to the exits must have flown down the stairs, as the aisles and stage were filled with people within a minute.

The Moore is an intimate theater to begin with, but that gesture made it feel like we were in a tiny room, watching and listening in rapt attention to Hansard and his band (members of his original Irish band The Frames, plus additional musicians on strings and horns).

The musicians were masterful, and included a local musician filling in on various horns with ease. Throughout the set the configuration changed as they shifted from full-band songs, to Hansard on his own, or with violinist Colm Mac Con Iomaire.

I only became familiar with Hansard from the movie Once, so I knew those songs, and those from Hansard’s recent solo album Rhythm and Repose. But I came out of the show determined to buy every album by The Frames as soon as possible.  Of the full band songs, the breathtaking Star Star and Fitzcarraldo were highlights.

Hansard performed a few solo songs with his old guitar, a beloved relic from his days as a busker in Dublin, the guitar instantly recognizable by the hole worn through its top by years of playing.  For the encore, he came out on his own again, this time standing at the very front of the stage, singing Say It To Me Now without need of a microphone and then joined by Mac Con Iomaire for the beautiful Gold.

Irish openers The Lost Brothers came out for one more song (backed by everyone else), and then it was on to the final encore, a cover of Passing Through, a song previously covered by both Pete Seeger and Leonard Cohen.  The audience quickly picked up on the chorus and sang along, and then Hansard led the band up the aisle and out the door like a New Orleans Dixieland procession.

But the show didn’t end there – a crowd quickly gathered outside as the band stood in the middle of the street and continued the song, ending the evening with a final sing-along and an unexpected extra bit of shared musical joy.

Alicia is a Midwest transplant who loves Seattle but misses thunderstorms. Her musical obsessions began when her coolest aunt gave her a copy of K-Tel’s Rock 80 album for Christmas when she was 7. She spent many years studying piano and voice, but the force of rock and roll won, so while she still sings in a local chorale, her true musical passions lie more with The Beatles than with Beethoven. When she’s not working at her job in HR, she can be found singing bad pop songs at the top of her lungs … although sometimes she does that
Related ItemsAlicia KamenickGlen HansardSeattle Live MusicSeattle Music HappeningsThe FramesThe Moore Theatre
← Previous Story Live Review: Madonna brings religion, sex n’ violence to Key Arena (Photo Slideshow)
Next Story → New Music Review: Marc Johnson ‘Swept Away’ on ECM