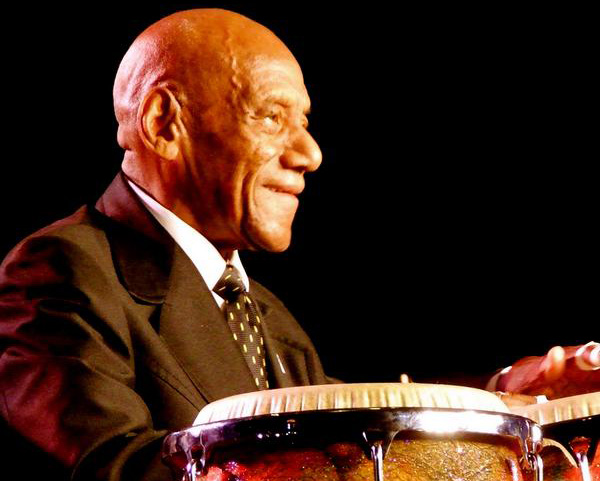 This week Seattle had the distinct pleasure of hosting one of music’s most beloved treasures, Candido (short for Cándido de Guerra Camero), otherwise known as the father of modern conga drumming.  Celebrating 91 years, Candido has appeared on more than a thousand albums, making him the most recorded conga drummer in the history of music.

He is widely known for introducing the concept of tuning congas to specific pitches, showcasing a unique balance of coordination and independence in order to create melodies, many of which are conceptualized and integrated in such a way that they become equally supported by multiple layers of rhythm.

The atmosphere surrounding the event at Dimitriou’s Jazz Alley was more like an invitation to an intimate birthday bash, and within the contents of the envelope a roundtrip ticket granted passage back to the birth of Afro-Cuban jazz.  After drummer Steve Berrios introduced the all-star band made up of renowned artists from multiple eras and generations of the Latin tradition, Candido went on to address the audience like a true ambassador.

While sharing the story of his last visit, which included playing Seattle’s civic auditorium in 1953 as part of Stan Kenton’s band, he pledged, “My friends – Let this not be the last time I play for you!” Not only did he make good on that promise, but pledged a second time, declaring his every intention to return again in 2013.

The evening’s set featured titles that have each in their own way made history, including highlights “Caravan”, as originally heard on Dizzy Gillespie’s Afro (Verve), and “Manteca”, a showstopper that at one time found Candido soloing in the limelight with Charlie Parker, Dizzy Gillespie, and Stan Kenton sharing the bill.

On this particular occasion, “Caravan” brought a touch of Bird and Diz to an arrangement which quoted “Salt Peanuts”, culminating with Candido’s solo spot – a charming vignette that played out like percussive poetry.  Guest vocalist Frankie “Mr. Estilo” Figueroa was on hand for a couple of numbers, decidedly stylized in his approach, and bringing a brand of gusto and boisterous humor that practically had everyone thinking he had just crashed a wedding.

Master timbalist Pete Escovedo (father to virtuoso drummer, Sheila E.), whose regal smile radiated while taking time to lead Candido on and off the stage, gracefully framed the wealth of rhythm that was on display, blending seamlessly with the drums of Steve Berrios, and often alternated with bongos to astutely lend additional treatment to the sound.  Larry Harlow made a fine impression as well, holding down the piano chair with flamboyant melodic phrases that acted as a dancing partner to the rhythm section, which in the context of a trio was frequently enhanced by cascading figures that speak directly to the Latin approach of embracing open and colorful harmonic textures.

Yunior Terry, the youngest son from one of Cuba’s most prestigious musical families, Los Terry’s, offered up a captivating performance defined largely by a tone so deep and warm that its wingspan seemed to extend across the entire stage.  He infused into his solos a Cuban dialect which favors form and composition, as every note was underscored by the feel of a percussionist, and enunciated in a very similar fashion to Candido.

The conclusion of the set was commemorated by an ovation that reflected many times over the respect and affection Candido brings to his art, a man who will forever shine as a touchstone between two countries that succeeded in leaving an indelible mark upon the most significant musical advancements of the last century

Not only is he a multi-media journalist, he is also an accomplished musician. He is the founder of SMI and drives the creative look, feel and branding for the publication. His years of writing, arranging, and performing live music in a variety of genres inform his ability to communicate the message and the mechanics of music. Roth’s work on SMI reflects his philosophy that music is the universal language, and builds community. He believes it has the power to unite people of every race, religion, gender, and persuasion.
Related ItemsCandidoDimitriou' s Jazz AlleyJazzPete EscovidoSeattle Live MusicSeattle Music Happenings
← Previous Story City Arts Fest 2012: A Fine Frenzy, Joshua Radin & Lucy Schwartz (Photo Slideshow)
Next Story → Seattle Living Room Shows and Melodic Caring Project’s October surprise (Photo Slideshow)