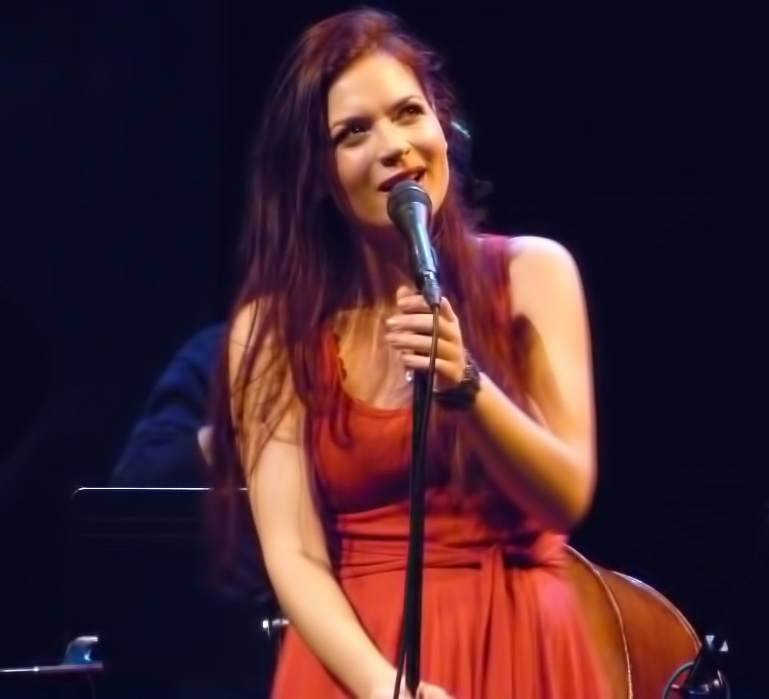 One of the brightest highlights from this year’s Earshot Jazz Festival also marks an historic occasion for Albanian vocalist Elina Duni, who arrived in Seattle last week to perform her first ever concert in the United States at the Cornish College of the Arts.  After striking an enthusiastic chord in France, Germany, and Switzerland with two albums that promptly led to increased visibility through the lens of major European festival appearances, Elina now widens her field to North America, and with a tour that coincides with her quartet’s ECM debut, entitled Matanë Malit (Beyond the Mountain).

The new album could be described as an aural adaptation of poetry, telling in an alluring and highly personable manner about the beauty and turmoil surrounding Albania, and everything congeals to exhibit a freshly inspired approach to the musical traditions and techniques steeped in Balkan folklore.   When drawing upon her roots, Elina’s fire is further stoked by a remarkable talent for articulating in her native language the subtlety and emotion behind every line of prose, unveiled with a raw and almost bewitching power.  The quality of her instrument carries a mysterious beauty that gazes outwardly at the audience, conjuring the faces of haunted memories that somehow find themselves hermetically sealed into every chosen note.  As an album, Matanë Malit paints a poignantly fragrant fresco of love, exile, and socialist themes largely suppressed by the Communist regime that was still in power at the time of Elina’s birth in 1981. 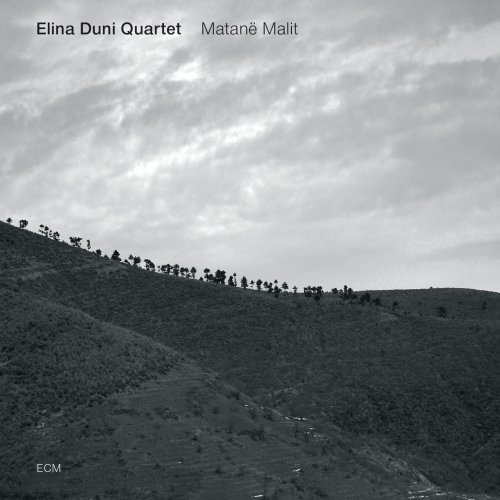 The band was spawned from an association that began as a duo in 2004 with pianist Colin Vallon, and until that time Elina had very little connection with the musical heritage of her homeland.  Out of this seed sprung the will to prodigiously design and piece together a foundation that would be built around the voice, later manifest in a group with the ability to change the direction of any given song instantly by yielding to the mood that seeps from within the lyric.  The balance of the quartet was cast while Elina attended the University of the Arts in Bern Switzerland, and still driven today by the rhythm section of bassist Patrice Moret and drummer Norbert Pfammatter.  Patrice suddenly became unavailable before the start of the North American tour, prompting a call for Brooklyn-based musician Adam Hopkins to step in.  He fills the bass role beautifully, having had only a single day of physical rehearsal in Seattle prior to the quartet’s first performance.

The evening’s set was tailored to the new release, though also introduced core repertoire as a kind of ongoing narrative to mark time in the ritual of performance.  Arrangements flowing from the mind and meticulous hand of Elina act as living, transitory organisms that when filtered through this group seemed to naturally take on a jazz culture.  The ensemble’s greatest strength lies in dynamics, so elastic that even the thinnest fiber dividing sound and silence can suspend itself with ease on the edge of a pin.

From the opening song, entitled “Çobankat (The Shepherdesses),” dynamics immediately became evident through sparsely prepared piano treatments involving muted notes matched to the short decay of Norbert’s woodblocks and metals.  The effect precipitated a series of tiny openings over Adam’s hypnotic bass vamp, creating tension alongside the gathering storm invoked by Elina’s long, sustained vocal lines.  At its root, “Çobankat” speaks to the struggle of the shepherdess in Southern Albania as she seeks independence from the shadow of futility that belies tradition.  The musical adaptation embodies an inner strength, proposing a possible future that carries with it the seeds of hope and liberation.

A synthesis of medieval and contemporary sounds come to light in “U rrit vasha (The girl has grown up),” a famous wedding song from Kosovo.  By Elina’s account, “A wedding is very important in Albania, Kosovo, and the Balkans.  Whenever I was at a wedding we all used to eat a lot, and dance a lot, and drink a lot.  Everything is a lot!”  The effervescence of Norbert’s drums ricocheted throughout the room with bright, open sonorities, pumping out dance rhythms while utilizing a range of cowbells to encircle Adam’s rollicking bass pedal tones.  The phenomenal concentration of energy and rhythm lent equal support to the piano solo, climaxing as a convergence of modal excursions that reach a joyful conclusion with the vocal melody.

“Vajzë e valëve (Girl of the Waves)” remains a staple in the set, a lament from southern Albania that resides at the very the heart of Elina’s upbringing.  Traditionally sung by her paternal grandparents at family gatherings, the song recalls a time when men would marry and then exit the country in search of a better life, posing the risk of exile or even death.  In performance, the poem’s images comes to life and evolve to become one and the same with the breath.  The words synchronize themselves to the sound of a woman’s voice caught in the wind, whipping back over the rocks on the sea and symbolizing a call that may forever go unanswered.

This impressive use of imagery was repeatedly demonstrated throughout the entire program, often with specific attention from the piano, and came in the way of bowed strings and a balloon that when properly placed, acts upon the wires to yield a potent and steely reduction of timbre.  The drums echo the inflection and react as a primeval form of sonic entropy, exploiting metallic elements in whispers and groans, and cutting through the room with a barrage of wooden clattering and coloration. 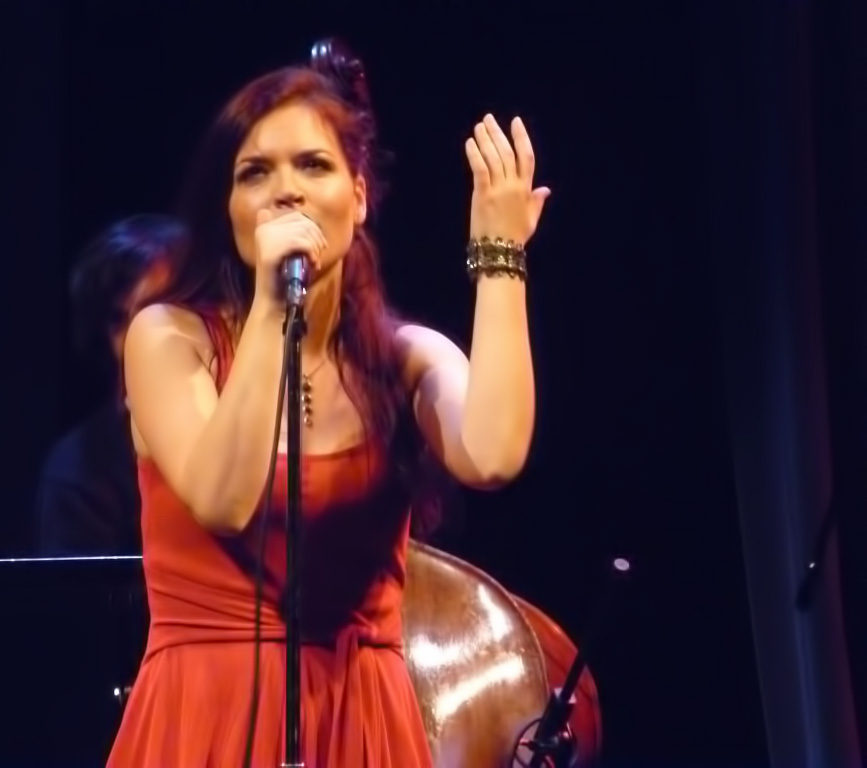 As heard on previous tours, “Kaval Sviri” makes for a fitting finale – a traditional Balkan melody that speaks of the universal power which comes from pure joy and young love.  Elina’s vocal line weaves its way around a theme in 5/8, expanding with intensity and then dissolving into an extended piano solo that steadily builds in dirge-like fashion.  With hardly a moment’s pause, a door opens to find the band leaping in unison from a seemingly indomitable peak, falling back into the melody with grace and supported by an enthralling progression of the Euro-jazz persuasion, reminiscent of early ECM works by Jan Gabrarek and Arild Andersen.

With a handful of dates that lead to New York, and then back to Switzerland in late November, Elina Duni and her quartet will continue to enchant audiences at every point along the map, providing for many their first opportunity to become acquainted with the profoundly exquisite beauty of her homeland.

For a schedule of shows, visit:

Not only is he a multi-media journalist, he is also an accomplished musician. He is the founder of SMI and drives the creative look, feel and branding for the publication. His years of writing, arranging, and performing live music in a variety of genres inform his ability to communicate the message and the mechanics of music. Roth’s work on SMI reflects his philosophy that music is the universal language, and builds community. He believes it has the power to unite people of every race, religion, gender, and persuasion.
Related ItemsAdam HopkinsArild AndersenCornish College of the ArtsECMElina DuniJan GarbarekJonathan SindelmanNorbert PfammatterPatrice MoretSeattle Music Happenings
← Previous Story SMI Radio Xtra: Sounders FC’s Steve Zakuani stages music benefit
Next Story → SMI Radio Ep. 72 On Demand: Mycle Wastman & Matt Brown (Photo Slideshow)