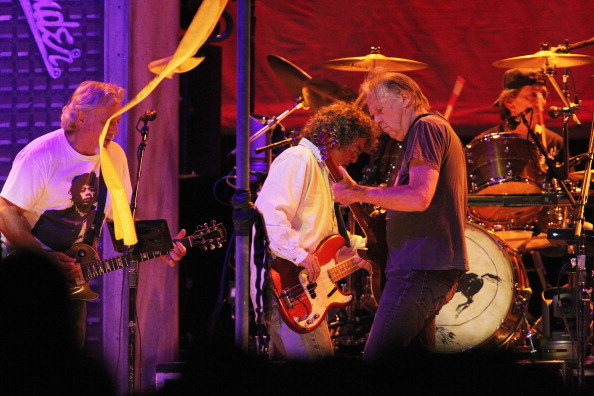 Los Lobos had left the stage, my legs were already tired, I had a whole soda in me, and the sweet smell of legalization was filling the Key Arena. I was standing in the crowd, waiting for my hero to arrive. As the roadies (all strangely dressed as scientists and construction workers) finished tuning and sound-checking, they turned around to the enormous, cartoonish road cases and began to raise them up, The Beatles’ A Day in the Life playing through the speakers.

What they revealed was an equally cartoonish quartet of giant Fender speakers, while at the same time, a giant foam microphone was lowered from the rafters. Once it reached the ground, and that famous final chord rang through the auditorium, the background cloth dropped to reveal a large American flag. The man himself, the great Neil Young, came out from behind the speakers, accompanied by his band Crazy Horse, as they began the concert proper with the national anthem. Once that was over with, the flag dropped as the cloth before it had, to reveal a large Crazy Horse emblem, and with that, the band tore into Love and Only Love.

It became clear why there were large props taking up most of the stage – because during the jam, the band rarely left a small square of space, and as they ripped the song apart, it was clear that these boys didn’t care about anything except playing their guitars. Young’s guitar playing is as distinctive as his voice or his lyrics, and his stage presence during solos gives one the impression that he might be having some sort of epileptic seizure (which may or may not be in bad taste, as Young actually does suffer from epilepsy).

The way he could play small solos between singing lines, and still have ideas of what to play, and the things he was playing, were all evidence of Young’s astounding and lasting talent. After the long jam, the band started up a shorter, but still considerably long version of Powderfinger, from the album Rust Never Sleeps, proving that not only has Young’s voice not deteriorated in the slightest, but he is still one of the kings of the guitar riff.

With a guitar intro, the band started up a song from Young’s latest album with Crazy Horse, Psychedelic Pill, a tune called Born in Ontario, about life being hard, writing songs about life being hard, and getting old, when life starts to become hard. It’s a very good song, and the band played it perfectly. Young sang the song as honestly as any, and played his guitar like he didn’t care who was there. The band liked to end on rather lengthy notes, and as the night went on, Young was giving the impression that he didn’t like ending his songs one bit. The finishes were filled with long sequences of the whole band hitting the same note at the same time, or basically destroying their instruments without actually breaking them. It seemed like the thing only they could get away with.

Speaking of things only they could get away with, the next song was another new one called Walk Like a Giant, a lament about how Young and the musicians of his generation failed to change the world, and the extended guitar solos were worthy of the name. There is nobody on the planet who plays guitar like Neil Young, whose solos may seem broken, but in their lack of fluidity, are beautiful in their simplicity and nuance, much like Young’s lyrics. He plays all the right notes at a pace you’d never expect, that you would never even have thought existed, and he remains captivating while he does so, thrashing about onstage and beating up his instrument as though it was himself he was trying to punish. The jam was ridiculously long, at least twenty minutes, and refused to end for at least three, as the band played the final notes over and over again.

When they had finished, it was time for a short acoustic set, as projections and sound effects simulated a rain storm, and the Crazy Horse flag in the background dropped to reveal the Woodstock logo as Young led a sing-along for The Needle and the Damage Done. After that, he played an unplugged version of another of his new songs, Twisted Road, about the first time he heard Bob Dylan’s crowning musical achievement, Like a Rolling Stone, and listening to The Grateful Dead as he drives down the highway. Finally, as an actress with a guitar case wanders around the stage, Young wanders over to the piano to play Singer Without a Song.

After this was done, Young strapped on his electric again and the band played Ramada Inn, another new song that clocked in at about seventeen minutes on the album, and who knows how long in concert, because Neil Young is Neil Young, and therefore can do whatever he wants. The song is about being in love at an old age, and it’s as beautiful as it is heartbreaking. The last of the night’s femur-shatteringly long jams, Young made it count with his surprisingly energetic performance.

“This is a song I wrote in bed one day…Let’s see if I can remember it,” said Young before tearing into his classic 1969 song Cinnamon Girl. The audience sang and clapped along as Young and the band played the riffs for all they were worth. Said “Weird Al” Yankovic of the song, “The cool thing about [Cinnamon Girl] is that you can play the solo even if you’ve only got one finger and one guitar string,” and the live version was no different. The crowd was very clearly pleased by this fan-favorite. This was followed by another classic, this one from the 90’s, Ragged Glory‘s always elegant, Fuckin’ Up. The boys laughed and yelled as Neil asked the crowd, “Why do I keep fuckin’ up?” As he pointed into the crowd and repeatedly mouthed the word “fuckup,” it was clear he was having the time of his life onstage.

“For this one, we’re gonna have to go way back,” said Young, when the song finished, scraping his pick across his guitar strings to simulate the sound of time-travel, “WAY back. There goes Rockin’ in the Free World…Past Harvest Moon…Heart of Gold, gone…waaaayyyy back…alright, we’re here! Far out! It’s good to be here.” The band then played what many in the crowd recognized to be an old song from Young’s Buffalo Springfield days, Mr. Soul. Even those that didn’t recognize it were happily bouncing along.

Young decided to close the show with one of his most famous songs, Hey Hey, My My (Into the Black). Young’s solos were godly, and he was getting the whole crowd involved. One thing to note is that Young sings the last verse at both the beginning and the end of the song these days. The reason for this is probably that at the time of Kurt Cobain’s suicide, Young had been trying to reach him for days, to tell him to take time to himself, and remember that he didn’t have to do any shows if he didn’t want to, and he was devastated to learn that a line from the first verse of Hey Hey, My My had been quoted in Cobain’s suicide note. The famous line is, “It’s better to burn out than to fade away,” though ironically, there’s another line in the song that states, “Once you’re gone, you can never come back.” He did sing that line, though, and since the incident, he sings that line extra loud.

As an encore, Young decided to come out and play a gut-wrenching version of Tonight’s the Night, from the album of the same name. The album was written after Young had slumped into a depression after the deaths of one of his roadies, and the original guitarist for Crazy Horse, both from heroin overdoses. It was a fitting way to end the night, as it left the whole arena shaken, yet still convinced that whatever Neil Young had that made him one of the greatest musicians in the world, he still has to this day, and there’s no sign of that changing.

Not only is he a multi-media journalist, he is also an accomplished musician. He is the founder of SMI and drives the creative look, feel and branding for the publication. His years of writing, arranging, and performing live music in a variety of genres inform his ability to communicate the message and the mechanics of music. Roth’s work on SMI reflects his philosophy that music is the universal language, and builds community. He believes it has the power to unite people of every race, religion, gender, and persuasion.
Related ItemsHarrison MainsKey ArenaLos LobosNeil YoungSeattle Music Happenings
← Previous Story The Sea and Cake Rock the Croc with a little help from The Purrs
Next Story → Seattle’s Daydream Vacation drops new single