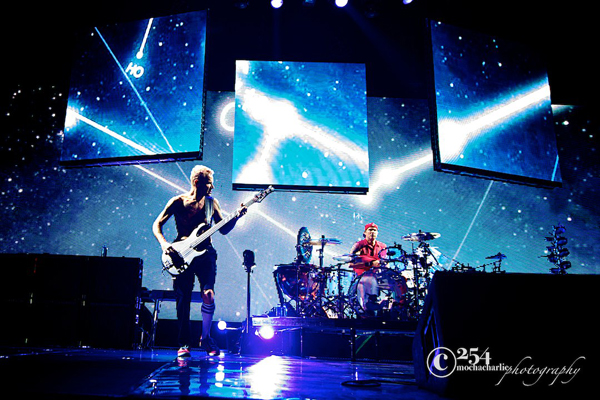 Red Hot Chili Peppers brought it to the stage Thursday night at The Key Arena… And the crowd LOVED IT.” Fans enjoyed a high energy performance and sounds that recalled the RHCP’s of the 90’s.The band mixed up their set with hits from their complete discography, which spans over three decades, including their latest release, I’m With You.

As expected, bassist Michael “Flea” Balzary, vocalist Anthony Kiedis, and Josh Klinghoffer (the sixth guitarist to join the band since their inception) provided boundless hyper-kinetic energy all over the stage, while Chad Smith held it all down with his powerful, in-the-pocket drumming.

Having not played any string of shows since 2007, their I’m With You tour, which began with promotional shows in late 2011, was supposed to officially begin in Jan ’12, but was delayed due to front-man, Kiedes’ required foot surgery. The tour picked up last March, and based on the singer’s high energy performance last night, it was apparent that Kiedes has not missed a step.

Purchase a live download of the Seattle concert here.

The tour will continue through February 2013, marking their biggest tour to date. All shows from the tour will be made available to purchase as downloads through LiveChiliPeppers.com (http://livechilipeppers.com/).

See photos from the show in the photo slideshow below…

Mocha Charlie is an amazing photographer who has a real passion for music. She covers and shoots several shows per month in and around the region. She a brilliant photo journalist but most importantly, she is also a mother who does her best to balance out her life and live it to the fullest. Mocha Charlie uses her passion and talent to support the community, her friends and family any way that she can.
Related ItemsKey ArenaMocha CharlieRed Hot Chili PeppersSeattle Live MusicSeattle Music Happenings
← Previous Story SMI Radio Ep. 74 On Demand: Brent Amaker and Lukas Nelson (Photos)
Next Story → Chris Robinson’s Brotherhood to hit Neumos this weekend