Legendary drummers Michael Shrieve and Neil Peart go one on one

Anyone who was fortunate enough to attend Woodstock in person, or see the iconic film of the same name, should recall one of the key moments – when a 20-year-old drummer named Michael Shrieve played one of the most brilliant drum solos ever. Shrieve’s solo with Santana during their live performance of Soul Sacrifice will be forever etched in the hearts and memories of music fans.

Shrieve’s stunning work with Santana from 1969 – 1974 also earned him a place in the Rock and Roll Hall of Fame in 1998. Currently, he makes his home in the Pacific Northwest and plays a regular Monday night gig with his jazz and Latin-tinged combo, Spellbinder, at White Rabbit in Fremont.

The drum legend also hosts a radio show, Notes From the Field, every Sunday at 9:00 a.m. (PST) on Jet City Stream. Shrieve has many interesting guests and speaks on an array of topics, but this Sunday’s show (December 2) will be extra-special. Shrieve’s guest is an artist and drummer, who with the likes of Buddy Rich, Gene Krupa, Carl Palmer, and Alan White, has raised the bar for other drummers of all ages. 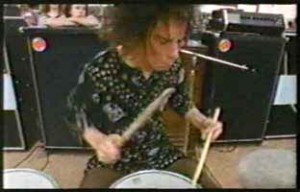 Like Shrieve, Drum Zen-Master Neil Peart is considered one of the greatest and most admired in the world. His work alongside Geddy Lee and Alex Lifeson of Rush has taken the art of drumming and musical pyrotechnics to new heights for over four decades.

The reclusive Peart is averse to doing interviews and press. Lifeson and Lee are happy to take on those duties, with Peart perfectly content to remain out of the limelight. (The band was just in town a few weeks ago to play a show at Key Arena. Read all about it here: YOU NEVER FORGET YOUR FIRST RUSH!) 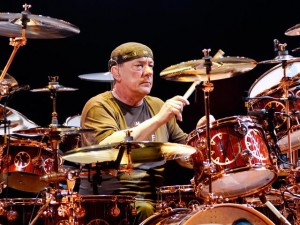 I asked Michael how he was able to land this special interview with an individual who typically shuns these types of affairs. Shrieve reports, “He’s very difficult to get ahold of! I first contacted drummer Terry Bozzio, who put me in touch with Don Lombardi, who is head of Drum Workshop drum company, who all three of us endorse and play, and Don put me in touch with Neil’s drum tech, who then spoke to Neil and from there it was set up. However, Neil’s personal security guy would not allow me to have anyone in the room except myself and my producer who recorded the interview.” The two drummers discuss a lot more than just drumming. “I was so impressed with Neil, and we had a great conversation about music, drums, life, and books!” Shrieve added.

As much as Peart has influenced others, he has been influenced by Shrieve himself. When asked about the influence that Shrieve had on Peart, Shrieve said, “Neil does talk about me influencing him in the interview, which was very flattering. I’ve always had a great amount of respect for Neil Peart, both as a drummer and as a man.” When asked what influence Peart had on Shrieve, he said, “Drumming-wise he wasn’t necessarily an influence on me. However, it seems that every drummer I speak to about him, cites him as a huge influence.”

To say that Michael Shrieve and Neil Peart have stellar pedigrees is truly an understatement. The fact that these two amazing cats are sitting in a room talking to each other about their well-honed craft and other topics is more than compelling. I would have loved to be a fly on the wall for this summit – instead, we get the next best thing… by tuning in at 9:00 a.m. this Sunday morning for Michael Shrieve’s Notes from the Field

If you missed the interview streaming, it will be available here: Jet City Stream.

Not only is he a multi-media journalist, he is also an accomplished musician. He is the founder of SMI and drives the creative look, feel and branding for the publication. His years of writing, arranging, and performing live music in a variety of genres inform his ability to communicate the message and the mechanics of music. Roth’s work on SMI reflects his philosophy that music is the universal language, and builds community. He believes it has the power to unite people of every race, religion, gender, and persuasion.
Related ItemsJet City StreamMichael ShrieveNeal PeartNotes From the EdgeRushSeattle Music Happenings
← Previous Story You never forget your first Rush!
Next Story → ‘The Boss’ pays homage to fallen blood brothers in Portland (Video)