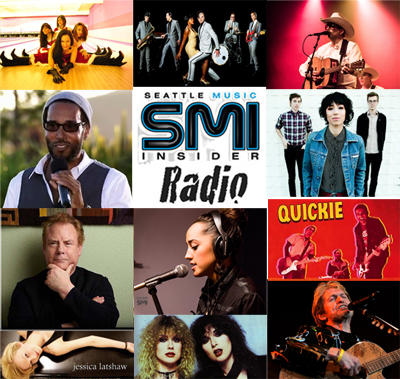 The Pacific Northwest weaves a rich tapestry of eclectic music and art that covers our region like a favorite blanket. We embrace artists from a variety of eras and genres, and we’re better for it.

All year long, we at SMI do our best to feature the best of the Northwest. This includes established and emerging artists, and those who make us fall in love with them as they pass though town.

This week’s episode of SMI Radio features holiday music from artists who have been past guests on the show. It’s like a virtual holiday card that doesn’t clutter up your space or get lost under the bills!

First, Fitz and The Tantrums tear it up. Next, check out the number by harmonica virtuoso Lee Oskar, with lyrics penned by  Michael Shrieve and vocals from R&B singer Ernest Pumphrey Jr. (Marmalade, Phat Sidy Smokehouse, and more). Deep Sea Diver, The HoHoHos, a wonderful Christmas medley from Jessica Latshaw, songs from Brent Amaker and The Rodeo, LeRoy Bell and  Ann and Nancy Wilson (Heart) will deck your halls.

The second half of the show features more Christmas rock from The HoHoHos! – and I chat with Tess Henley. Tess talks about the progress of her new record, which will be released around March – and you can check out her newest holiday single, Christmas Won’t Do Without You (featuring The Passenger String Quartet).

The show is rounded out with a power-pop ditty from Quickie, a smooth tune called This Christmas, written by Michael Shrieve’s talented 22 year old son, Sam Shrieve, and concluded with an uplifting song from the voice of Yes, Jon Anderson.  (Full interview here.)

We at SMI wish you Peace, Love and Music, a merry Christmas, and Happy Holidays to you, your friends and families!

Not only is he a multi-media journalist, he is also an accomplished musician. He is the founder of SMI and drives the creative look, feel and branding for the publication. His years of writing, arranging, and performing live music in a variety of genres inform his ability to communicate the message and the mechanics of music. Roth’s work on SMI reflects his philosophy that music is the universal language, and builds community. He believes it has the power to unite people of every race, religion, gender, and persuasion.
Related ItemsAnn and Nancy WilsonBrent Amaker and The RodeoDeep Sea DiverErnest Pumphrey JrFitz and The TantrumsHeartJessica DobsonLee OskarLeRoy BellMichael ShrieveQuickieSeattle Music HappeningsSMI RadioTess HenleyThe HoHoHo's. Jessica Latshaw
← Previous Story SMI Radio Ep. 77 On Demand: Roger Fisher & Steve Fossen (Heart), Andrew Vait (Eternal Fair) and Julie Mains (The HoHoHos)
Next Story → SMI Radio Ep. 79 On Demand: Ben Union and The Fame Riot (Photo Slideshow)