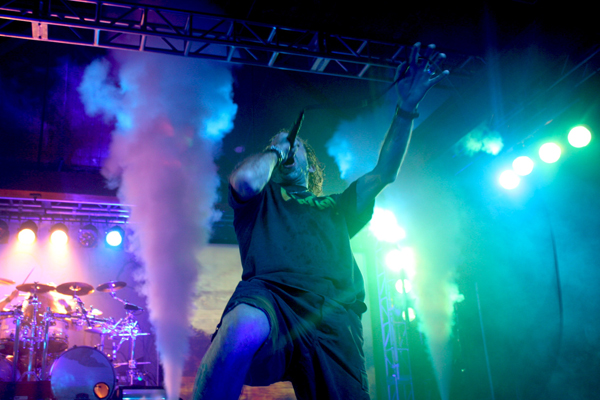 The massive crowd size and a “Sold Out” sign explained the long search for a parking spot near the Showbox SODO last Sunday night. With Lamb of God headlining the stage and In Flames, HELLYEAH, and Sylosis warming it up, every metalhead in Seattle that could get in was there.

Sylosis kicked off the early show with HELLYEAH following shortly and getting the blood of cold attendees pumping.

With sound system checked and audience ready, In Flames took the stage next and absolutely rocked the house. Fans were cheering and singing along to the familiar hits of the Swedish group, while pondering the newer, quicker songs. While some went along with the change and kept on moshing, others screamed out for heavier tunes.

Vocalist Anders Friden encouraged crowd surfing and roughhousing any chance he got, which forced the staff to work extra hard to control the enthused fans.

Many showed their love and support by rocking In Flames gear, but it was clear that the majority was there for Lamb of God.

Before the band stepped foot on stage the fans gave up on waiting and proceeded to chant “Lamb of God! Lamb of God!” until the lights dimmed.

After the intro video, comprised mostly of demolition, the metal kings walked onto the stage and started the insanity right away with Desolation and Ghost Walking, both off the band’s latest album Resolution.

The crowd’s excitement and rowdiness grew with every song. A few stood out more than others, including Walk With Me in Hell,11th Hour and Something to Die For, which was dedicated to the brave U.S. soldiers mid-set.

Vocalist Randy Blythe addressed the crowd during breaks, sincerely thanking the fans for all the support and expressing his happiness for wrapping up the two-month tour in Seattle.

After rocking a few classics like Ruin and Omertà (from Ashes of the Wake, 2004) and starting the first circle pit of the night, Blythe briefly mentioned his current legal troubles concerning the Prague incident of 2010. He expressed gratitude for the present and told the fans to live in the moment and enjoy the now.

As expected, the band brought tons of energy and impressive guitar licks that kept the crowd screaming and surfing to the front. Everything from hats, sweatshirts and shoes were thrown toward the ceiling during the short pauses between mosh pits.

Contractor (Wrath, 2009) definitely raised the bar on energy and gave rockers the go-ahead to bounce around as hard as possible, leaving some with broken glasses and bruises.

After a quick break, Lamb of God came back on stage to the calm guitar harmonies of The Passing which bled into In Your Words and kicked off one of the best finales a fan could ask for.

The floor turned into one big moshpit as Laid to Rest, Redneck and Black Label brought the show to a close. Blythe enjoyed every last moment on stage as his bandmates passed off their instruments to the crew for a quick rock out session to celebrate the ending of this tour.

Everything about the show was absolutely great thanks to all the hard work of many. Both performers and fans seemed to have tons of fun and endless energy that kept that floors shaking from 7 p.m. till midnight. 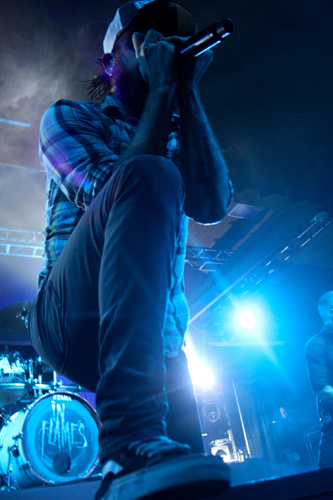 Not only is he a multi-media journalist, he is also an accomplished musician. He is the founder of SMI and drives the creative look, feel and branding for the publication. His years of writing, arranging, and performing live music in a variety of genres inform his ability to communicate the message and the mechanics of music. Roth’s work on SMI reflects his philosophy that music is the universal language, and builds community. He believes it has the power to unite people of every race, religion, gender, and persuasion.
Related ItemsAlina ShaninHELLYEAHIn FlamesLamb of GodRandy BlytheSeattle Music HappeningsShowbox SodoSylosis
← Previous Story The HOHOHOS and NWCZ Radio will rock Rec Room this Saturday
Next Story → SMI New Music Preview: ‘Rotting on the Vine’ by The Purrs