This week’s episode of SMI Radio features two brilliant artists, who each have very powerful and organic sounds, coupled with very strong production and songwriting: Campfire Ok and Kristen Ward.

In the first half of the show, members of Campfire Ok, Michael Mychal Cohen, Brandon Milner, and the band’s newest member, Zarni De Wet (who was on the last episode here) stopped by the SMI Radio studio.

These talented musicians chat up their brand new record, When You Have Arrived, and special show coming up next Saturday night, February 16 and Sunday night February 17th at The Showbox at The Market (on the bill with The Presidents of The United States of America). They share their take on their own unique and eclectic music and their appearance in the documentary, Welcome to Doe Bay.

They also call out another Seattle band, Pickwick, for a throwdown – but it’ is all in good fun!

Campfire Ok recently appeared at  Seattle Living Room /  Melodic Caring Project show. You can read all about it by clicking below.

CAMPFIRE OK RELEASES NEW VIDEO ‘WHEN YOU HAVE ARRIVED’

In the second half of the show, we hit up Kristen Ward on the phone to talk about her stellar performance last Friday at The Triple Door, which featured all of the songs of her most recent record, Last Night On Division.

Read the review and check out photos from the show by clicking the link below. 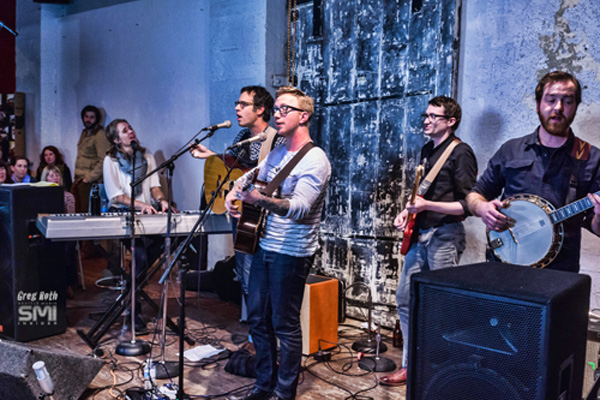 Not only is he a multi-media journalist, he is also an accomplished musician. He is the founder of SMI and drives the creative look, feel and branding for the publication. His years of writing, arranging, and performing live music in a variety of genres inform his ability to communicate the message and the mechanics of music. Roth’s work on SMI reflects his philosophy that music is the universal language, and builds community. He believes it has the power to unite people of every race, religion, gender, and persuasion.
Related ItemsCampfire OkGreg RothSeattle Music HappeningsSMI RadioThe Showbox at The MarketZarni De Wet
← Previous Story Ellie Goulding captivates Showbox Sodo (Photo Slideshow)
Next Story → SMI Artist Spotlight: Tumbleweed Wanderers roll into Nectar Lounge (Audio Interview and Photos)