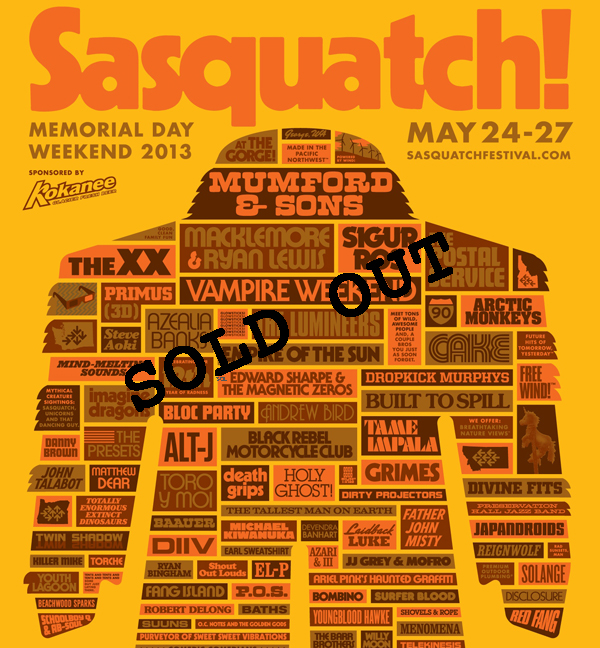 Music fans hoping to attend Sasquatch! 2013 may be out of luck. Earlier today, promoters announced that the event sold out in record time, less than 90 minutes after going on sale.

Earlier this week, the Northwest festival announced its 2013 lineup. The unveiling of the lineup came at Sasquatch’s launch party, which took place Monday night, February 4th, at Seattle’s Neptune Theater. The party featured musical performances from Built To Spill, Cody ChesnuTT and “A Very Special Surprise Guest” who turned out to be Seattle chart topping artist, Macklemore. (See photo slideshow below.)

This year’s festival takes place Memorial Day weekend, May 24 – 27 at the Gorge Amphitheatre and will once again deliver an eclectic mix of local, national, and global artists from a variety of genres.

Some of the notable Northwest acts playing the festival include Reignwolf, Macklemore & Ryan Lewis, Father John Misty, and The Postal Service. 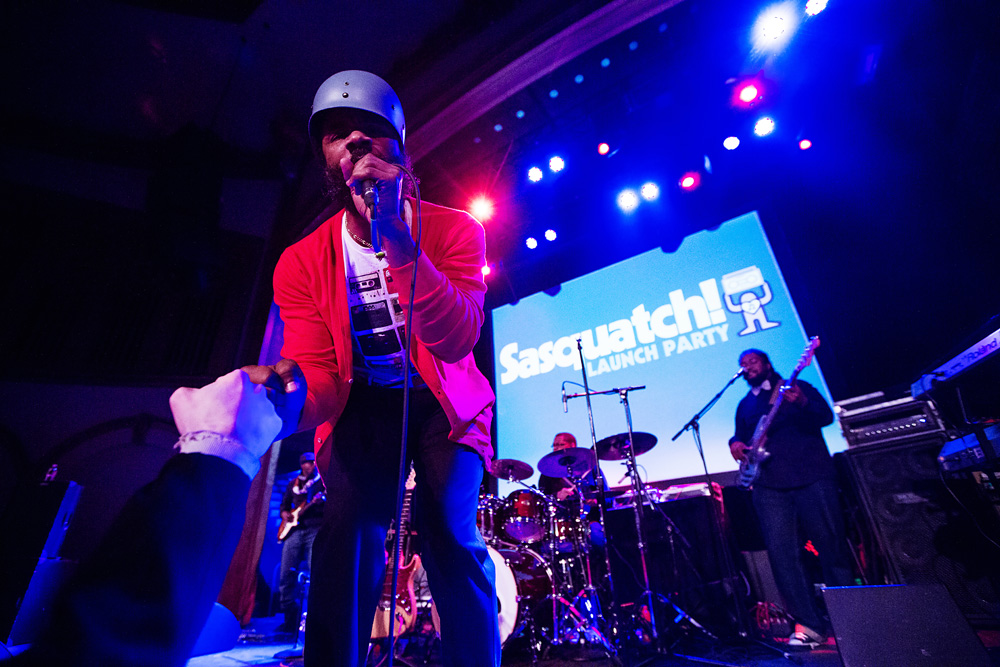 You can access the complete lineup by visiting http://www.sasquatchfestival.com

Festival creator Adam Zacks founded Sasquatch! in 2002 with the aim of building an event that catered to the eclectic tastes of voracious music enthusiasts. Personally programming the lineups for each Sasquatch! Festival, Zacks handpicks a dynamic array of performers with a tradition of presenting critically acclaimed emerging artists alongside established headliners. Sasquatch! has recently been recognized for its programming excellence with a nomination for Festival of the Year at the 2012 Pollstar Awards and was named Festival of the Year in 2010 by Consequence of Sound. Electronic luminary Wolfgang Gartner said of his Sasquatch! experience, “There’s this festival called Sasquatch! out in the middle of Washington once a year. Last night I played it. This is a really bold statement, but I’m’a go ahead and say this was the best gig I have ever played in my life, crowd-wise, vibe-wise, everything-wise…I will never forget it as long as I live. This is the kind of night that makes me realize I would do this sh*t for free.”

Sasquatch! founder Adam Zacks recently shared insight into the festival and his strategy for booking acts in an interview with The AV Club.

Not only is he a multi-media journalist, he is also an accomplished musician. He is the founder of SMI and drives the creative look, feel and branding for the publication. His years of writing, arranging, and performing live music in a variety of genres inform his ability to communicate the message and the mechanics of music. Roth’s work on SMI reflects his philosophy that music is the universal language, and builds community. He believes it has the power to unite people of every race, religion, gender, and persuasion.
Related ItemsFather John MistyMacklemore & Ryan LewisMat HaywardReignWolfSasquatch! Music FestivalSeattle Music HappeningsThe Postal Service
← Previous Story SMI Artist Spotlight: Tumbleweed Wanderers roll into Nectar Lounge (Audio Interview and Photos)
Next Story → Ben Folds Five at Showbox @ The Market: A look back in photos…