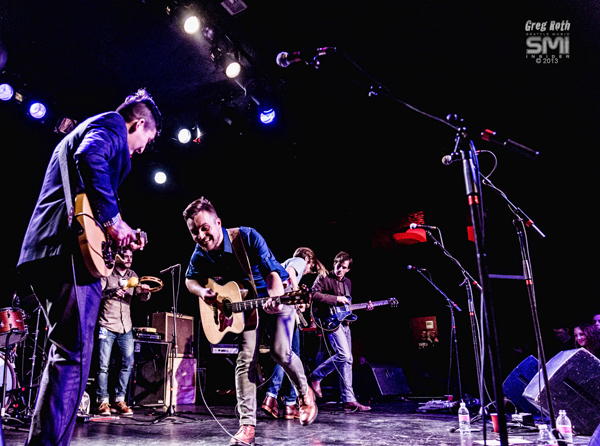 Ivan & Alyosha at Showbox @ The Market (Photo by Greg Roth)

2012 was a stellar year for Seattle music, with artists such as Allen Stone and Macklemore achieving national recognition. 2013 is on track to be a banner year for other Seattle bands, such as Pickwick, Campfire Ok, Deep Sea Diver and Lemolo. After their brilliant performance at Seattle’s Showbox at The Market, it’s clear that Ivan & Alyosha belong on the list of bands about to blow up.

I & A is a band that defies labels. Their celebratory sound incorporates many influences – including Roy Orbison, The Beatles, Simon and Garfunkel, Electric Light Orchestra, Tom Jones, and Harry Belefonte.

An incredible vocal band, Tim Wilson’s unique vibrato and range, along the band’s exquisite harmonies, give them their signature sound. The beautiful twin guitar delivery of Tim Kim and Ryan Carbary, combined with the solid bass work of Tim’s brother Pete, provide a strong instrumental foundation.

The band’s talent was on full display at the Showbox, providing a showcase for their first full length album, All The Times We Had, released on February 26th. The songs are even bigger when performed in front of a live and adoring audience.

Listen to the interview with the band by clicking the link below.

Fans at the sold out event were also treated to solid sets from Smokey Brights and Kris Orlowski. The whole concert was streamed live to children in the hospital by the good folks at Melodic Caring Project.

The concert was also a celebration for Pete Wilson and his wife, who, only hours before, welcomed their first child, Lennon. (That would explain why Wilson was not at the band’s soundcheck.) Thanks to Melodic Caring Project, Lennon was able to hear the concert with his mother.

And, the show was also a celebration for the music community. Several friends and family members were there for the concert, including Tim Wilson’s 2 year old son who donned earphones, and was clearly enjoying seeing his Daddy do his thing. Several artists and past Melodic Caring Project performers such as Damien Jurado, The Local Strangers and Naomi Wachira also came out to lend their support.

Ivan and Alyosha opened with the gospel-tinged number, Glorify, from their debut EP, Fathers Be Kind, followed by the folky, power-pop-flavored Be Your Man, complete with George Harrison-inspired guitar tones.

Later in the set, Tim Wilson gave a shout out to MCP Rockstars Alexa, Caden, Jordan, Zach, Sarah, and Bailey. After that, Andrew Joslyn and the Passenger String Quartet joined them onstage for some numbers which included a lovely version of the title track from I&A’s new record, as well as the spiritually uplifting The Fold.

For the encore, the band was joined by members of Smokey Brights and Kris Orlowski – a perfect end to an all inclusive evening of beautiful music, family bonds and friendship.

After a week of record release activities, Ivan & Alyosha will take a short break before they embark on the first leg or their North American Tour, which starts in Denver Colorado, Friday, Mar. 6 and concludes in Vancouver, Canada in May.

If you were not able to attend the show, you can see the Melodic Caring Project stream on demand here. 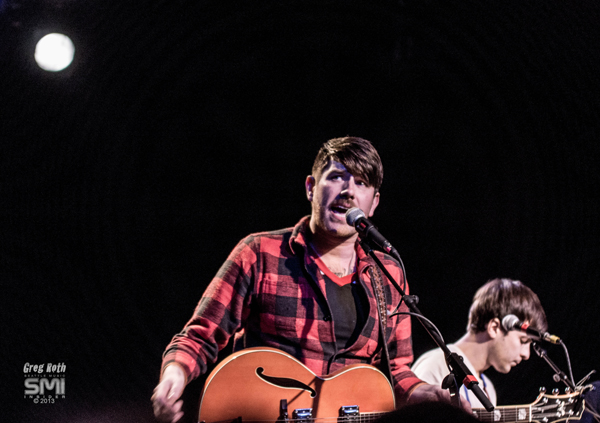 Not only is he a multi-media journalist, he is also an accomplished musician. He is the founder of SMI and drives the creative look, feel and branding for the publication. His years of writing, arranging, and performing live music in a variety of genres inform his ability to communicate the message and the mechanics of music. Roth’s work on SMI reflects his philosophy that music is the universal language, and builds community. He believes it has the power to unite people of every race, religion, gender, and persuasion.
Related ItemsAndrew Joslyn and The Passenger String QuartetIvan & AlyoshaKris OrlowskiSeattle Music HappeningsShowbox at the MarketSmokey Brights
← Previous Story SMI Artists Spotlight: Shane Alexander at El Corazon (Photo Slideshow)
Next Story → SMI Radio Ep. 84 On Demand: Everyday Jones