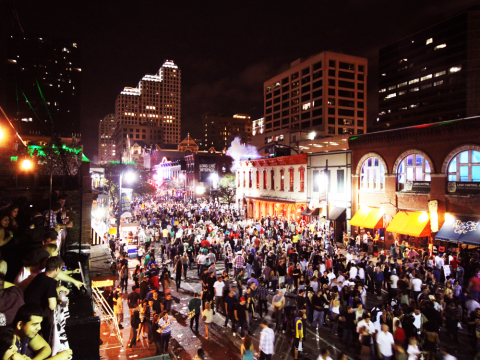 SMI has a new feature called Notes from the Road. Derek Aubert is currently out on the Road with Seattle’s Fox and The Law and shares some tales from his experience touring with the band and SXSW 2013. (Part 2 of 4)

We woke up wearily, grabbed some In-N-Out, then left at noon and drove nearly non-stop to Austin. Every time we got back on the road after a pit stop, Guy would yell, “Kevin!” and laugh hysterically at the rest of the van’s passengers rolling their eyes, as if the humor stemmed from the annoyance it caused, rather than the material it referenced. Nothing really exciting happened today, except when Guy tried to light a cigarette in the car and instead lit his hair on fire.

We rolled into Austin and stashed the gear at a house we rented with some friends, located about a half hour outside of downtown. Before you could say, “I’m gonna hop in the shower,” we were out the door again to hit up Paul, a local former booker the band met last year. Paul lives at his girlfriend’s condo (with his bandmate Higgins sleeping on the couch) and doesn’t have a phone, but knows most of the bookers in East Austin. Paul took us to a few of his favorite spots in the area, which turned out to be a rough cultural equivalent to Capitol Hill (very liberal), located walking distance from the festival area downtown.

A lot of good independent showcases have been sprouting up in East Austin the last few years, so it was a good place for a small-time band to look for shows. Fox and the Law had booked three festival gigs prior to leaving Washington, with all but one canceled by the time we got into town. With Paul’s help, everybody grabbed a stack of Scarlet Fever CDs and hit the venues to hustle for cancelations to fill.

Well, almost everybody did. We stopped at a venue that was giving out free whiskey and I hung back to wait for Allah-Las to go on stage. They played a very mellow set, with one or two songs I hadn’t heard on their album, but whose names escape me due to free whiskey.

The band found two slots to fill tomorrow, both of them at the same venue. Cheers gave FaTL three slots to fill on the understanding that they would play one and then give the other two away. The band gave one to Kithkin and kept the other two, giving the booker an elaborate story about a band called the IUDs who were going to play, but got DUIs and thrown in jail the night before, and how they couldn’t find a replacement.

Last night, Paul told us to get a hold of him by nine this morning so we could get an early start hustling for shows today. We rolled over to his girlfriend’s and knocked on the door at noon, but nobody answered. We got halfway to town when he called us (on Higgins’s phone) saying he’s awake and to come by. He answered the door in his underwear, explaining that he didn’t expect us to come by so soon. When we told him we came by earlier, he explained that that’s what woke him up and that he thought we were the landlord. He had to hide because he and Higgins weren’t on the lease, his girlfriend was at work, and her landlord was [an expletive]. He said it was going to be a while before he got ready, so we left.

Most of the band went ahead to hand out CDs, while Guy and a few friends from a Seattle record label went to Fed Ex-Kinko’s to print out business cards and press releases. After spending almost an hour trying to figure out how to use the self-service printer to print out business cards, it turned out they bought the wrong kind of paper stock. After printing everything out (and ruining a paper cutter by trying to cut too many sheets at once), someone pointed out that both the cards and the one-sheets had massive typos, because nobody bothered to proofread either. The one-sheets got recycled, and all 250 cards got corrected with a sharpie.

After two hours and several strange looks from the staff and patrons, we finally headed downtown and landed another show at 1:00 pm the next day. The band celebrated by taking the rest of the day off and enjoying the cheap drink specials. With day one of the official SXSW Music festival ending in another drunken haze, any hopes of coherency for the next couple of weeks were quickly diminishing.

Not only is he a multi-media journalist, he is also an accomplished musician. He is the founder of SMI and drives the creative look, feel and branding for the publication. His years of writing, arranging, and performing live music in a variety of genres inform his ability to communicate the message and the mechanics of music. Roth’s work on SMI reflects his philosophy that music is the universal language, and builds community. He believes it has the power to unite people of every race, religion, gender, and persuasion.
Related ItemsAllah-LasDerek AubertFox and The LawKitchinNewsSXSWSXSW 2013
← Previous Story SMI Notes from the Road: Spring Tour with Fox and The Law Pt. 1
Next Story → Leo Kottke sells out The Seasons in Yakima (Photo Slideshow)