Home / Reviews / Festivals / SMI Notes From The Road: Fox and The Law at SXSW Pt. 3

SMI Notes From The Road: Fox and The Law at SXSW Pt. 3 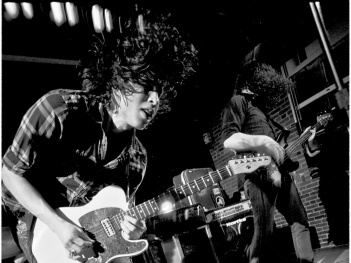 SMI has a new feature called Notes from the Road. Derek Aubert is currently out on the Road with Seattle’s Fox and The Law and shares some tales from his experience touring with the band and SXSW 2013. (Part 4 of 4)

The first show today was at 1:00 pm, with load-in at 12:00, at a spot called the Austin Ale House on 6th Street, about 30 minutes away from where we slept. Due to all the drinking the night before, we woke up just after 11:00. We rushed all of the band’s gear and eight passengers (including our rented-house mates) into the minivan, and took off as fast as we could go. About four blocks later, I got a call from Dan. I turned around in my seat to ask why he was calling me, but he wasn’t in the van. We called him Kevin the rest of the day.

Guy had set the show up yesterday, independently of the band. After briefly mentioning the name of the venue, he disappeared to find a Verizon store. It seems his phone’s battery life had dwindled in the last month, and he picked this precise moment to go off (taking our housemates’ car) and swap his phone for a better one. According to the band, Guy disappears on errands like this all the time, usually when there’s work to be done.

The band had to Google the place to find it. 6th street was closed to motor traffic because of the festival, so bands playing venues on that street had to drive up to 7th and unload in the right lane, which was coned off for them, then haul the gear that extra block back to their venue. By 12:30, we dragged everything to the alley behind the Ale House and banged on the back door till somebody let us in. The place was just opening and the staff didn’t mind we were late, since nobody told them we were coming. We had nearly finished setting up when Guy finally arrived to tell us that we were at the wrong place.

By now it was already one o’clock. A helpful staff member informed us that this isn’t the first time someone got the two establishments confused. He gave us the correct address and Guy rushed ahead to smooth things over with the booker at the correct venue, while we packed and listened to the staff complain about getting Austin Ale House’s mail. En route, adding to the pile of lemons, Patrick got a call from his work letting him know he’s fired, blaming the time off he takes to go on tour.

The guys were able to fit into a later slot at the right venue, which worked out because (as our story partly shows) 1:00 pm SXSW time is like 9:00 am normal time. Everyone’s still waking up and knows very little about what’s going on. As a side note, let this be a lesson to all you aspiring musicians: if you show up to a music festival with your equipment and say you’re the band they booked, you could just con your way into a nice showcase. In the festival chaos, nobody’s sure of anything.

After that set, the band had enough time to tear down, pack up, and head directly to Cheers Shot Bar (also on 6th, but farther down) to load in for their 4:00 show. When we parked behind it on 7th this time, we got an official SXSW artist parking pass from a distracted volunteer, which I used while the band set up to scam a free spot in a church parking garage, claiming I was playing their showcase. I know what you’re thinking — but $20 to park at a church? Who’s stealing from whom here?

FaTL played on the roof of the bar to a more modest audience than they expected. The numbers weren’t much larger for their midnight set. But despite the low turnout, they sweated out their sets like they had packed the Paramount. You could see it in their faces as they played; like the day’s events never happened. Any band strife or personal troubles disappeared when they walked on stage and did what they do best.

“At the end of the day it’s about playing music,” says Dan, grinning in the wake of the 4:00 show, “If you really like it, then you gotta be willing to suffer through the bull-[expletive] for it.” And what more must the band suffer for their music? The answer’s on the road. See you out there.

Not only is he a multi-media journalist, he is also an accomplished musician. He is the founder of SMI and drives the creative look, feel and branding for the publication. His years of writing, arranging, and performing live music in a variety of genres inform his ability to communicate the message and the mechanics of music. Roth’s work on SMI reflects his philosophy that music is the universal language, and builds community. He believes it has the power to unite people of every race, religion, gender, and persuasion.
Related ItemsDerek AubertFox and The LawSeattle Music HappeningsSXSWSXSW 2013
← Previous Story Leo Kottke sells out The Seasons in Yakima (Photo Slideshow)
Next Story → SMI Radio Ep. 87 On Demand: Science! & Nicki Bluhm (Photo Slideshow)