Seattle stars in the new Macklemore and Ryan Lewis video 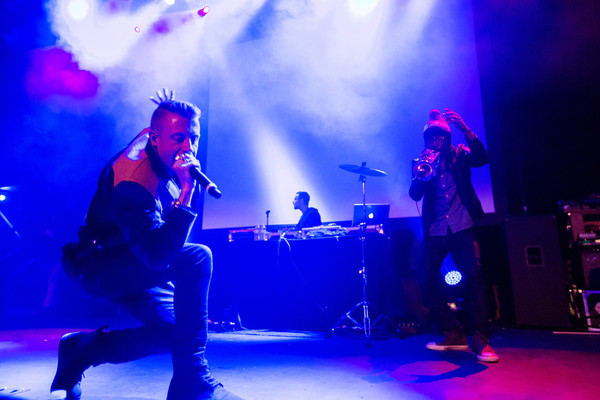 The city of Seattle is the shining star in the new Macklemore and Ryan Lewis music video released last week. The video is for the chart topping duo’s most recent single Can’t Hold Us. The catchy tune can be heard in a recent Microsoft commercial and is the follow up to their mega-hit Thrift Shop.

Like the video for Thrift Shop, this one was directed by on Jon Jon Augustavo (He also directed the Vicci Martinez video “Come Along”) features a menu of Northwest scenes that include snow capped mountains, beach scenes and lush forests, but it is The Emerald City that shines the brightest in the video, which includes a stunning rooftop scene shot last month.

Of course now video featuring Seattle would be complete without Seattle’s most iconic landmark. Thus, The Heist flag flies proudly above the Space Needle.

We shot it on six different continents, It’s crazy. There’s a camel. There’s dogsledding. There are white people, black people, a frat party. We just went for it.

This was over a 16-day music video shoot, which I’ve never heard of before, It was a huge project; it was cut all over the place. We started cutting at South By Southwest, in a little hotel room, and we’ve been finishing it ever since, or trying to finish it. It’s just been a massive project.

Lewis and Macklemore will be headlining Sasquatch! 2013.

Not only is he a multi-media journalist, he is also an accomplished musician. He is the founder of SMI and drives the creative look, feel and branding for the publication. His years of writing, arranging, and performing live music in a variety of genres inform his ability to communicate the message and the mechanics of music. Roth’s work on SMI reflects his philosophy that music is the universal language, and builds community. He believes it has the power to unite people of every race, religion, gender, and persuasion.
Related ItemsMacklemore and Ryan LewisSeattle Music HappeningsThe HeistThe Space NeedleVideo
← Previous Story The Rock and Roll Hall of Fame has Heart (Interviews)
Next Story → SMI Radio Ep. 91 On Demand: Carrie and Kristen Watt (Seattle Living Room Shows 5 Year Anniversary Special)