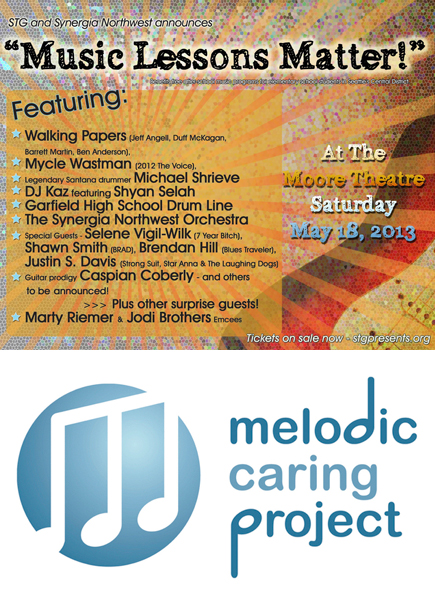 Synergia Northwest will present Synergia Northwest presents Music Lessons Matter “Live,” at the legendary and historic, Moore Theater in Seattle on Saturday, May 18th. Proceeds from the event will go to benefit music programs throughout the state of Washington.

Melodic Caring Project will be streaming the concert via UStream. to a very special audience battling serious medical issues.

Given the fact that the show will be streamed to children and teens in the hospital, MCP and Synergia Northwest make for a natural partnership.

MCP is driven by the husband and wife team of Stephanie and Levi Ware. They have seen first-hand that people from other cultures and ethnicities respond to songs with lyrics they couldn’t even understand because music can be felt and understood.

MCP  is about one artist [or band] playing a LIVE and extremely personal concert for a select group of patients. That performance is filmed and streamed LIVE directly to the patients hospital bed [or home] where they can watch the show in the comfort and anonymity of their own room. Through a live-chat feature on the Ustream page, patients can chat throughout the concert with friends, family and outside supporters sending real-time messages of love and encouragement, creating a true sense of community and support. This unique service is free to the patient and free to the hospital.

Like past Synergia Northwest shows that took place in 2010 and 2011, the special concert will feature the Synergia Northwest Orchestra, alongside of some of the Pacific Northwest’s most high profile rock and pop recording artists and selected student musicians.

Synergia Northwest concerts have helped contribute to Music Aid Northwest in bringing its“Music Matters” license plate fundraising proposal to fruition by raising capital and awareness to create a music-themed license plate. Via sales of the plates, school music programs receive the assistance needed so that current and future generations will have the opportunity to participate in music programs.

Like in past years, the concert will feature the Synergia Northwest Orchestra alongside some of the Pacific Northwest’s most high profile rock and pop recording artists and student musicians.

The night will also include some surprise guests. ‪Beloved Northwest radio personality Marty Riemer and  Jody Brothers will return to emcee this year’s event. As part of the evening’s multiple performances, the concert will again highlight a special musical tribute. “Music Lessons Matter” will feature a tribute to the music of The Rolling Stones; past tributes have included music from The Beatles and Sir Elton John.

For the past three years has attracted a several prominent artists representing a variety of genres. Past performers include who  have appeared with the Synergia Northwest Orchestra have included members of  Pearl Jam, Alice In Chains, Alan White, Blues Traveler, Tracy Bonham, Queensryche as well as other internationally recognized artists who call Washington State their home.  The concerts have also shined the spotlight on the area’s unique heritage and rich, diverse music community, such as the groundbreaking music of the late artist and Northwest Native American Beaver Chief, KOKON Taiko with the Seattle Seahawk’s Blue Thunder Drum Line and Dora Oliveira’s Samba Reggae Revolution.

The efforts of Synergia Northwest events over the past few years have contributed to Music Aid Northwest in bringing its “Music Matters” license plate fundraising proposal to fruition by raising funds needed to create a music-themed license plates.

Proceeds from the plates helps to support school music programs. Music Matters license plates can be purchased through any Washington State Department of Licensing (DOL) office.

“We definitely are making an impact and as we grow this thing year to year we foresee more opportunity for young kids to be involved in music programs.” said Executive Producer and Music Director Michael McMorrow. “The absolute uniqueness of this event coupled with the vast talent and community oriented business leaders right here in the northwest are creating the perfect storm for success. 2013 will be a banner year for Synergia Northwest.” Seattle musician McMorrow also has hinted to other projects involving student musicians that are in various stages of development.

Seattle Music Partners believe that providing a child with the opportunity to build a foundation of musical skills, coupled with the strength of a mentoring relationship; help foster self-confidence and an overall engagement in learning.

Scott Gelband, Executive Director of SMP shared: “We are thrilled to partner with Synergia Northwest for this year’s show. SMP has been working with students in low-income schools for more than a dozen years and the opportunity to trumpet our program as part of a community event of this scale is fantastic!  Thank you for shining a spotlight on our organization and those we serve.”

Synergia Northwest Presents blends classical, contemporary, professional and student musicians into one evening of performances that unifies cultures and musical genres. The caliber of these artists, all with Washington State ties, along with a world-class conductor and orchestra has promised an evening of unforgettable musical moments that have left audiences knowing they’ve just experienced a magical event.

For past coverage of Synergia Northwest go here.

To find out more about Melodic Caring Project, donate or stream a show, please visit http://www.melodiccaringproject.com.

Not only is he a multi-media journalist, he is also an accomplished musician. He is the founder of SMI and drives the creative look, feel and branding for the publication. His years of writing, arranging, and performing live music in a variety of genres inform his ability to communicate the message and the mechanics of music. Roth’s work on SMI reflects his philosophy that music is the universal language, and builds community. He believes it has the power to unite people of every race, religion, gender, and persuasion.
Related ItemsBarrett MartinCaspian CoberlyDuff McKaganDuff McKagenMelodic Caring ProjectMichael McMorrowSeattle Music HappeningsSelen Vigil-WilkShawn SmithSynergia NorthwestTess HenleyThe Walking Papers
← Previous Story SMI Celebrates 2 year partnership with NWCZ Radio on 5/17
Next Story → Community mourns the passing of Felipe Canete from Luc & The Lovingtons