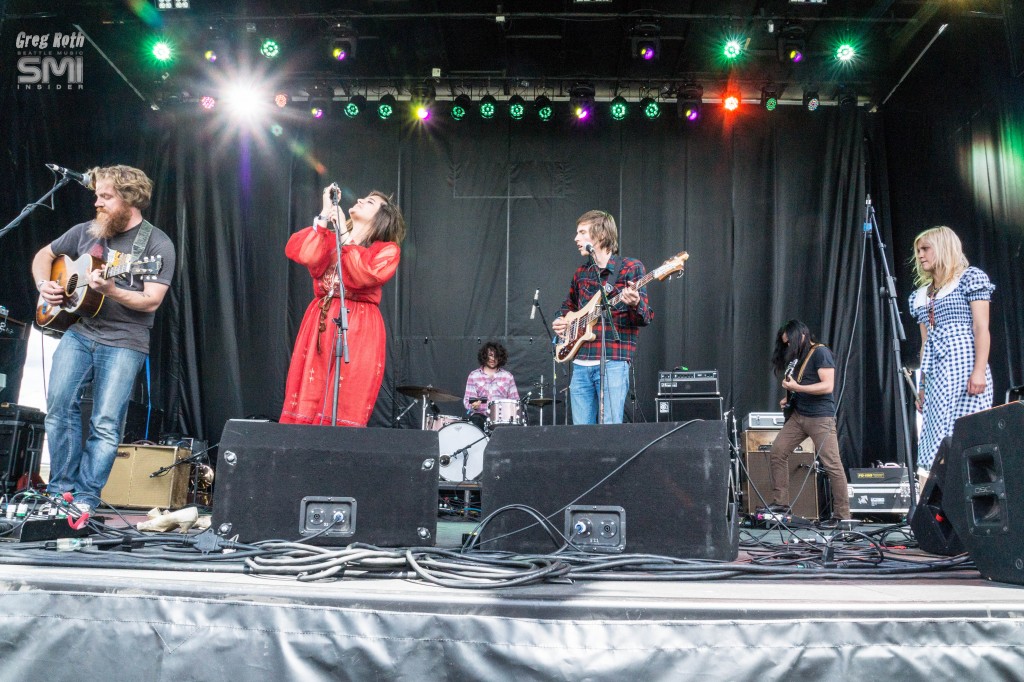 Buzzworthy electronic artists, moody punk rockers, and booming hip-hop acts are taking over this weekend. Here’s your guide to Capitol Hill Block Party and the top acts you won’t want to miss.

Flautists rejoice! Rose Windows have made the flute badass again. The groups debut record, The Sun Dogs, on Sub Pop re-envisions groups like Cream and the darker sides of Fleetwood Mac as a blistering,  21st century fever dream. Combine that with baroque pop-sensibilities and you have a massive sound waiting to be devoured.

FF’s music was made for the punk cassette aesthetic. Manic guitar riffs layered with monotone vocals slurring in an apathetic tone. The hooks are catchy and grimy. The Barboza stage couldn’t be a more perfect sweat box to experience the FF live.

Pickwick have become local favorites over the past couple of years. Much of this can be cited back to their passionate, perspiration fueled live set. Galen Disston’s soaring vocals tend to invigorate the audience as he commands them to “do the Ostrich” or just to move in general. It’s indie rock’s take on classic 60s and 70s R&B.

Girl Talk is the person who walks into the party and everyone cheers. He is the life of the party. Greg Gillis’ mash-ups, which fuse everything from hip hop and electronic to rock and soul, have rightfully garnered him that reputation. If you’ve ever wanted to hear UNK’s “Walk It Out” segue into Twisted Sister’s “We’re Not Gonna Take It” then this is your opportunity.

This Scottish folk band may seem a bit out of place given this year’s heavy focus on electronic music, hip-hop, and punk. Delving into the band’s lyrical prowess, it’s clear these guys have just has much edge and ferocity as anyone else playing this weekend. They play triumphant instrumentals and sing like spitting venom.

Everything about Naomi Punk is ambiguous. They keep details about themselves and their music as private as possible. Even the lyrics are hard to distinguish in the music. But when you get past the mystery, the band is a startling interpretation of punk rock, drone and shoegaze. It feels melodic even when it’s indistinguishable. This set is sure to be loud, and rightfully so.

Fans at The Postal Service show last week at Key Arena did not know what they were getting into. Big Freedia is a flagship artist of the “bounce” genre. She takes hip-hop and dance beats and creates completely infectious hooks – most notably about ass. Yes, there are women twerking the whole set. Don’t be scared. This set promises to be one of the liveliest dance parties of the weekend. Embrace the ass.

Dark pop music may be the unspoken theme of the weekend, but Purity Ring embodies it the most. Their 2012 album Shrines took 80s Top 40 decadence and doused it in the moodiness of The Cure. Synths abound on these tracks. Their set will be the perfect opportunity for moody shoulder dancing and arm waving.

El-P and Killer Mike go hard. These guys aren’t too light hearted. If you look at their collaborative Run The Jewels LP and solo discographies, it’s apparent they both have a lot to say and say it loudly. El-P’s beats bang devilishly as he and Killer Mike rap about what they’ll do to anyone who gets in their way. The energy between these two on the album is almost palpable, which means it can only be bigger live.

Choosing the headliner as the top pick may seem like a cop out, but not when it’s The Flaming Lips. Wayne Coyne and the guys are on another level altogether. Zorbs, confetti, Telletubies, a light show and rainbow themed everything make the band’s live set up more of an experience than a traditional concert. With the release of this year’s brooding and beautiful album The Terror, there’s high anticipation to see what the Lips will bring to the streets of Capitol Hill.

Not only is he a multi-media journalist, he is also an accomplished musician. He is the founder of SMI and drives the creative look, feel and branding for the publication. His years of writing, arranging, and performing live music in a variety of genres inform his ability to communicate the message and the mechanics of music. Roth’s work on SMI reflects his philosophy that music is the universal language, and builds community. He believes it has the power to unite people of every race, religion, gender, and persuasion.
Related ItemsBig FreediaCapitol Hill Block PartyDusty HenryFrightened RabbitGirl TalkNaomi PunkPickwickPurity RingRose WindowsRun The JewelsSeattle Music HappeningsThe Flaming Lips
← Previous Story Bob Log III is a one man entertainment unit at Crocodile (Photo Slideshow)
Next Story → Phish kicks out the jams for 2 Days at The Gorge